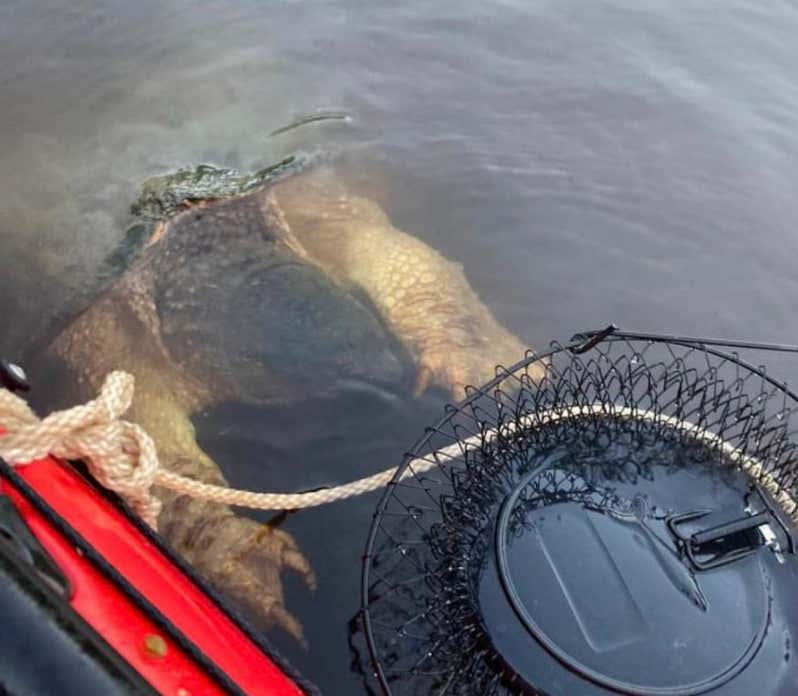 Common snapping turtles are some of the most interesting creatures that roam the United States. Absolute units of turtles that have roamed this earth since the time of dinosaurs. They spend their winters underneath the ice and are often seen coming out of the water to lay eggs. This particular gigantic snapper was most likely trying to fuck that fish trap its next to. The circular fish trap probably looked like a possible female, and that turtle's mantra on mating is probably "If it's rounded, it's getting pounded". No doubt, these are some of the horniest reptiles in the northeast.

These aren't even the largest Snapping turtles because the Alligator snapping turtle is fucking gigantic and they are the southern cousin of the common snapper.

I also just found out there are hybrids of both snapping turtles which is pretty goddamn cool.

These turtles have a common ancestor that probably ate dinosaurs. If you can see this basketball-sized head, you probably could imagine the car-sized body that would be behind it.

The Ogua is a native American legend of a giant snapping turtle that used to come on shore and eat deer. A legend in West Virginia, this cryptid may have been inspired by an actual gigantic snapping turtle.

FAIRMONT, W.Va. – A 20-foot-long monster is said to lurk along the Monongahela River in Marion County. This river monster has had several names over the years; the Rivesville Monster and the Hoult Monster, but it is most commonly known as Ogua.

The Ogua is said to be a 500 pound, giant alligator snapping turtle-like creature.

“The Hoult Monster is very much like a giant turtle, and it has its bases in prehistoric animals. There were giant turtles in this area if you go back through that time,” West Virginia Storyteller Jason Burns explained.

This giant turtle monster is most known for its ability to come onto land and crush deer whole. The Ogua was first reported back in 1745, by a family living in Hoult, W.Va.

The legend tells of a 12-year-old boy, who allegedly was pulled under the water by the Ogua while fishing with his family. The boy was never seen again.

Since then, others have reported spotting the Ogua all around Marion County.