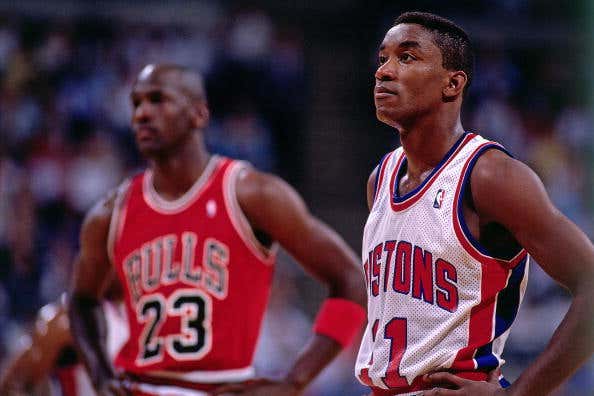 Live look at MJ after hearing that quote

On one hand, I love a good grudge. Who doesn't? Where's the fun in being the bigger person and maybe moving on when you could instead hold a grudge against your enemies forever? Maybe that's childish of me, but when it comes to sports and the NBA, I am ESPECIALLY in favor of grudges.

Which brings me to Isiah Thomas and MJ. A beef as old as time that dates back decades. If you remember, rumor has it that Jordan was the reason Isiah didn't make Team USA

even though in The Last Dance, which was obviously mostly just some Jordan propaganda during quarantine, Jordan tried to make it seem like he wasn't involved. Who believes that? Of course he was. It's OK! The Bulls and Pistons had bad blood back then.

Well ever since that moment, Isiah has done everything he can to continue this beef

basically any chance Isiah has had to throw some shade at Jordan he couldn't help himself. That's holding a grudge 101 really. On some level I kind of respect the commitment to the bit. He probably knows there's a tiny bit of MJ that gets annoyed when people call LeBron the GOAT, so none of this stuff is an accident when it comes to these two.

Here's where I think Isiah is going to run into some trouble though. There is NO CHANCE MJ still gives a shit about a beef with Isiah Thomas. If he thinks there's going to be a public apology from MJ about that documentary series or the Team USA stuff, I don't know what planet Isiah is living on. Jordan has the Hornets to worry about golf to play and gambling to do. This might be one of the true one sided beefs we have in sports given that Thomas clearly still cares and is upset about it while Jordan seems to not give a shit because he's Michael fucking Jordan. It wouldn't shock me if he hasn't thought about Isiah and Team USA since The Last Dance premiered.

I can't really speak to the West Side of Chicago aspect of Isiah's quote because I've only been to Chicago once while I was driving across the country. We got into the city around midnight in a snowstorm and basically went right to our hotel. I took my St Bernard Larry (RIPIP) for a walk by the bean and then passed out. By morning, we were on the road again, so I'm not too familiar with the city. Either way I'm pretty sure Jordan doesn't care where Thomas is from, so I'm not sure what he thought he was accomplishing by saying that? Is that supposed to scare Jordan into apologizing or something?

I know we basically never hear from MJ these days, but I feel like this is the perfect opportunity. Have the Jordan Brand tweet out that gif at the top of this blog or something. If we're gonna beef, let's beef! Because we all know Isiah can wait around for the rest of his life if he wants, he's not getting that public apology.

I'll give Isiah credit though. Those Bulls/Pistons games were must watch back in the day