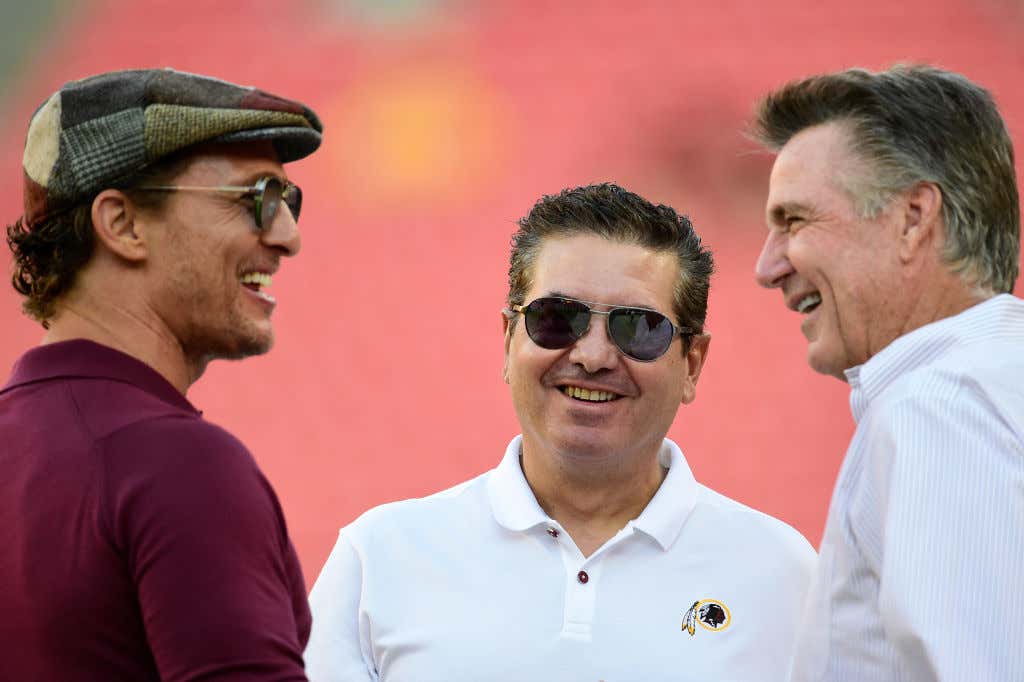 “Matthew has always been a huge fan and his ties with the team go way back,” the source sad. “They support his foundation and he’s good pals with Dan Snyder — he and [supermodel wife Camilla Alves] were on Dan’s yacht over the Super Bowl last year.”

A rep for the “Magic Mike” actor was unavailable for comment.

The Bezos/Jay-Z bid is expected to come in January, The Post has previously reported, with the longtime friends set to join multiple suitors for the team.

Well hot dog. This is really happening and it's all coming together. It's crazy- Snyder is really selling. Sometimes during the day I catch myself smiling, just thinking about it. It's really happening, we will soon be free from the worst owner to ever do it. And sure it's all rumors, but everywhere you turn it seems the ticket of Bezos and Jay-Z will be hard to beat. After all, Bezos has all the money in the world and Jay Z has a decent bank account himself. And now add in Mr. McConaughey and we're cooking with gas, folks.

It doesn't stop there though. Kevin Durant wants to be involved, Dale Jr might want a piece, all the guys. It's especially funny to me because I've been jokingly but not jokingly at all tweeting at these guys for like 6 years asking them to buy the team. All the big fans- KD, Dale Jr, McConaughey, Alexis Ohanian, Wale, Joel Madden, Jon Bernthal, and most recently added to the list, Laz Alonso (Mother's Milk from "The Boys"…no brainer). And now like the Power Rangers, with their powers combined, they might actually be able to pull it off.

And hey, who knows, maybe they'll slide me a sliver of a %. Nothing crazy. Like .01% or something….Ok I just did the math, and unless I did it wrong, .01% of $7 billion is still $70 million. LOL. This is just fake fucking money. But nonetheless. I digress. These guys have the real, reallllll money and hopefully they put together an awesome ownership group and we never hear from god damn Dan Snyder ever again. What an upgrade it'd be. Swapping in Jay Z. And it might be a reality by the time next season starts. It's really, truly happening. Smiles.