Uh, quick question - dafuq was that? What's goin on here? Why's the chimp bald? I didn't like that one bit.

Obviously Conor McGregor's love of gorillas/monkeys has been well documented over the years - look to the big ape munchin on a heart inked on his chest if you didn't know that…. 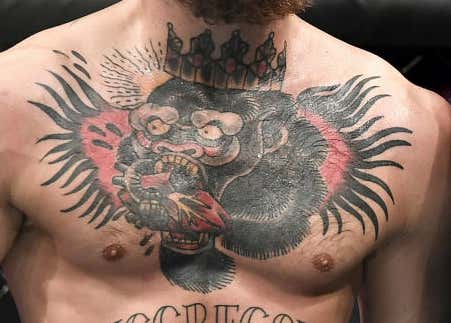 ….but our guy is turning into the Chimp Chimp right in front of our eyes!

Get it? Chimp Chimp?

I don't know what the purpose of that video (or mask) was, or what that strange demon voice he was using was all about, but that's Conor for ya. He'll keep ya guessing alright.

I've been getting a lot more tweets/DMs lately asking when we'll see McGregor back in the octagon, but unfortunately, I don't really have any answers for the people out there. Conor's looking fookin MASSIVE for his role in the new 'Road House' with Jake Gyllenhaal….

….and he's not in the USADA drug testing pool right now - which you need to be in for six months before the UFC can book you a fight - so it'll be at least that long. Til then, enjoy Conor's weird ass use of social media.