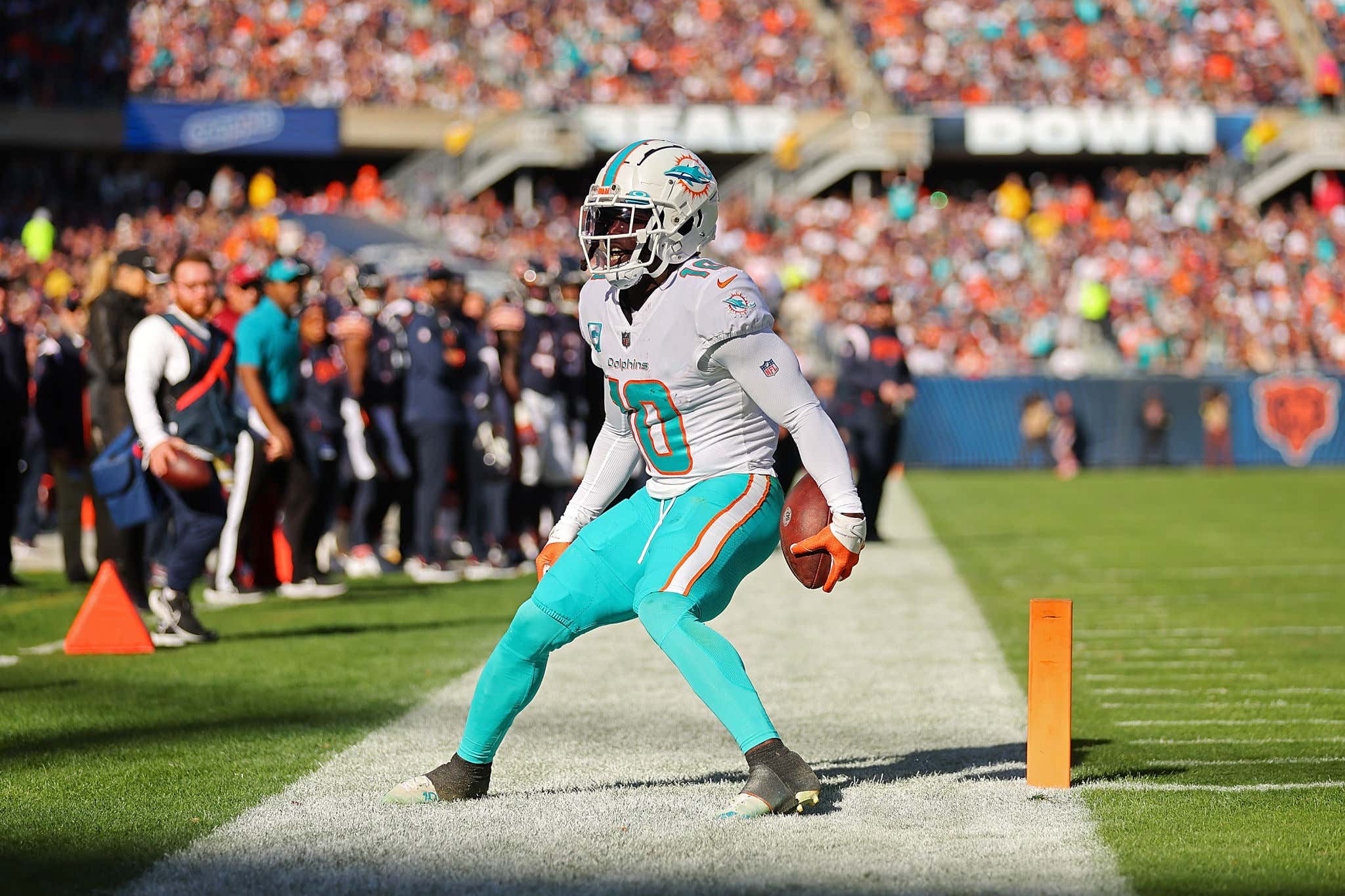 The Dolphins got a win on Sunday and improved to 6-3; it was their third straight win since Tua Tagovailoa returned from concussion protocol. They, however, were fortunate as the game could and perhaps should have gone the other way. Like their wins over the Steelers and Lions, the Dolphins sat on their lead in the fourth quarter and were fortunate to hold on as the secondary was carved up, while Justin Fields set an NFL regular season record by rushing for 178 yards as a quarterback. The Dolphins got an assist from the officials as Keion Crossen got away with a blatant pass interference penalty on the Bears' final drive, pulling down Chase Claypool on a pass that would have given Chicago the ball in field goal range with time to score a winning touchdown.

The Dolphins won the game with their offense as Tua Tagovailoa remains unbeaten in games he starts and finishes. The Dolphins are 0-3 when he misses a game or is knocked out. With 1,980 yards in six and a half games, Tagovailoa has been getting MVP buzz. More important than his yards is that Tua has kept his mistakes to a minimum with three interceptions and 15 touchdowns. The more impressive numbers belong to Tyreek Hill, who has cemented himself as the best receiver in the NFL. The record of 1,964 yards set by Calvin Johnson is within reach of Hill, as he has 1,104 yards in nine games. Hill could be close to embarking on the greatest receiving season in NFL history, but can he get consideration in a league where the MVP has become the best quarterback award? Tua should be silencing the critics who say he cannot play in the NFL, as he has been nothing short of remarkable. However, since he is left-handed, he is considered awkward at passing and does not get the respect he deserves. It should be noted that Tua was not sacked on Sunday, as Terron Armstead and the Dolphins' offensive line had a great game without the wretched Liam Eichenberg.

While the offense did a great job, and Jeff Wilson Jr. had a strong debut, the same cannot be said for the Dolphins and Bradley Chubb. Several times Chubb missed tackles on Just Fields, who made the Dolphins' defense look silly. Miami is still dealing with a banged-up secondary, as Byron Jones remains on the PUP list. Keion Crossen was burnt several times and is fortunate the officials were in a daze because he should have been called for pass interference on Fields' deep pass to Chase Claypool. From where I sat in the last row of the far end zone, I could tell it was a pass interference and thought it was sure to be called, but luckily it was just a hot dog wrapper.

Thanks to Mikey Bets, I was somewhat able to attend the game. He had what the Bears called VIP Skyline Suite tickets. Instead, they were in the back row of the end zone, with a view of the skyline behind the suites, with two poles blocking a view of the field. Getting to those seats was a chore, as the lone elevator at Soldier Field was not working. There were no escalators, but plenty of ramps as we had to go up and down due to the stadium not being perfectly accessible from all levels. The concourses were narrow, causing a traffic jam as fans tried to get to their seats. In short, Soldier Field is a dump, easily the worst stadium in the NFL. The Bears deserve better. Soldier Field had Roman Columns overlooking the field at one time, but a 2003 renovation had a spaceship land inside the stadium, ruining its aesthetic while not increasing seating capacity. As traffic was backed up, getting in and out of the stadium was difficult. The outside views, where the columns still stand, were excellent, as were the Chicago skyline view and Lake Michigan. However, this team and fan base need a modern stadium and need for the Arlington Heights project to happen. Hopefully, the next Dolphins' game in Chicago will be in a state-of-the-art venue.

Here are my TikToks from the game