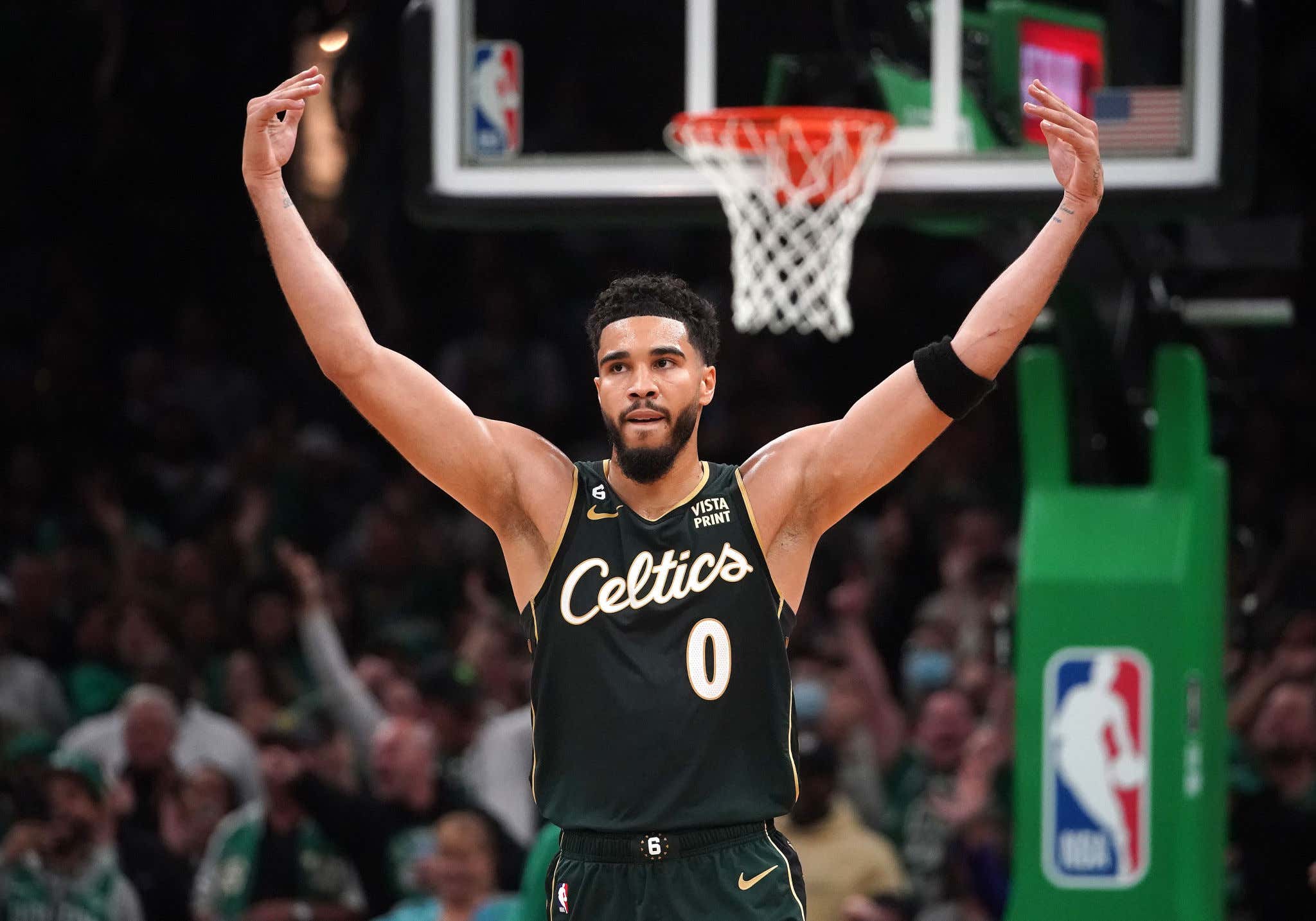 If you've watched the first 9 Celts games of the season (6-3), one thing has probably stood out to you. It's something that deep down we as fans were hoping to one day see, and it's something that you could argue is the key to the entire journey of getting back to the NBA Finals and this time getting over the hump.

So what is it? Jayson Tatum has taken perhaps the most important leap of his career.

Every season we usually see Tatum come back with something new to his game. One year it was his development as a passer and playmaker and how he was able to read/react to defenses. One year it was the sidestep three/pullup three that has become one of the most lethal combinations in his offensive arsenal. One year it was a leap defensively.

Those improvements helped him become an All NBA player and his team continue to make deep playoff runs, even finally breaking through to the NBA Finals. As we know, Tatum struggled in that final test and the Celts fell short. He came into this season talking about how much he was molded by that pain, and how he vowed to be better. That takes me to this current version of Jayson Tatum.

To put it simply, he's in the MVP conversation right now, and rightfully so. It's not just because of the eye test either, despite the eye test looking fucking incredible

I wanted to know what's truly changed about this version of Tatum. I've seen him look like the best player on the planet before, so what gives? What you see is a player that is starting to enter his early prime who is starting to address his problem areas. Allow me to explain.

If there was one thing you probably wanted when it came to Tatum's offensive game, it was for him to consistently be aggressive. Don't shy away from contact but rather use his size and strength to seek it out. Earlier versions of Tatum would instead choose a weird contested fallaway jumper that never seemed to drop. This year? It's been near perfection.

Take his FTA rate for example. For Tatum's career, he's at 27%. Last year was the highest of his career (30%) which was a trend in the right direction but still left more to be desired. This season? Tatum currently sits at a FTA rate of 41%. It should then not surprise you that he's also experiencing the highest FTA average of his career, at 8.1 FTA a game. That number is good enough for 9th in the NBA, and if you look around a lot of the other MVP-type guys at the moment (Giannis, Luka, Morant etc), all of them are in the top 10 or higher in FTA. That shows not just a certain level of aggression in their play style, but that the whistle they get can be pretty generous. Now that Tatum isn't playing soft and is instead attacking defenses and looking for contact, he's starting to get that same whistle.

I think most of us thought that if Tatum could get his FTA into the 8-10 range, then a 30 point scoring average was a given. Well, at 8.1 he's currently averaging 30.3 points which is 8th in the NBA.

Now that we've checked that box, let's talk about another leap in Tatum's game. Remember how frustrating it would be when Tatum would get to the rim/deep in the paint only to miss? It made no sense that this man couldn't hit a layup or a floater. This season, Tatum has been finishing better at the rim than he has at any point in his career

This season? Tatum is shooting a blistering 79.6% at the rim/restricted area (39-49). So, not only is he making a conscious effort to be more aggressive when it comes to looking for contact, he's also showing to be MUCH better when it comes to finishing plays at the rim. If you're curious how that compares to some other superstars, here's a decent list

The exciting part is Tatum's leap hasn't just come via foul hunting or finishing layups. We all know defenses are going to do whatever they can to throw multiple guys at Tatum on the offense end and try to contest every shot he takes. If you don't, all it takes is 1 FGM and the next thing you know Tatum is in a groove.

What has stood out so far about Tatum's shooting is so far he's found a way to become nearly unstoppable on shots that are actually guarded.

The majority of Tatum's FGA are coming in "tight" coverage, and look at that percentage. 62.8%! That means even when a defender is in his face or contesting his jumper, he's still knocking shit down. While I'll concede that a 62.8% probably isn't sustainable, I'd say OK well he probably won't shoot 43.8% on open looks either. There's a balance to be had with all that, but the main takeaway is that even good defense no longer really stops him anymore. If you were curious what that closest defender number was last season, it was 47.9%. That's a massive jump to start the year.

So what could be the reason for such a high number? For me, it comes down to where we're seeing Tatum take the majority of his FGA 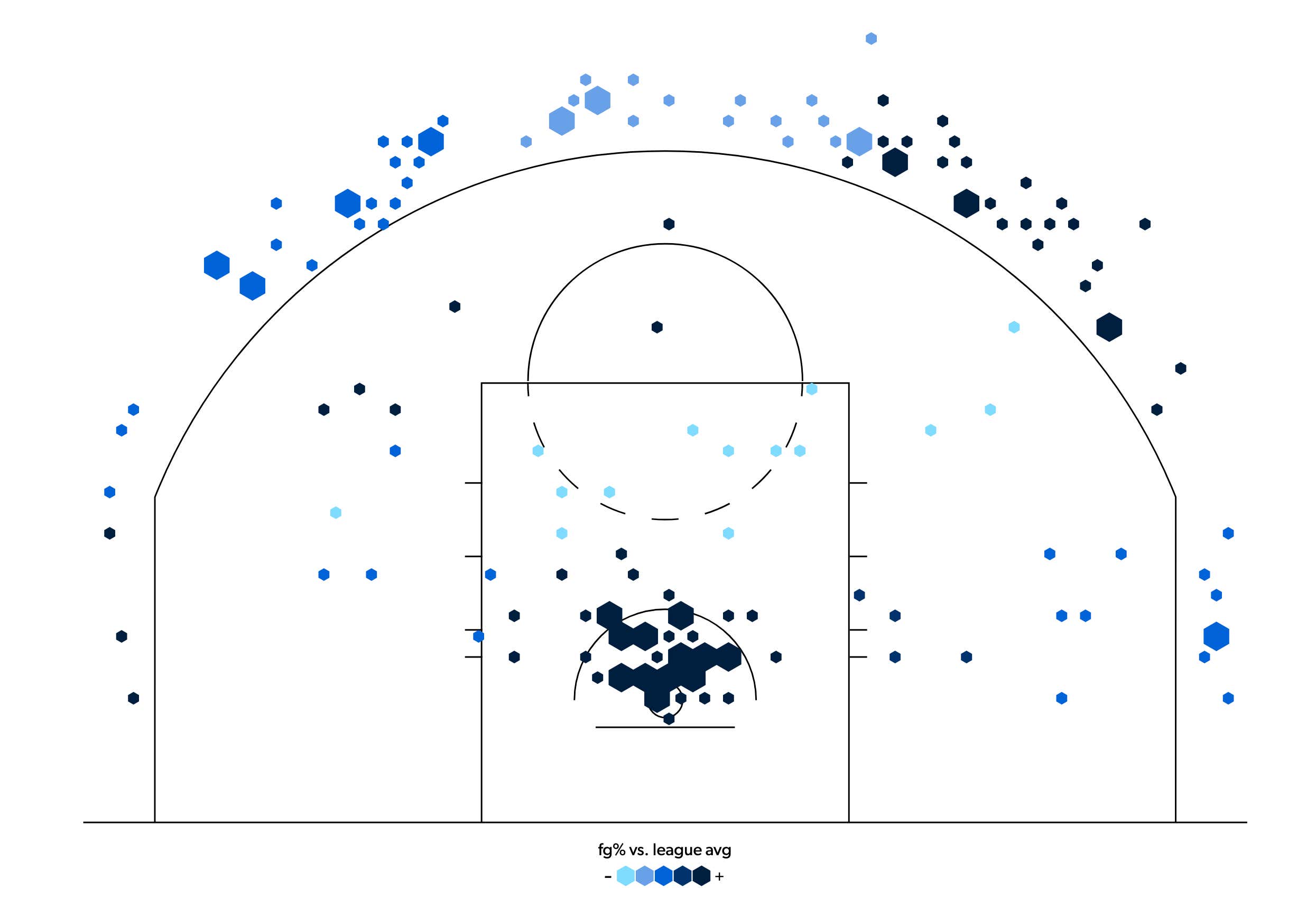 You'll notice there aren't that many brutal long 2s that often times would get Tatum into trouble. There's a clear purpose with his approach offensively. Either take the three, or find a way to get into the paint/at the rim. Last season around 16% of Tatum's FGA were midrange jumpers. This year that number is down to 12% and you'll notice his FTA are up, his scoring is up, and his early season FG% is 50% which is the highest it's ever been to start a season.

So just add it all up.

We're seeing Tatum finally embrace being physical and not shying away from contact. He's living at the line more than he ever has before. He's changed his offensive approach and has eliminated low efficient zones in favor of paint/rim looks and 3PA. He's finishing as well as he ever has before in these zones. All while hitting the boards, creating for others, and playing some of the best individual defense on the team.

There were times in Tatum's career where we would see some of those things and not the others. He showed flashes of what could be possible as we all waited for him to develop. This is truly the first season where you can say that Tatum is putting it all together at the same time. That's why things feel different to start this season and why Tatum is legitimately in the MVP conversation.

We all wanted to see him come back this year and show that he was ready to take a leap coming off that brutal Finals showing. Not only is that currently happening, it looks better than any of us could have possibly imagined.