I'm not the most up to date on the Elon Musk, CEO of Twitter situation. All I know is that the whole thing started with Elon Musk doing an I'm Going To Buy Twitter bit. He ended up taking the bit too far, and accidentally became the owner of a $44 billion company.

I know that some people are happy about Musk buying Twitter, and other people are very unhappy. They're mostly mad about his pro-free speech policy. There are 2 groups of people. One group wants to say racial slurs on Twitter, and the other group wants Chrissy Teigan to preview all tweets before they are sent. I think I have that right.

I guess I'm fine with that. It does seem a little bit lame, though. Suspending everyone permanently seems excessive. But if there is someone who is genuinely, and successfully impersonating someone else, and it's actually causing harm to the person who they're impersonating, or to the people who are falling for the impersonation, then sure, ban away.

But whenever Twitter is deciding whether or not an account deserves a lifetime ban for impersonating someone, I just hope they are considering the following 3 questions.

3. Are the people who fell for it morons?

If the answer to any of these questions is yes, then you cannot ban! Consider Barstool Sports employee Uncle Chaps. Uncle Chaps famously "impersonated" Jay Glazer on Twitter. He changed his picture to the same avatar as Jay Glazer, and changed his Twitter name to Jay Glazer. The handle @UncleChaps remained unchanged. Uncle Chaps then "broke the news" that Oliver Vernon signed with the Jacksonville Jaguars for 4 years, $75.5 million. 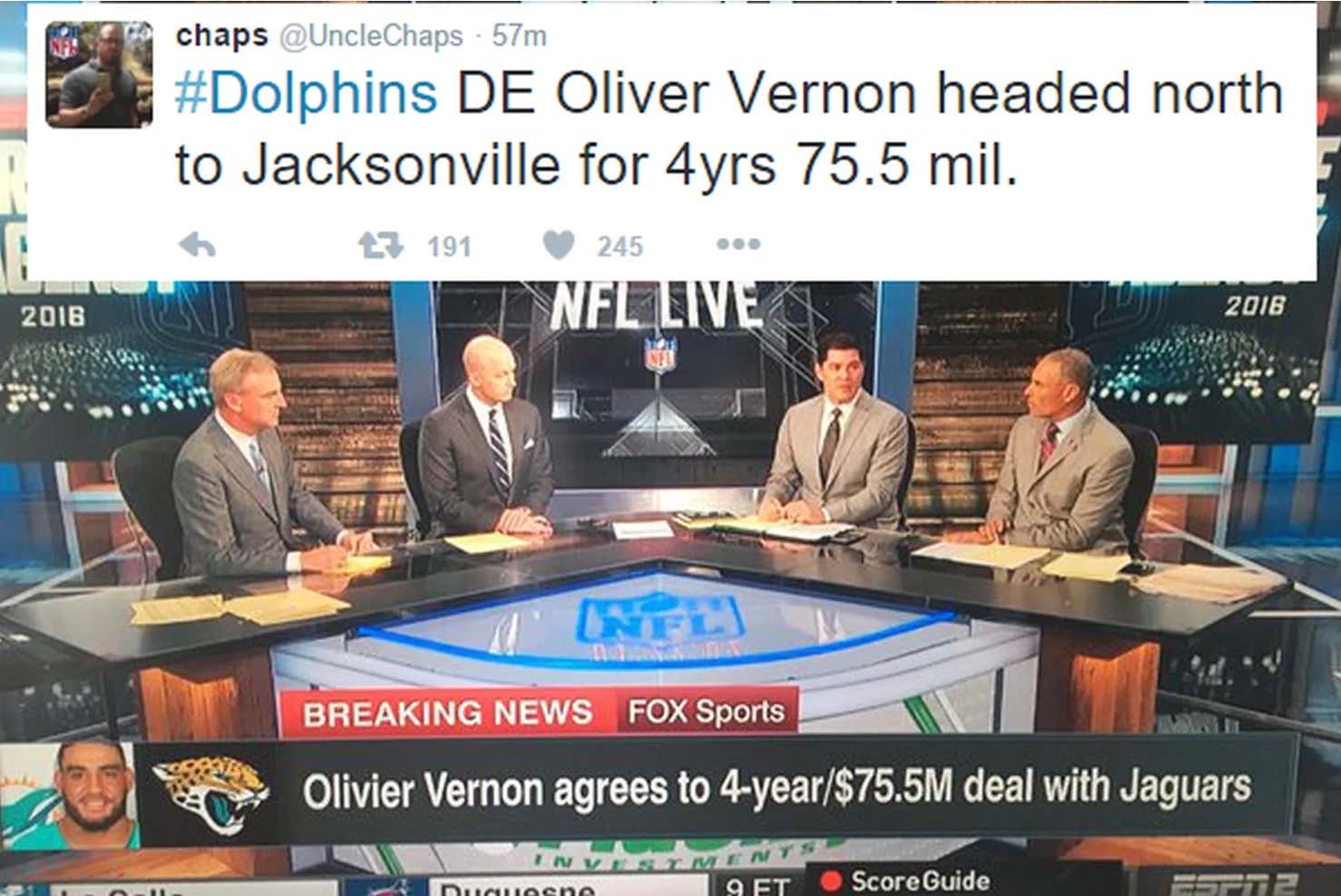 This is objectively funny, and the people who fell for it (ESPN) are objectively morons. It's really that simple. There's probably someone out there who would argue, "Imagine being Olivier Vernon's family, and you're just sitting at home, when all the sudden you think you're moving to Jacksonville. That could be stressful!" or something along those dumb lines.

To that I say, "Consider question #3: Are they morons?" At some point, the people who are dumb enough to fall for this type of misinformation need to be held accountable. Be mad at ESPN, don't be mad at Chaps. The problem is with the person who reports misinformation without checking sources because he's so obsessed with being first. He's the one who should be punished. If you're an ESPN employee who fell for this, then you're probably not fit to be doing your job. I would argue that Uncle Chaps did ESPN a favor by helping them identify the company morons.

I wouldn't hate the rule if we could have common sense about it. If someone does something insane, like reports that there's shooter on the loose, or reports something that really does harm someone, then they deserve to be banned. Unfortunately, Twitter almost certainly will not use common sense, and people are going to start getting banned from Twitter for harmless pranks.

I was on the fence about which way to take this article. Kathy Griffin is one of the worst, least funny people on the planet. I by no means want people to interpret this as me going to bat for Kathy Griffin. When I saw the news this morning, my first thought was, "Oh that's great, I hate Kathy Griffin." When something bad happens to someone I don't like, it gives me pleasure. By banning Kathy Griffin, Elon Musk has made Twitter a better place for everyone.

Nobody wants to see Kathy Griffin to do anything at all. Especially not comedy. Here's a 43 minute clip of her standup routine.

Did you watch that? Of course you didn't. Nobody did. Nobody has and nobody will. This blog with garner 0 additional views for that video.

But Elon… let's be honest… banning Kathy Griffin is a cheap move, and you know it. A cheap move to try and get a cheap laugh from your Twitter hive, because you're not actually funny enough to get a laugh yourself.

Not a single person thought that Kathy Griffin's account was actually Elon Musk. Nobody even thought about her Twitter name at all. Nobody laughed at it. It didn't upset anyone. Nobody went out of their way to tell their friends that Kathy Griffin is doing an I'm Elon Musk bit. Nobody cared at all. It was tree falling in the forest with nobody around. It might as well have just never happened.

I guarantee this is how it went down. Elon Musk made his new no impersonations rule, and Kathy Griffin changed her name to Elon Musk. Then, a bunch of people who don't like Kathy Griffin tweeted him screenshots of her account. Musk though, "Oh wow, people hate Kathy Griffin, and she's technically breaking my rule. What a great opportunity to gain favor from Twitter, by banning Kathy Griffin, and showing people how cool and relatable I am. Then I can do bits about it after."

He is such a nerd. I'm not mad about Kathy Griffin being suspended for Twitter. But that's a cheap trick Elon Musk, and you know it. Also, you probably just ended up giving her more of a platform. Kathy Griffin with any sort of attention is bad news for the internet. Since she was banned, she has been using her dead mom's old Twitter account to argue with Elon, and do bad ghost jokes.

So thanks Elon. Kathy Griffin is back in the news. I hope it was worth it.