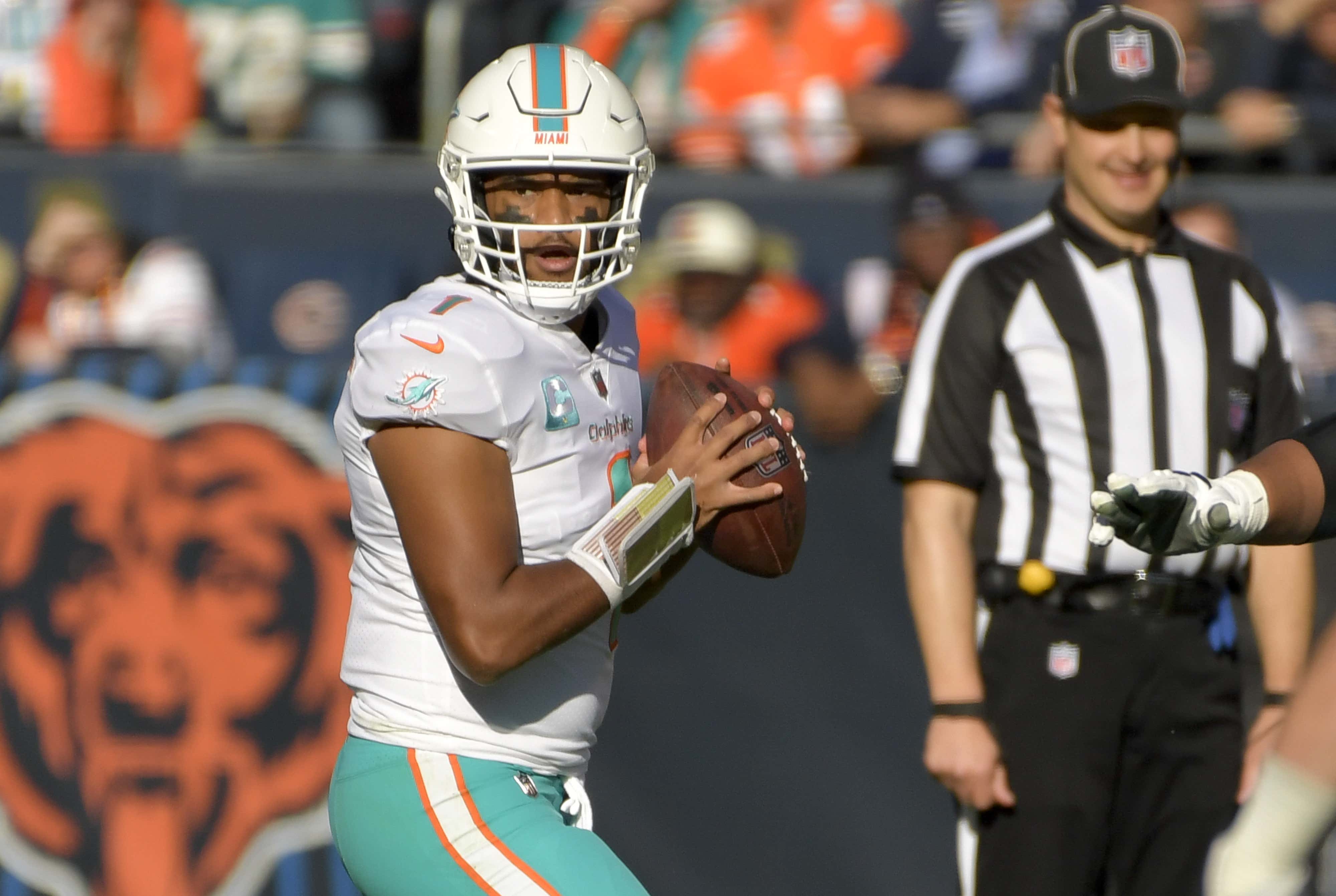 Even just a year ago you would have shut the door in my face before I even had time to look up from my script. You thought it was all a cult. You were an unbeliever. And you know what? I get it - I was too! I only joined TuAnon because it was the underground hipster thing to do on the internet and it allowed me to lookup ridiculous stats that supported the cult in a way that made it clear I was not actually in the cult. For example:

Safe to say there's no way anyone can shut the door in our faces after nine weeks of the 2022 season now. It's time you face repentance. Tyreek Hill tried to warn you all in training camp when voicing his belief and delivering the good news to the world like he was handing out pamphlets. Did anyone believe him? Not really. The talking heads that thought they were just oh so smart still defied Tua. But all the naysayers over time have left their receipts:

With the Dolphins sitting at 6-3 and having beating the Super Bowl favorite Buffalo Bills, I appreciate that you've finally let me in the door and invited me to your living room. Allow me to set my square briefcase down and present to you literature demonstrating why TuAnon is not some conspiracy theory (anymore) and that he will one day bring this Dolphins team a Super Bowl. I know your time is valuable, so I'll stick with a few main passages of scripture you should consider.

You might think TuAnon as just some ritual. But it's actually a sanctuary of mutual spirituals who've actuated their minds to see this all as factual. You might think this a scam that only works on septuagenaries, but eventually everyone will come to believe. TuAnon is very effectual.

You rolling your eyes and getting up from the couch.

All right, all right! Hold on just a minute. I'll stop with the lame Tua puns. I promise. My small Tua leader thought it would play. Anyway, just look at these key Tua scriptures and if you're not infatuated (sorry) then I'll leave.

6-0 in 2022. The only other unbeaten quarterback to do this is Jalen Hurts at 8-0. I'll reiterate that Tua even beat the Buffalo Bills and showed the clutch factor in coming back vs the Ravens. You might wonder if it's really the team around him propping him up but the Dolphins literally lost all three games they didn't have Tua from start to finish.

TuAnon Scripture #Tua - No one in the 2020 draft class has been more efficient than Tua in completion percentage, yards per attempt, and EPA in 2022

It's not the TuAnon way to speak ill of other quarterbacks, but the numbers speak for Tua themselves here. The three columns to the right show efficiency from a few different angles all dominated by Tua thus virtually (fuck) proving Tua put in the work this offseason to make his efficiency habitual (last one promise).

TuAnon Scripture #3 - It's not just the 2020 class. Tua is the most efficient quarterback in the entire NFL this year by far 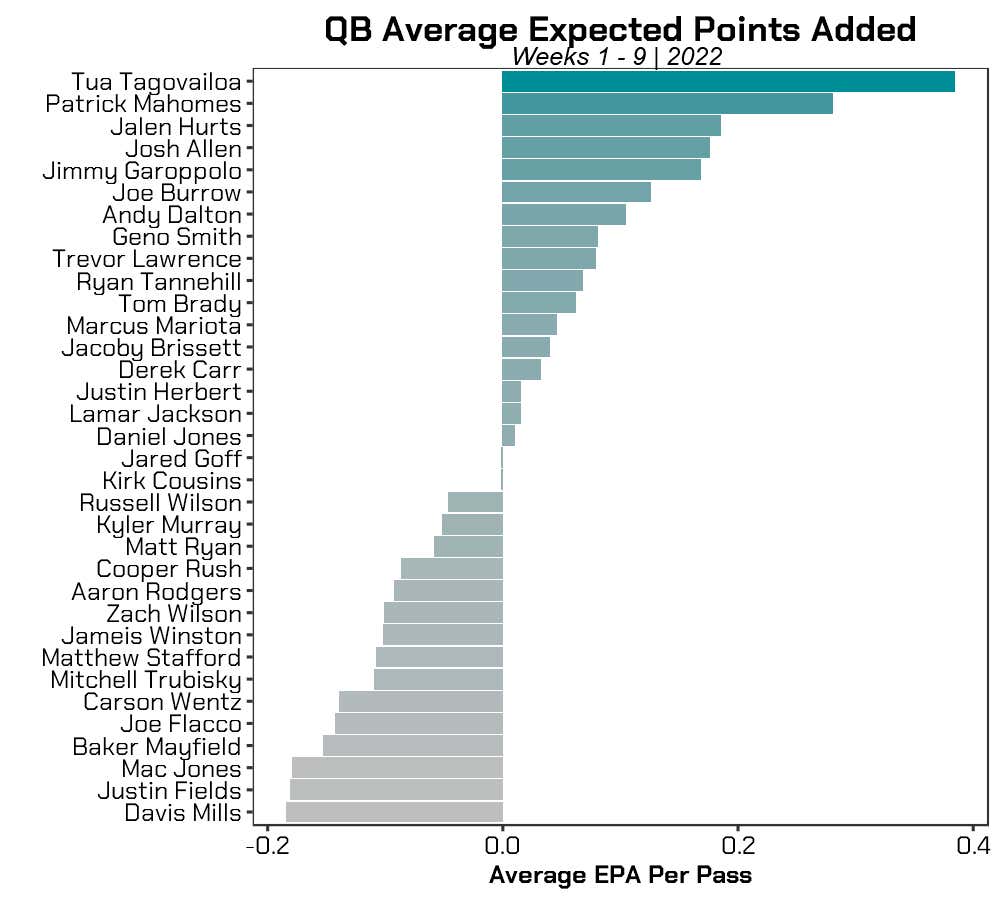 EPA is a model that guesses how many points on a drive a team might score based on down, distance, yard line, etc. After a play, that number changes based on what happened. Tua is averaging .4 EPA per pass attempt which means that every time he throws the ball you can expect almost a half point more on that drive than what was expected the play before. That's pretty damn good. And as you can see above, he's in a tier by himself ahead of Mahomes, Hurts, and Allen. That's good company to be dominating over. Shout out "nice guy" Andy Dalton. How the hell did he sneak near the top of the pack? 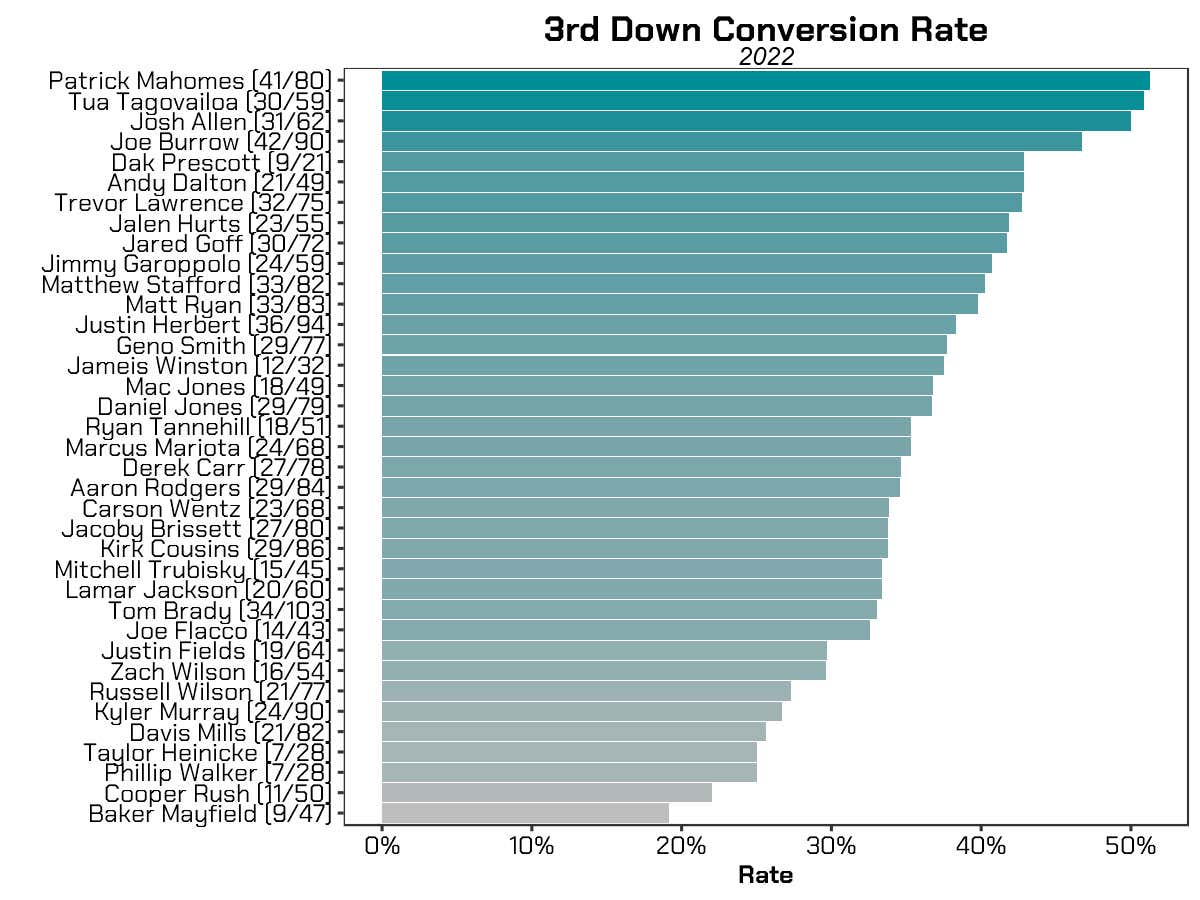 There's no shame in being runner-up to Patrick Mahomes. Ask anyone. Ask Josh Allen. But even so, the margin is razor thin here as Mahomes has converted on 41/80 third downs through the air while Tua connected on 30/59. And wouldn't you just know it - there's Andy Dalton again! Shout out Carolina Panthers for having two quarterbacks qualifying for this list and their best third down converter (Phillip "PJ" Walker) was 35th out of 37.

I think this should be just about enough to convince you that TuAnon is real and that it's time to see the light. He's topped his rookie class and the league overall in efficiency. He's clutch on third down and in coming back from behind to win games. He's undefeated in games played through in 2022. What more is there to prove? Enough of the heresy. It's time to accept TuAnon as the Truth and convert. Join us now. Before it's too late.

If you don't, just remember this. It won't be Tua's funeral. It'll be your obituary.