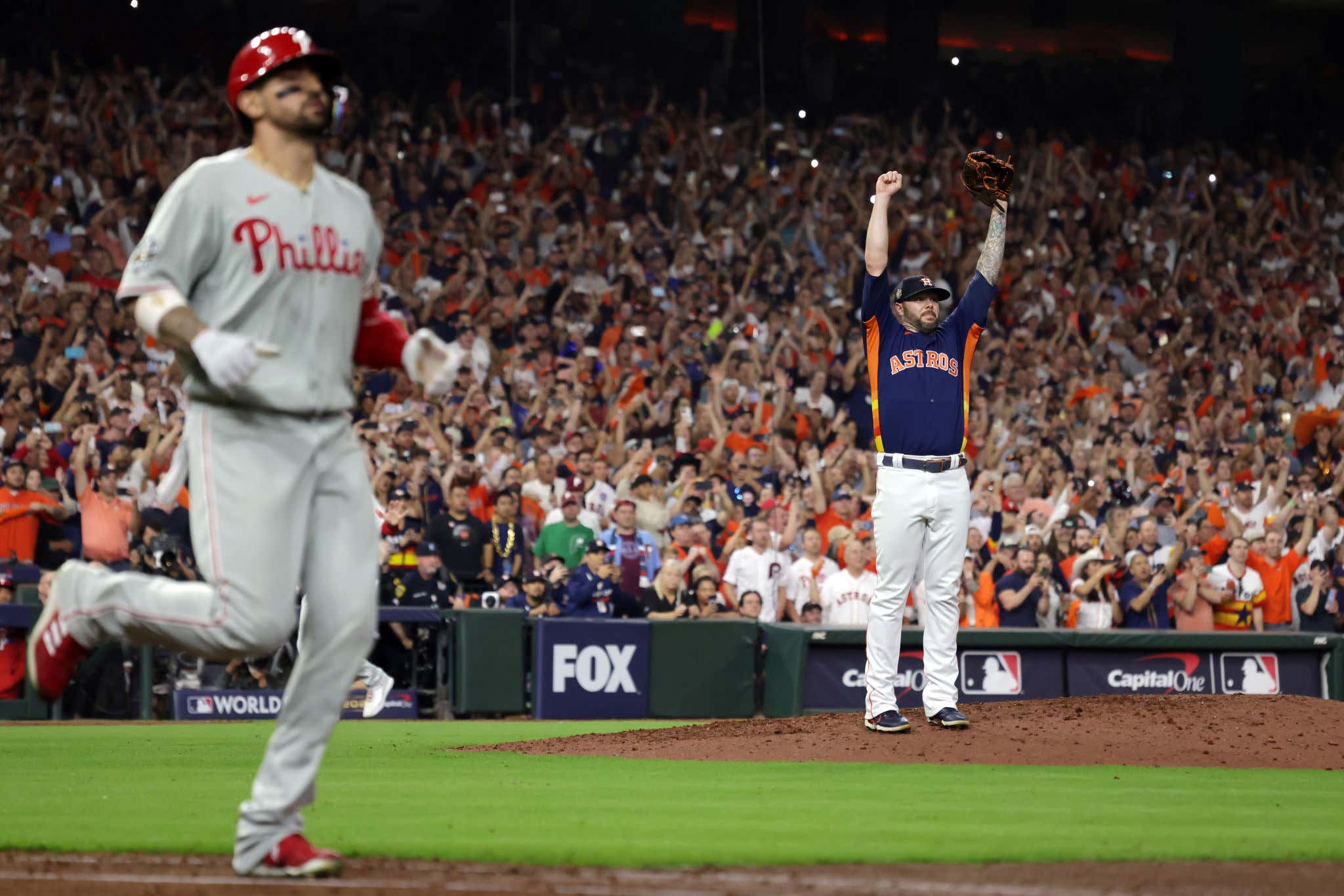 It was all so good just a week ago. The Phillies were bringing the World Series back home tied at 1-game a piece after stealing a game on the road. Just 3 wins away from winning the damn thing with 3 games left to play at home. The Union had just book their first trip to the MLS Cup Final in franchise history. Things were great. We were planning two different parades down Broad Street. And then...

Remember remember the 5th of November. Because no day in the history of Philly sports has ever sucked so much ass.

So on brand for Philly sports that we're literally the first city to ever do it. Now before the idiots in the comment section come crawling in saying "soccer doesn't count", well it's quite literally the only way this would be possible. Call me crazy here but I don't think it would be possible for anybody to lose the World Series the same day as they lost an NBA Finals. I don't think it would be possible for any city to lose the Stanley Cup on the same day that they lost the Super Bowl. The only other possible crossover I guess would be NHL and NBA, but there have only been 3 times since 1993 that a Stanley Cup Final game has been played on the same day as an NBA Finals game.

So the fact that Philadelphia was playing in the MLS Cup Final AND in the World Series should have been the gigantic red flag we all needed to see to realize something historic(ally bad) was about to occur.

Let's start off with the Union first. Now I'm never going to say that losing an MLS Cup is going to be more heartbreaking than losing a World Series. But the fashion in which the Union lost? As big of a Philly meltdown as there's ever been.

For starters, LAFC scored in the 82nd minute to take a 2-1 lead. At that point you figured it was over. Just 8 minutes left to go, it would take something truly magical to keep that game going. And that's when Jack Elliott came in and delivered a header of destiny just 2 minutes later.

Incredible. This team never quits. Never says die. Just minutes away from certain death and they come bouncing right back. And to make things even better, Jack Elliott again scored in extra time in the 124th minute to give the Union their first lead of the day. It was the latest goal ever scored in MLS Cup history.

LAFC's starting goalkeeper had just got down with a gnarly leg injury that also resulted in him getting shown a red card. So the starting goalie was out of the game, LAFC had to play the rest of the match with just 10 men, and the Union score 4 minutes into the 9 minutes of stoppage time added to the end of extra time. Surely this had to be the golden goal. But then there's this guy named Gareth Bale to remember about on LAFC.

The Union were 5 minutes away from being champions. Playing against a backup goalkeeper (who we'll get to in a minute), an LAFC side that had to finish the match with 10 men, and then Gareth Bale comes out of nowhere to deliver a swift header straight to the dicks of Philly sports fans everywhere.

Now we bring up the backup goalie because coming in for the injured Maxime Crepeau was a man by the name of John McCarthy. John McCarthy was born in a little city called…checks notes…Philadelphia. He went to LaSalle High School, played a few seasons with the Union, and found himself in LA this season. The reason this is so important is because it's yet again another heartbreaking wrinkle to this absolute shitstorm of misery we're dealing with in Philly. Because on Thursday night we all had to sit there and watch as Philly native Chas McCormick ripped the souls out of the Phillies with that insane catch at the wall in the bottom of the 9th to rob JT Realmuto of at least a double.

If that drops, then who knows what kind of rally that could have started. The Phillies could have taken a 3-2 series lead with them back to Houston. But no. Chas McCormick had to go and ruin everything. And after already seeing a Philly guy ruin everything for a Philly team, you just had an awful feeling we'd get the same thing out of John McCarthy when the Union and LAFC went to penalties.

The first Union PK went about 30 feet over the net. The next two ended up right in the hands of John McCarthy. Jesus christ. I am so sick and tired of watching Philly guys rip the hearts out of Philly teams.

Okay so we got the Union out of the way. A lead in the 124th minute, they blow it, LAFC goes on to become MLS Champions. Let's check in on another Philly team playing for a championship yesterday.

Obviously the Phillies didn't have a chance to actually win the World Series last night. But every opportunity was there for them to push this series to a game 7. They were getting GAS out of Zack Wheeler. When there was so much uncertainty of how much he had left in the tank heading into this game, he threw non-stop gas while he was on the bump. And in doing so, he gave the Phillies offense a chance to take the lead with the final Schwarbomb of the season in the top of the 6th.

Then we get to the bottom of the inning. Wheeler ends up hitting Maldonado with a pitch when that greasy fuck was crowding the plate and leaned into it a bit. No big deal because on the very next at-bat, he gets Altuve to break his bat and Bohm forces Maldonado out at 2nd. But they can't make the play at first and Altuve is on. Still nothing totally devastating to worry about. Next up to bat comes Jeremy Peña. My least favorite thing about Peña is that there's literally nothing to hate about this guy besides the fact that he's nasty at baseball. He seems like an awesome guy to be around, super likable, I just wish he wouldn't keep killing my favorite baseball team. Which he did again with a hit to center which moved Altuve to third and Peña on first with just 1 out.

That's when Rob Thomson comes out and takes the ball from Wheeler. Now we can argue about this move all we want. Does the game ends differently if Wheeler gets to stay in for the rest of the inning? Maybe, maybe not. We'll never fully know. All we know is the call was made and Wheeler's night was done. In comes Alvarado to take on Yordan Alvarez. And the rest, as they say, is…HOLY FUCKING MOONSHOT.

And that, my friends, is how you make history. Not only were they 2 major sports championship losses in the same day, but both were in horrifically devastating fashion. Both were accomplished with a Philly team blowing a lead pretty late into the game. Find me one other city on the planet that can accomplish with the city of Philadelphia accomplished on November 5, 2022. You can't. You will never be able to. Because when it comes to pain and suffering and total heartbreak, Philly sports reign supreme.

Sidenote: The season ending on Nick Castellanos swinging at the first pitch. How can you not be romantic about baseball?