It was just a week ago that Elon Musk did what any multi-billionaire mogul would do the day he steps into the headquarters of his new business endeavor, which is hold a bathroom fixture in his arms to announce his presence. And needless to say, his new employees at Twitter weren't laughing at his $44 billion dad joke then, and they're not now. Even as the rumors he'd fire 75% of his workforce turned out to be high. The fact that half of them have been let go is small consolation.

Variety - In a major cost-cutting move by new owner Elon Musk, Twitter has notified employees that there will be a wave of layoffs on Friday, Nov. 4 — and that they’ll be notified by email about whether they will continue to have a job at the company.

The companywide email did not indicate how big the cutbacks would be. Musk has been planning to axe about 50% of the staff, or around 3,700 of Twitter’s 7,500 employees, according to a Bloomberg report earlier.

Musk has already indicated that he would make job cuts at Twitter, telling employees at a town-hall meeting this summer that there needs to be “a rationalization of headcount” at the social network. On Oct. 30, asked by someone on Twitter to identify “the one thing that’s most messed-up at Twitter right now,” Musk replied, “There seem to be 10 people ‘managing’ for every one person coding” at Twitter.

And of course, the cultural revelance of that 50% figure has been lost on no one, leading to the most obvious and overshared meme of the week: 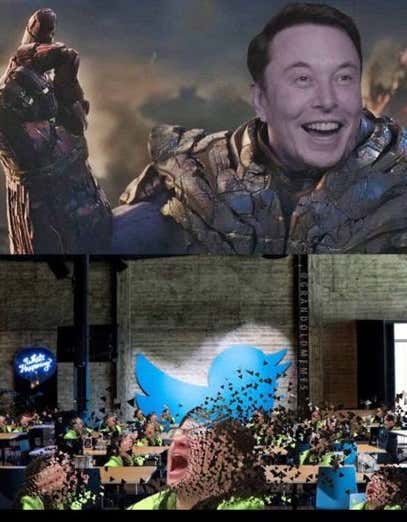 Dread it. Run from it. Elon Musk arrives all the same. Taking over Twitter nearly killed him. But the work is done. It always will be. He is … inevitable.

But the bad news hasn't just stopped at half the work staff being suddenly unemployed. The ones Musk is leaving behind to keep their jobs are going to find themselves being more employed than they were before he took over:

Source -Twitter’s “days of rest” for employee are now a thing of the past under new owner Elon Musk, according to a report Thursday.

Twitter began offering one companywide paid rest day per month, in addition to normal paid time off, during the early days of the COVID-19 pandemic. The policy was meant to help reduce burnout among staffers.

But Musk has eliminated future “days of rest” from Twitter’s calendar this week, sources familiar with the situation told Bloomberg. …

Musk interrupted one of Twitter’s “days of rest” even before he became the company’s owner and CEO. In April, employees reportedly learned that Musk had rejected an offer to take a seat on Twitter’s board of directors just before a scheduled day off — a development that left workers stressed out instead of relaxed.

Talk about being the Mad Titan. Even Thanos wouldn't do this to that half the universe he spared in The Snap. Misguided as he was, that big purple goon was acting out of his own twisted sense of altruism. He was trying to put all living things back in balance. Taking away people's monthly "day of rest" is just wanton cruelty. By eliminating those 12 paid days off a year, he's asking them to make do with their weekend, vacations, personal days, sick days and federal holidays, like the heartless monster he is. Plus he's canceling all working-from-home, except in certain circumstances. Meaning his remaining staff will have to keep reporting to this Dickensian workhouse:

Imagine having to come in on what was supposed to be your "day of rest" to this hellhole? Suffering through iced macchiatos, meditation rooms, yoga rooms, Foosball, shrimp, wine on tap and rooftop Cornhole? Where is OSHA when you need them? This is one of those situations where the living envy the dead.

Anyway, if the federal agencies that are empowered to protect the rights and safety of workers aren't willing to intervene on behalf of Twitter employees, they will hire lawyers to do it for them:

Source - Twitter staffers read the tea leaves and filed a class action lawsuit late Thursday, asking a judge to declare any firings now would be in violation of California and federal law, in part because there was insufficient notice.

Reports are saying the lawsuit is arguing that employees are supposed to be notified 60 days in advance before you can let them go. I won't pretend to have a grasp on the labor laws of either California or the US. I do wonder how you can require companies to keep people on the job for two full months after you've told them they're fired. I mean, what good can come out of a situation like that? Not only would you not get an hour's worth of work out of a fired employee, there wouldn't be a file left un-sabotaged, an office supply left unstolen, or a boss' desk left un-defiled by said worker's foul bodily fluids. So good luck with the lawsuit. But it seems to me when you pay $44 billion for a company, you get some say in who you want to have working for you.

I say again, I'm sorry anytime someone loses their job over something that is beyond their control. Though to be honest, the people at Twitter have made it hard to root for them. Between their pro-censorship policies, the way they've publicly bitched about their current boss and the general way they've run the place over the past few years, they've actually made people like me who would otherwise be sympathetic to their plight root instead for the Richest Man in the World [tm] over them. And that I can't forgive.

The good news is they'll be getting all the "days of rest" they need. Good luck to them with the lawsuit, though.