The New Orleans Saints have Olympic-level gymnasts in their front office when it comes to sticking the landing and avoiding the red on their annual salary cap sheet. Alas, even those all-world contortionists can't shake off the stench of Michael Thomas' five-year, $100 million contract extension that went into effect in 2020.

Let's just say the return on investment for that lucrative deal hasn't been what New Orleans hoped for. I'm not blaming them for paying up for Thomas, by the way. He was on track to be one of the most prolific wide receivers the NFL has ever seen. Call him "Slant Boy" all you want. You can't argue with the historic pace he was on. Thomas had the most receptions in the first four years of any player's career with 470.

Unfortunately, injuries and the retirement of legendary quarterback Drew Brees conspired to sabotage Thomas' promising prime. He's had only 56 catches in the three years since, and is due to enter his age-30 season in 2023 with a fat-as-fuck $28.6 million cap figure. In the final year of his deal, Thomas is currently on the books for over $27.5 million. Unclear what the two void years can do to help that, or if more added can alleviate some of the burden. What is clear is that Thomas' career is completely derailed at this point.

To say Thomas' last few years were turbulent is an understatement. There was the whole incidetn where he reportedly got into a fight at practice with C.J. Gardner-Johnson, which led to internal discipline from the team that then-coach Sean Payton declined to get more specific about. Then, the whole handling of Thomas' ankle injury that caused him to miss the entire 2021 campaign was something the star receiver publicly called out on social media (h/t On3.com):

Yeah...getting paid assloads of money, and then following that up by punching teammates and talking shit about the organization for the entire Internet to see? Not the best look. Those are only the examples I could find upon quick research. I'm pretty sure there's more.

Michael Thomas seems like kind of a prick, but hey, we see this all the time. Those spiteful, chip-on-the-shoulder athletes who get petty, use slights as fuel and harness that edge to feed their greatness. Seemed that was working for Thomas at least initially when he was a second-round pick out of Ohio State. As unlikeable as he strikes me to be from afar, it's a shame to see someone on such a crazy trajectory get robbed of what should've be the golden years of his football career. You hate to see injuries in any context in football. In Thomas' case, it's an especially disheartening "What if...?" exercise.

Given the price New Orleans paid to trade up and acquire another ex-Buckeyes wideout in Chris Olave during the 2022 draft, I feel like the passing attack is going to build around him moving forward. If you go to OverTheCap.com's calculator for the Saints, you can play around with restructuring deals and cutting certain players to try to get the team under the 2023 cap limit. It's a pretty fun exercise. Check out my initial pass below. 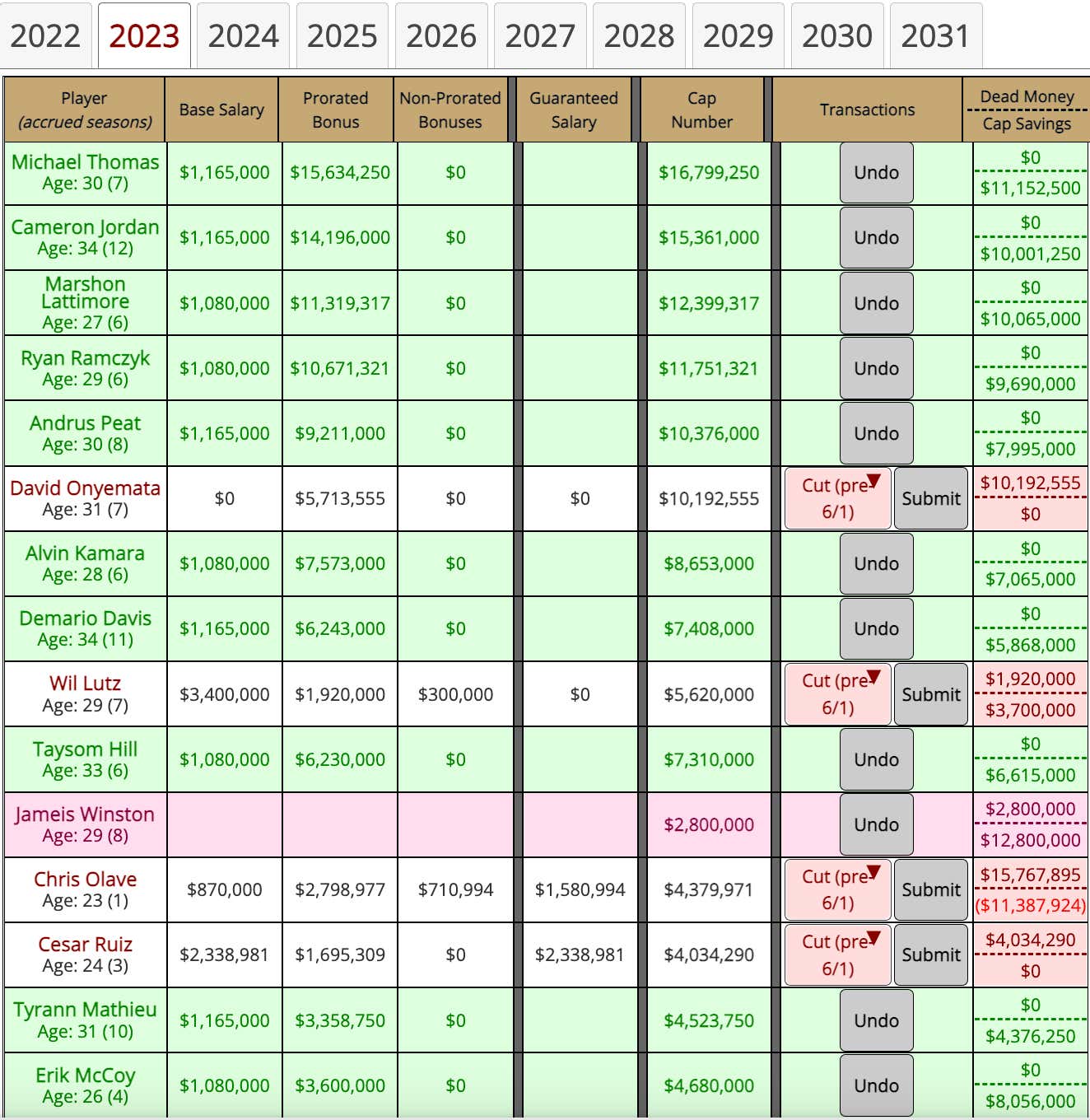 I had to restructure the contracts of TEN current players, and opted to release QB Jameis Winston with a post-June 1 designation to shave off another $12.8 million. That's a pretty dandy job if I may say so myself to free up $38.3 million in 2023 cap room. Kicking the can down the road to that degree only leaves a little over $10 million of space for 2024, though.

Here's another scenario: The Saints could release Thomas with that post-June 1 designation to save $16.45 million in 2023 and $13.87 million the following year — all the while eating a total of over $25 million in dead money. That's really getting off pretty easy all things considered.

Would Saints fans be down to see Thomas try to stick around and play out the rest of his contract? Hard to say, but if I were New Orleans looking at it from a pure business standpoint, I would imagine it'd be time to move off him sooner rather than later.