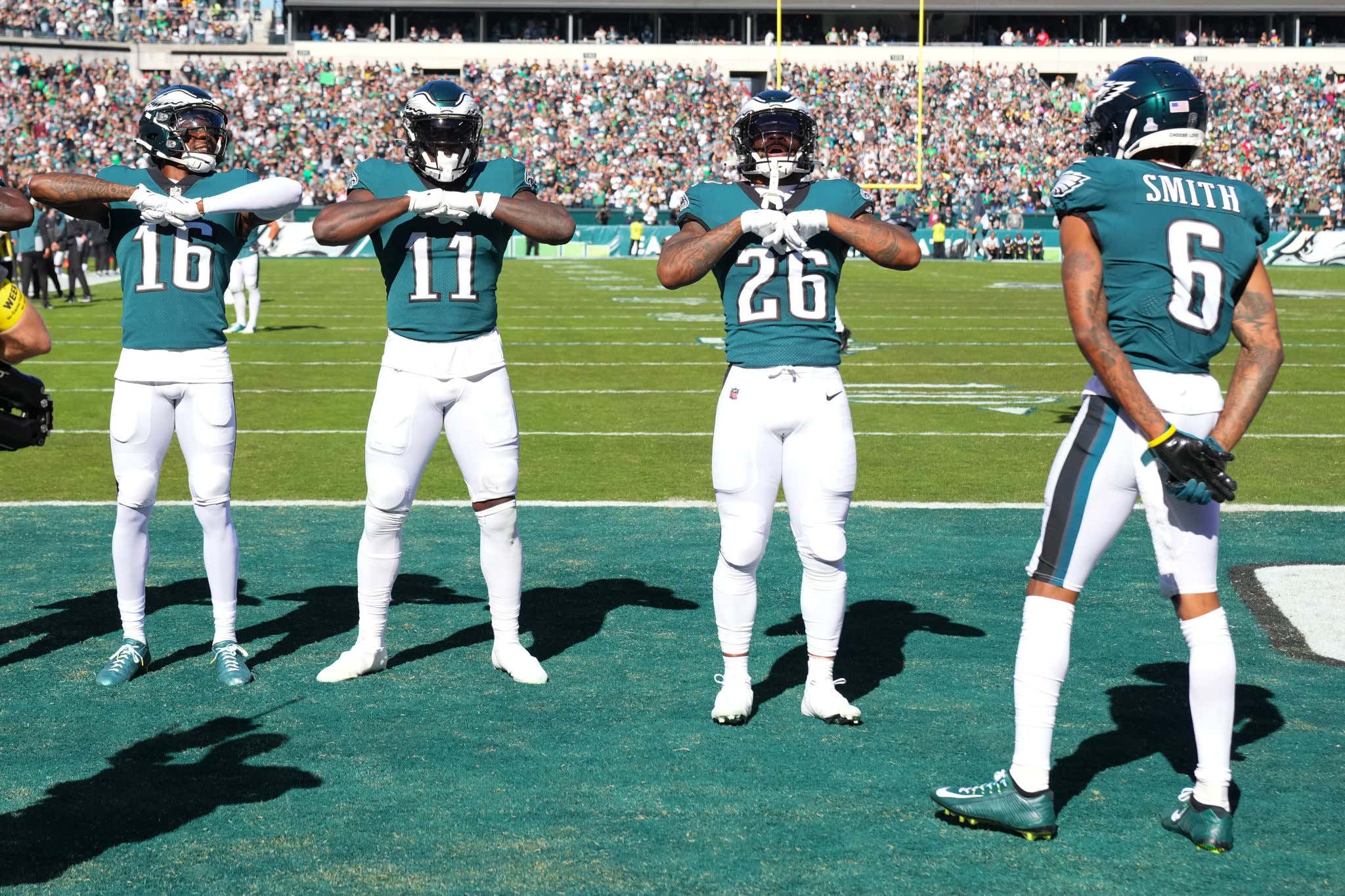 The other day Large started what could possibly turn into my new favorite tradition here at Barstool Sports [dot] com. Marty Mush writes a blog about a subject and then someone who knows more about that subject comes in to make the necessary corrections and rebuttals. So when Marty wrote this blog earlier today…

…as someone who has watched significantly more Eagles football than Marty, I feel pretty qualified to step in and point out what he got wrong.

Now a lot of folks out there will attack Marty for his intelligence. I'm not going to do that. Because 1) I think that's mean, and despite being from Philly, I think I have a pretty soft heart. And 2) I think Marty is actually a lot smarter than he'll let on sometimes. Because strategically speaking, this was actually a brilliant plan by him just starting with the title.

Despite Being 7-0, The Eagles Have a Lot Of Work To Do If They Want To Be On The Bills or Chiefs Level

We've seen this tactic deployed by all the great hot take artists in the modern era like Skip and Cowherd. They know that the Philly fanbase is rabid, and that we don't take kindly to criticism. They know that if they go after one of our teams, they'll have an entire city rushing over to try to go to war with them about it. If you go after an undefeated Eagles team, especially while the city is already on edge about the Phillies in the World Series, you are going to get all of Philly rushing to that blog. They might be hate clicks. They might be rage clicks. But they are clicks nevertheless. And clicks are good for everybody.

But now let's get into the meat and potatoes of the post.

You can only play the teams on your schedule, but it's fair to say they haven't beaten anyone.

From what I gathered, this seems to be the crux of Marty's whole argument. That the Eagles haven't played anybody good. I'm not exactly sure how that's a knock on the Eagles. He even says it himself, that you can only play the teams on your schedule. And it's not like this is college where teams can schedule their own out-of-conference games. The Eagles didn't go out and purposefully construct a weak schedule. This is just the schedule that was presented to them, and there's nothing you can do about that.

But it's not just the fact that the Eagles are beating all these bad teams. It's the fashion in which they are beating them. This team hasn't trailed for a single second in the 2nd half of games yet this year. They've been able to go into cruise control in the 2nd half of every game they've played because of how quickly they dismantle their opponent. They have the best turnover differential in the league at +14 with 16 total takeaways and have thrown just 2 interceptions. The next best turnover differential in the league is +6. So they are crushing teams out of the gates, and then they flat out refuse to turn the ball over to give their opponent any hope of life. It's not just beating bad teams, it is MURDERING them. You can only play who is on your schedule, but how you play against them is totally up to you. And the Eagles have decided to be ass kickers.

We need to see Jalen Hurts actually be tested against a good defense and a team that can keep up on offense…Listen he has played well this year and has an arm I didn't know he had, but he doesn't have a lot of pressure of being down in games or being under any type of crunch time situations. These other teams are getting tested and the Eagles aren't. I believe that will just hurt them in the long run.

But either way, I just don't understand the point here. Are we now holding it against a team for playing so well that they haven't been put in a tough situation yet? Would you prefer the Eagles had played shittier over the last few weeks so maybe they had to really grind out a win instead of just demoralizing a team by halftime? Seems flawed to me.

If you take a look at their schedule there is a legit chance they can go 15-2. They don't play a single good team besides the Giants and Cowboys.

Okay hold up wait a minute. Earlier in the blog Marty tried to say that "the next best team they've beaten was the Cowboys and that was with Cooper Rush as the quarterback". So he's trying to take away from the Eagles dismantling of the Cowboys due to the fact that Cooper Rush was in at quarterback. But how is he going to then say that the Eagles "don't play a single good team besides the Giants" if that same Giants team has already lost to a Cooper Rush led Dallas Cowboys team. How are you going to say the Eagles aren't as good as they appear because they only beat Cooper Rush, but then still have the audacity to say the Giants are a good team? Seems to me like this argument might just be a little based. Who would have thought?

Philly fans will be mad at this

Probably the best point he made the entire blog. You're absolutely correct about that, Marty. Good take. Excited for another blog about why Baker Mayfield is actually the best quarterback in the league.

By the way if you are looking for something tangible that the Eagles actually need to work on before being crowned the best team in the league, then it's special teams. You can't be falling for fake punts every week. You need to get something going on your punt return game. You need any sort of juice that special teams can provide, and the Eagles don't have that right now besides a really good kicker. So that's where I would have started my argument. Not "well they just haven't played anybody good yet".