Just when I thought true love might be dead....

The mood at the Linc was already sky high on Sunday between the Eagles' perfect record, the amazing tailgate weather & added bonus of the Phillies being in the World Series, and this only added to the #ImmaculateVibes in that lot. Huge congrats to the couple!

I love that he was able to fish the ring out of his cargo-sweatpants while finishing his beer at the same time. I love that she dropped an F-bomb almost immediately upon realizing what was happening. I love the way the crowd builds & the cheering grows from an EAGLES chant into screams of joy. I love the way he looks at her... Just so much to love. 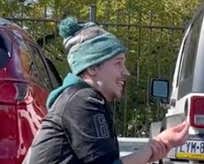 The video has gotten hundreds of supportive comments, and even some from athletes including the namesake of the bride-to-be's jersey, Brandon Graham.

No word on if Graham or DeVonta Smith will be at the wedding but I'd like to think so. If the proposal is any indication, there's no doubt their reception is gonna be a banger.