To see this pop up on my Twitter timeline today was not what I expected. Even more expected, god damn Forbes put the article behind a paywall! You smooth motherfuckers! Finally something people want to read! Ugh, god damn print media and their outdated business models strike again. But here's the most important part these cocksuckers at Forbes don't tell you until you buy it:

According to a person familiar with the process, Snyder already has at least four calls from groups interested in buying the team. Snyder and his bankers are exploring all options and a transaction could be for the entire NFL team or a minority stake.

The good news is this could be for the full thing. The bad news is it could be for just a minority stake in the team. And why? Maybe so he can build his own stadium since MD/VA/DC have all told him to fuck off.

But optimistically, maybe this is the time. Maybe the heat has gotten too hot. The flames have grown and are about to burn the whole thing down.

WOAH BREAKING NEWS WHILE I WRITE THIS BLOG!!! THE SNYDERS RELEASED A STATEMENT! 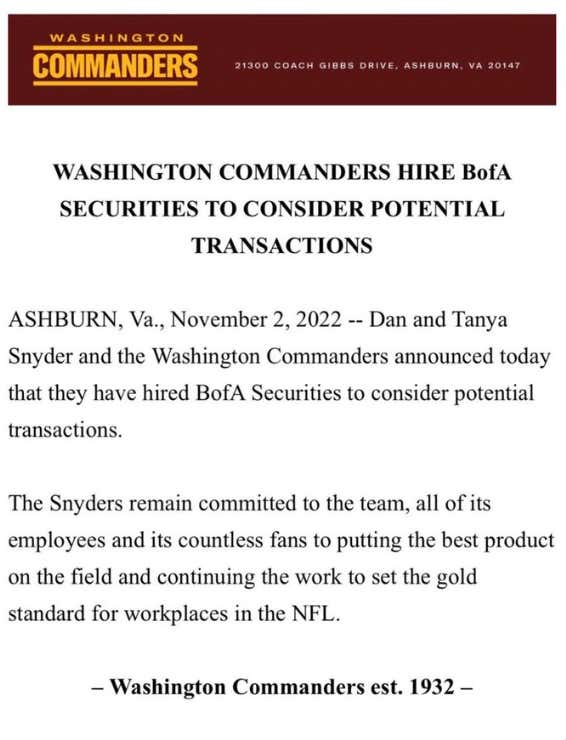 That….says A LOT. Like…I know how Dan Snyder thinks. He does not release that statement unless some shit is going down. I'm not getting ahead of myself. He's burned me many times. But that seems like the real deal. That, to me, makes me think he's selling the team. That's my gut reaction to them putting out their own statement. I could obviously be wrong. But holy shit.