The Houston Astros had to love what they were seeing throughout the National League playoffs. As the Phillies were running through the best the NL had to offer, the Astros were quickly realizing they'd have a 3-day trip to Philly on the horizon. I've said it once, I've said it twice, I'll say it a thousand more times. Philadelphia is the most underrated food city in the country. And I'd imagine there are a few folks within the Houston organization who know that. So I'm sure they were pumped with how good they'd be eating in Philly.

Or so they thought.

The moment the Astros touched down in Philly they reached out to Angelo's Pizzeria, home of some of the best pizza you'll find in the country, the best cheesesteaks you'll find on the planet, and a bunch of other kickass sandwiches on the menu. Can't blame the 'Stros one bit for wanting to fuel the boys with some Angelo's. The only issue, however....

Now here's the thing. Did Angelo's turn down the Astros order because they legitimately didn't want to feed the enemy? No. Of course not. They are too hospitable for that. It's just that the joint is run by a bunch of rabid, die-hard Philly sports fans and they didn't want to spend the entire game cooking instead of actually watching game 3.

But either way, this is the World Series. Houston is finding out the hard way they are in the middle of the jungle. It takes everybody. The 26 players on the field. The 45,000 fans in Citizens Bank Park. And all the incredible fans around the city like Danny and the gang at Angelo's to make the Houston Astros realize they are in a fight for their life here. They thought they'd come in here and get treated like royalty while on their way to sweeping the series. They're sorely mistaken.

Oh and if you thought this was another classic case of Philly scumbaggery, then I'd love to know what immediately jumping to bomb threats would be considered for Houston fans.

Now obviously they could just be talking about the Phillies getting "bombed" via home runs. But that wouldn't make sense either considering the Astros had checks notes 0 homers last night while the Phillies put up, let me break out my calculator real quick, 5 of those suckers. So either Astros fans were talking legitimate bomb threats or they're a bunch of wildly overconfident nincompoops. I'm not sure which one I'd prefer.

Okay then, so the Astros struck out at Angelo's like they did 4 times last night against Ranger. No big deal. They can just get something that makes them feel more at home. Houston is home to some great barbecue, so whey not try out one of the best bbq joints that Philly has to offer? Time to head a mile down 9th street and try out Mike's BBQ. 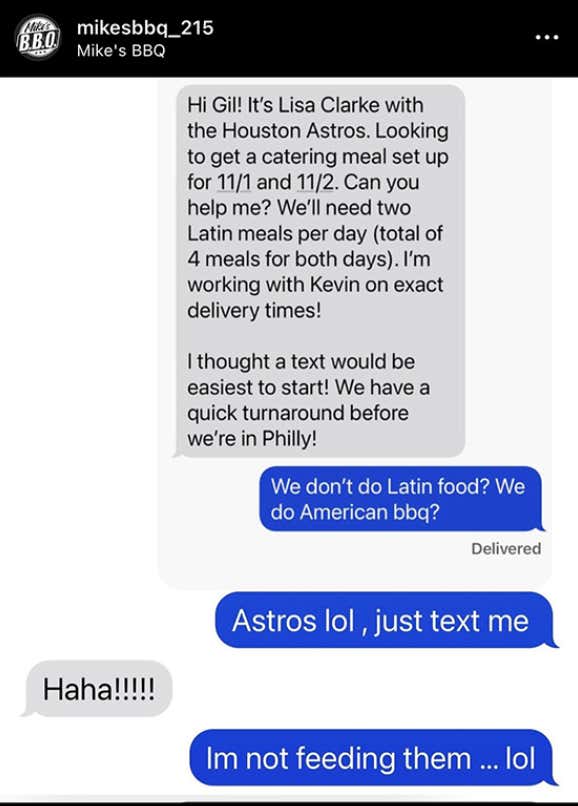 Now this one seemed to be more of a case of mistaken identity than anything. The Astros might have just gotten the wrong number here looking for Latin food instead of BBQ. But as Brian Williams once said, "don't let the facts get in the way of a good story". And the city of Philadelphia rallying together to make sure the Astros have to just get the nearest McDonald's to their hotel while they're in town for the World Series is as great of a story as they come.

Sidenote: I'd just like to mention here that both of those establishments are ran by two of the greatest people you'll ever meet. They do a ton of amazing work for charities and they do a ton of great work for their communities. You won't find many people that are more pure than Mike of Mike's BBQ and Danny at Angelo's. "Refusing" to cater for the Astros when neither of them literally have the time to fill out those orders is just a funny little wrinkle to this series. Nothing more, nothing less.