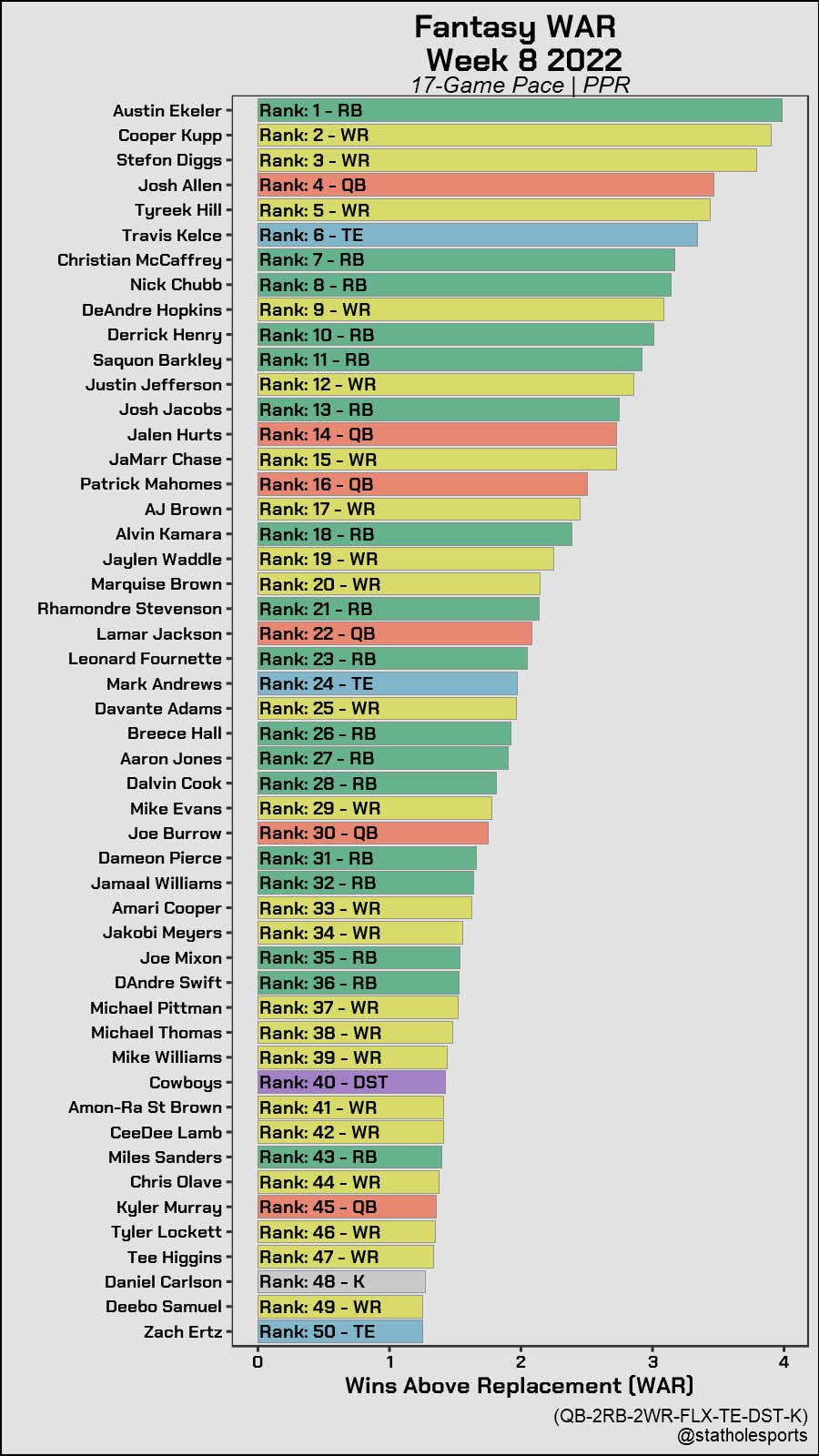 It's been a few weeks since I blogged about fantasy football WAR so figured I'd check in real quick with a few midseason notes. If you're unfamiliar with what the hell this graph above even is, you can check it out in my article here, but basically the WAR for each player is how many fantasy matchup wins your team is expected to win above that of a replacement-level player at that position as defined in the article. Quick example: DeAndre Hopkins is the 4th best wide receiver right now because the model presumes his owners started a replacement-level wide receiver while under suspension before loading him up the past two weeks.

First and foremost: "RUNNING BACKS ARE BACK!". I'm a big "hammer top running backs" guy and it wasn't looking good early in the season as top ADP wide receivers were flat dominating while the thoroughbred running backs struggled out of the gate. Now these workhorses are out and kicking dirt behind them as they sprint around the track leaving only Jonathan Taylor left in the stable trying to run through the back wall like he's Jim Halpert playing Call of Duty.

CMC - I think there's a good chance he ends up being the overall #1 player in fantasy when all is said and done. Many people thought he should have been the overall #1 but even that wasn't with the thought that he'd be traded to the absolute best possible team for a fantasy running back. Long are the days of Kyle Shanahan making managers sick trying to figure out who to start in that backfield.

Josh Allen - My other big hot fantasy take coming into this season was that I thought Josh Allen was "worth" a first round draft pick. The quotations over worth means that I'm not saying you should have drafted him then - just that he's worth so much more than fantasy experts give him credit for because the industry is behind on replacement-level value at quarterback. Josh Allen actually dropped from the #1 overall player last week to #4 this week but is still #1 overall in non-PPR ahead of Nick Chubb (#2) and Derrick Henry (#3).

Jalen Hurts - Speaking of quarterbacks, Jalen continues to show he can do it all. I remember writing about best ADP values prior to the season and Hurts was one of the very top on this list. And the only other analysts that saw this ascension coming were me and... well, literally everyone else in the world.

Justin Fields - Ranked 145 in WAR, Fields is not going to make his way up the charts due to the Bears playing a 1940's style offense for a hefty portion of the year but I think he might be the next Jalen Hurts from a fantasy perspective. The designed runs, roll outs, and acquisition of Chase Claypool combined with the Bears trading two of their best defensive players left tells me Fields might be a guy that wins a lot of leagues.

Troll of the Year Resumes

Troll of the year is an award I made up that is given to the player that screws their managers by playing like shit when a lot of managers play them, and then going off when managers bench them. May as well call it the Will Fuller award because he's the guy that led me to thinking of this in the first place. Here's a couple resumes from the front running candidates.

Gabe had a good first week luring managers in on the talent before dudding in weeks 2-3. His start percentage in ESPN leagues dropped 10 percent before he went bonkers in Week 5 vs the Steelers. The big blemish on his resume came in Week 6 when his start percentage almost doubled and he was able to produce on a two-minute drive before the half vs the Chiefs. Had he been able to come through and not catch that touchdown pass this competition would have been over.

Instead the Troll of the Year door has been left open for...

Boyd's start percentage rose from 2 percent to 5 percent after a good Week 1 only to have him score 5 PPR points in Week 2. That led his start percentage to drop in half for Week 4 when he put up 20 PPR points. In Week 5 his start percentage doubled to 6 percent and he flopped once again. Boyd has been a chaotic wild card from the start of the season and that's why only 12 percent of teams started him when he went off in Week 7 with 29 PPR points on millions of ESPN league benches. Similar to Gabe Davis, the only blemish for Boyd was the garbage time touchdown in Week 8 he caught on a tipped ball in a game he was started in 44 percent of leagues. For perspective, his second most started week was Week 7 which as we just covered was still only at 12 percent.

Even with that garbage time touchdown, Boyd still only scored 13 points so as it stands now I think he's the clear leader of the TOY pack.

Here's the rest of the top-100 players by WAR so us Jonathan Taylor owners can count how many kickers would have been a better option at this point with the overall 1.1. 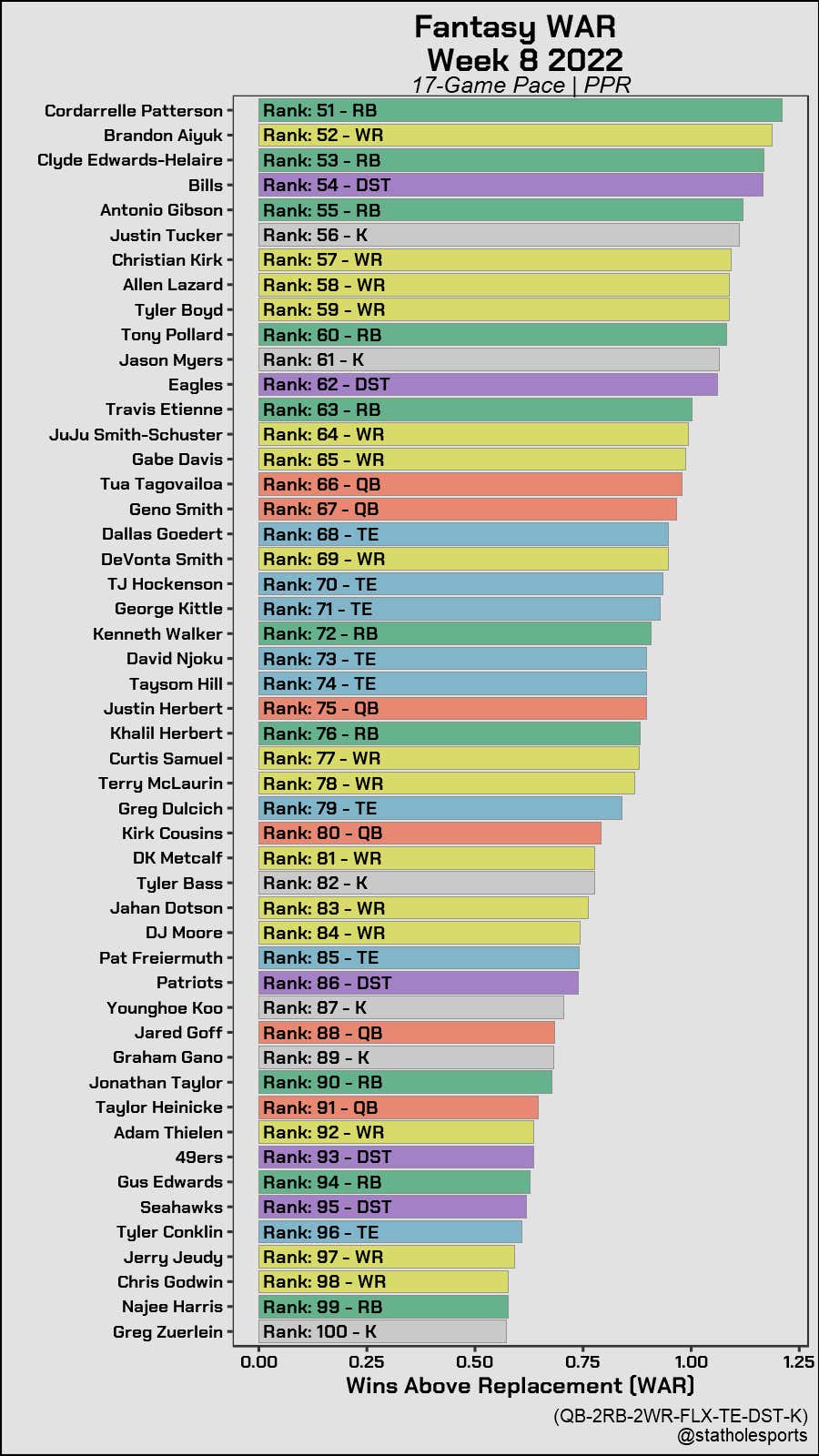