It was a different draft this week with the guys remote and White Sox Dave and Chief out, so the boys had Robbie Fox and Kenjac, who actually does the graphic below for the Dog Walk drafts on the show in addition to their guest this week, an expert in the subject, film critic Richard Roeper. 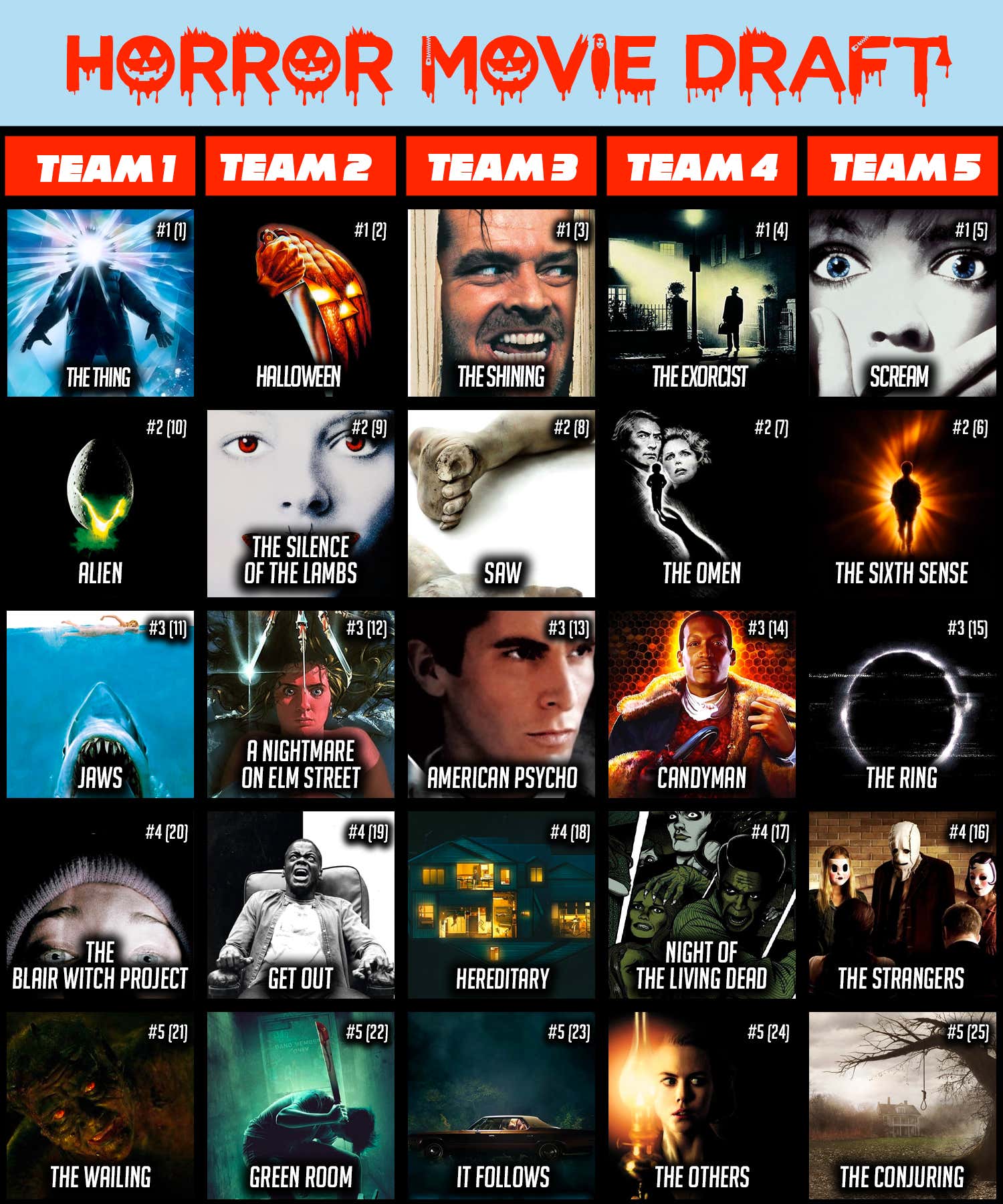 I'm going to be honest, I was surprised with The Thing as a 1.1. Definitely a scary movie and like the guys said, the perfect quarantine watch, but #1 overall seemed a bit rich to me. Alien and Jaws are classics and great picks at the 2/3 turn. Both classics that will live forever. The Blair Witch Project is an interesting one. It feels modern, but is older. I do like the explanation of using the mind to create horror, so I have a better grade on it than initial thought. I have not seen The Wailing, but based on Round 5, that's a free pass.

Halloween is an EXCELLENT pick at #2 overall. Should've been #1 in my opinion. This drafter also did an outstanding job pointing out that the movie basically spawned a very universes. Silence of the Lambs is a great 2nd Rounder and was a 1st in my book. Nightmare on Elm Street is also a classic, but I love the modern pick of Get Out, which is very good value in Round 4. I haven't seen Green Room, but another Round 5 selection to a star studded draft.

The Shining is an excellent pick 3rd overall. Chalky, but you gotta take what the board gives you. Saw in Round 2 was a bit rich for me, but I do like the idea of a somewhat recent flick. American Psycho is one of the most overrated movies I've ever seen. The hype is insane for a very blah movie in my opinion. Hereditary is super recent but also a great pick in the 4th. I'm surprised this drafter didn't realize there was such a big cult following for It Follows which is my favorite 5th Rounder. Very well balanced draft!

The Exorcist is a solid 1st Rounder at 4th overall and the hype around that was massive for almost all ages. It was the first really restricted movie I feel. My issue with this drafter, was they got far too niche. I don't think The Omen or Candyman appealed to a wide enough audience and despite a great knowledge of the subject, they didn't make the final poll.

As a 36-year old, Scream was the horror movie when I was a kid, but even I feel like 5th overall is a bit high. I would agree that The 6th Sense falls into the horror/thriller genre and this was M. Night Shyamalan's breakout movie. The Ring was a freaky movie that you got paranoid someone would crawl through the TV and get you. Strangers and The Conjouring round out a very balanced draft from this experienced drafter.

Who do you think won the Dog Walk Draft? Vote here.

And catch the full Dog Walk episode here and be sure to subscribe to the Barstool Chicago YouTube channel.