"Oh, yeah, I had the cane and everything!'' Jones told us following the game. "And I used it on some people, too!''

As Halloween costumes go, Blind Referee scores pretty much down toward the bottom of the Originality Scale alongside such lazy perennials as Vampire, Proctologist Dr. Seymour Butts , and the guy in his street clothes who just puts on a rubber mask and takes it off the second he opens a beer. As a matter of fact, Blind Referee isn't even the most popular Referee. That honor of course goes to Sexy Referee, year after year. 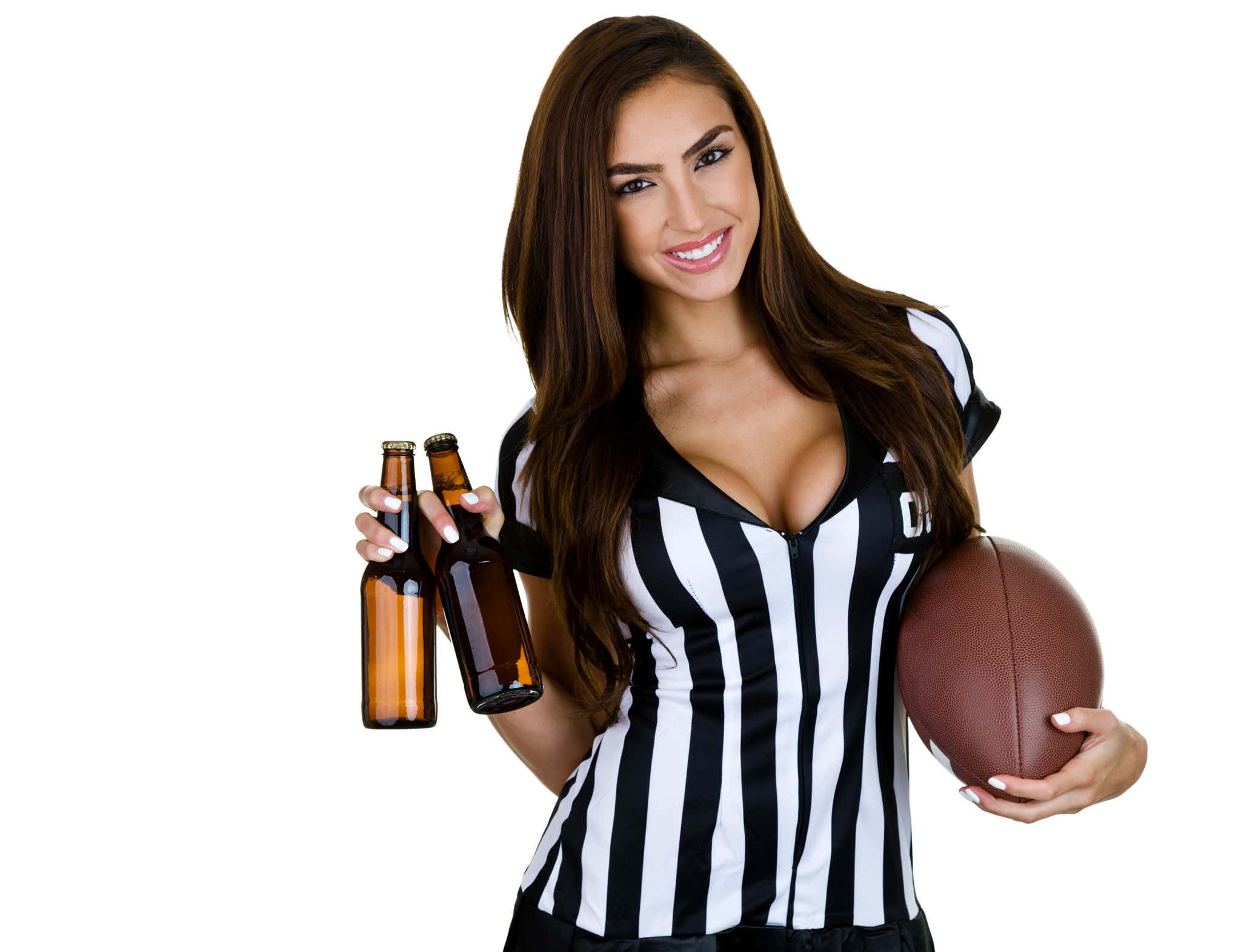 The stripes are a key selling point.

Still, kudos to Jerry Jones for taking this tired old trope and putting his own spin on it. It's one thing for your non-creative buddy to show up at your party dressed like that. For him, it sends the message, "I spent 20 bucks on the shirt at Spirit Halloween and 20 seconds thinking about my costume." For Jerruh, it sends the message, "Our officials blow ass and I'm way too powerful for anyone in the league to do a damned thing about me saying so." Which is not entirely true, apparently:

Source - While Jones and other people on social media may have found it amusing, the NFL might not find it so funny.

The league sent a memo to coaches, general managers, team presidents and chiefs executive in October 2019 stating that it prohibits the following types of criticism towards officials (via ProFootballTalk):

Jones’ costume could certainly fall under the last criteria there … but Jones’ son hopes the league shows a sense of humor.

“They have a very difficult job in real time,” Stephen Jones told “The K&C Masterpiece” on Monday. “I do think they understand you can have some humor with this stuff, but I can’t imagine they don’t think there’s nothing but respect that comes out of the Cowboys organization in terms of how difficult their job is and what a good job they do, as well.”

First of all, Stephen Jones can get all the way off his old man's dick with that apology. If the Cowboys' defensive backs could backpedal like that, they wouldn't be a game and a half back in the NFC East. Second, Jerry didn't to where he is by apologizing for anything. Not even the fact he's almost 30 years removed from his last Super Bowl and refuses to hire a GM. This is a man who told the most universally respect owner in the league not to fuck with him:

… do you really think he cares if the NFL believes he crossed a line at a Halloween party? Hell, he's even facing down reports of a sexual harassment lawsuit. But that didn't stop him from letting SI know he "used" his cane on everyone at the party, and let us use our imaginations on what that means.

Nope, he's got a lot more than his son's apology. He's got Fuck You money and the Fuck You power that it brings. What are they going to do, fine him $100,000 for the joke? He'll throw another sign up at that monument to wretched excess the taxpayers of Texas built for him and make that back in a weekend. Maybe the officials will squeeze the Cowboys a little bit as revenge? Maybe give them a bad spot of the ball here and there and mix in a ticky-tack Pass Interference call? That will only prove his point. And there's nothing an 80-year-old billionaire lizard person like him enjoys more than being right. About absolutely anything. Whatever this winds up costing Jerry, it'll be the best money he's spent in days.