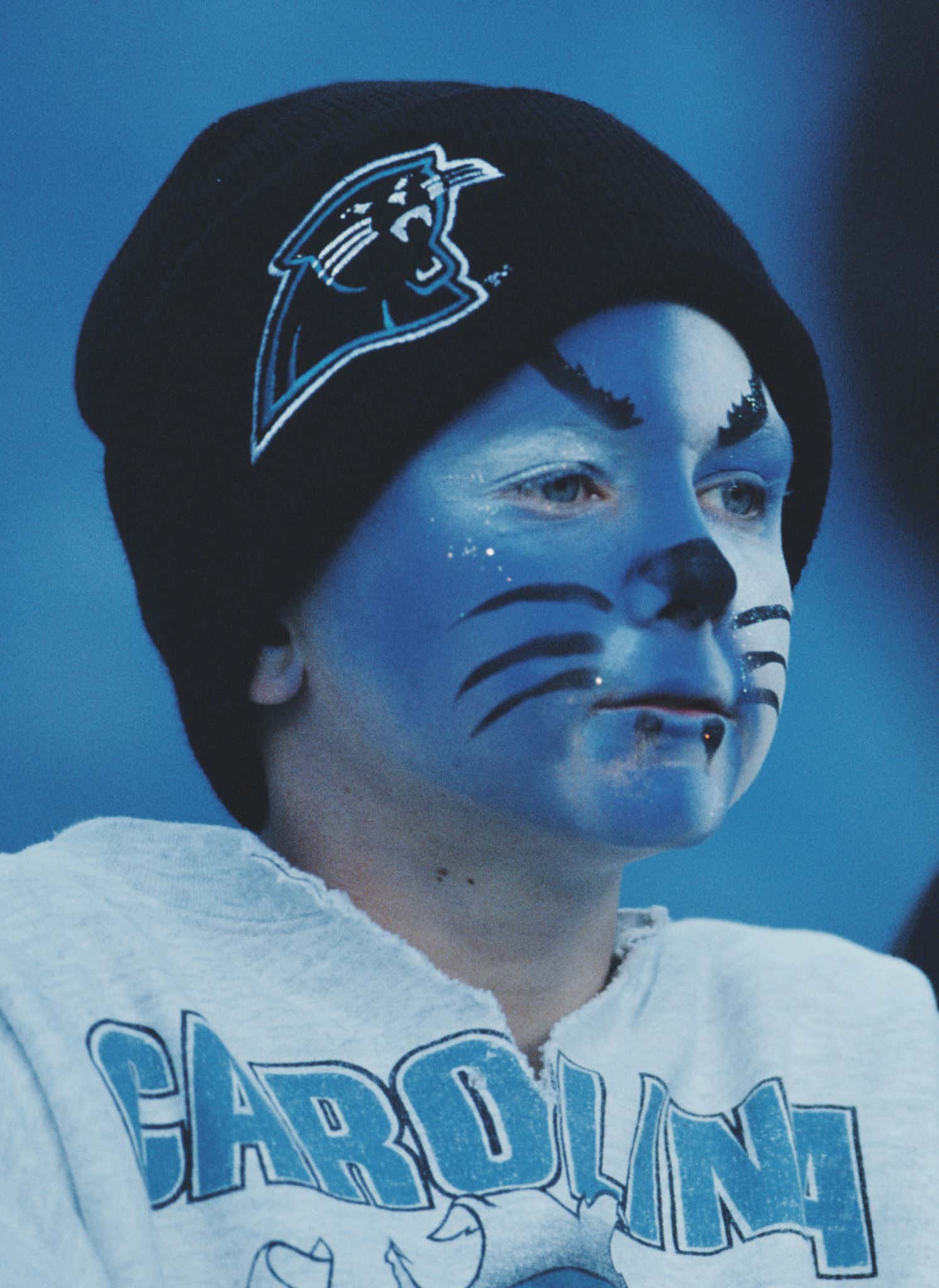 Welcome back to another edition of sad stats from the NFL weekend - not just the NFC South. Every week is something new and hopefully you discover a useless statistic or two you have yet to hear about. For all my Broncos fans out there checking in this week - it's good to see you back for a rare week off from avoiding this blog like the plague. Finally, you can high knee your way through this entire article without being subjected to any additional reminders of your pain and misery for at least this week. Panther fans? Maybe do with this article what your team does best and swipe it left.

Sad Stat #1: Kyle Shanahan continues to own Sean McVay but that's where things get weird

Kyle Shanahan improved to 9-4 vs Sean McVay and did so by flaunting his new toy Christian McCaffrey by having McCaffrey pass, catch, and rush for a touchdown in the same game. The last player to complete this triple crown was LaDainian Tomlinson in 2005. Brutal way for McVay to continue being owned by Shanahan by having to toy he wanted showcased right in his face.

But after doing a little digging it appears the NFC West is just a big circle jerk of coaches owning each other. While Shanahan has gotten the better of McVay, Shanahan himself has been even more owned by Pete Carroll with a paltry 3-8-1 record. We're not done though as Pete Carroll is just 3-8-2 vs Sean McVay to complete the circle jerk of NFC West coach ownage. But if all three of these coaches own another coach while getting owned themselves, what's the sad stat here - doesn't this just even out? The sad part is the coach who wasn't invited to the circle jerk - Kliff Kingsbury. Poor Kliff doesn't have a winning record against any fellow NFC West coach and is 1-7-1 vs McVay leaving Kliff as the whipping boy of the NFC West.

If you know anything about football analytics, you know that quarterback efficiency is all the rage. For instance, Joe Burrow threw almost 500 yards in Week 7 and the Bengals won the game. Was this efficient? Not when you compare this to the only 55 yards Malik Willis needed to throw to win his first start ever in Week 8. And just so we're clear - Willis was the only player to throw a pass for the Titans so he didn't get any help. To celebrate this analytics achievement, I went to the history books to find some other quarterback efficiency legends that led their team to victories with the fewest passing yards while also being the only player on his team to complete a pass for that game.

23 yards is all Derek needed in this masterclass of efficiency (2/17 passing with 0 TDs and 1 INT) leading the Browns to a decisive doubling of the Buffalo Bills with a final score of 6-3. Unrelated: Putting a pin in this game if I ever do a saddest game ever blog.

Imagine a team throwing only seven passes in an NFL game and winning. Pretty hard to imagine, right? Now, imagine that team's quarterback was Carolina Panther legend, Chris Weinke. For anyone too young to know who this god of utter sadness was all you really need to know is he passed for 11 net yards after deducting 21 yards lost on sacks and still won this game which provided half of his total career wins (2-18 career record).

What if I told you, that you - YES YOU - passed for more net yards in a game than a game winning NFL quarterback? You'd answer right away: "Oh that must mean it was David Carr". Indeed the all-time GOAT of getting sacked to all hell, David Carr threw for 32 yards and was sacked for 37 producing a grand total of -5 passing yards which was good enough to beat the Raiders by almost double-digits (23-14). This performance was so colossally bad and the fact that he still won is so colossally random that no quarterback could ever dream of duplicating this masterclass in efficiency.

With 33 passing yards and only 23 yards lost on sacks, Carr's 10 net passing yards four years earlier than his 2006 efficiency masterpiece showed that while he definitely had potential, his game still needed a little polish. I've actually written about this game before because it was one of the most ridiculous football games you could ever imagine. I'm still not even sure it was real. These 10 net passing yards combined with the 37 total rushing yards for the Texans somehow led them to scoring 24 points and winning by 18. That's about a half a point per offensive yard gained. I'd say that's pretty efficient. I take back the "needed polish" comment. This was another David Carr masterpiece.

The Bengals dominated the Broncos in this game as they combined for 441 yards with only 407 coming on the ground and all the other 34 yards from the rocket arm of Akili Smith. Anyone that's been in a group project with the eager kids willing to do all the work knows the position Akili was in here. Props to him.

Sad Stat #3: All three shutouts this year were won by teams with losing records

When I noticed the Raiders were getting shutout by a mid ass team in the Saints I stupidly wondered when the last time a team with a losing record goose egged another team. Turns out I had to go back all of three weeks when the Patriots beat the Lions. And the only other shutout of the season so far was in Week 2 when the 0-1 Jaguars demolished the Indianapolis Colts and their Weekend at Bernie's style offense.

Sad Stat #4: Like a magician, Eddie Pineiro made everyone instantly forget how stupid D.J. Moore is 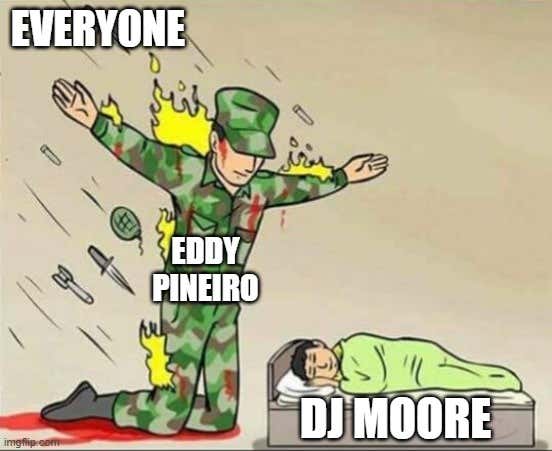 There's no doubt Eddy was about as useful as Cousin Eddie from Christmas Vacation in Week 8, but neither of his two misses happen if D.J. Moore doesn't take his helmet off in the endzone. What a moron. You have to know the rule here. Not only did Moore cost the Panthers 15 yards, not only did Moore cost the Panthers the game, but he cost the Panthers from taking first place in the division and put them in last place. That's a sad penalty. The only thing stupider than D.J. Moore's blunder is that this is even a penalty in the first place. Seriously NFL, the play's over, who the fuck cares if someone takes their damn head gear off? What is this, Iran?

Wait who was I giving shit to again? Eddy Pineiro! That's right. I looked up historical field goal percentages at the distances he missed the PAT and 32-yard field goal and if we presume Eddy is a league average kicker there was a 1.6% chance of him missing both kicks. That's probably a bold presumption though given that he was passed over by the Chicago Bears, but no NFL organization who's objective is to win football games can possibly keep such a liability on their roster moving forward.

Can't end without mentioning that the Chicago Bears gave up touchdowns on the first four Cowboy drives Sunday. The Bengals were the only other team this year to score touchdowns on their first four drives just a week ago vs the Falcons. Anyway, turns out Robert Quinn was pretty good I guess. The Bears addressed this issue after the game by going ahead and trading another star defender, Roquan Smith, so that should patch things up going forward.