The only thing scarier than watching the Cleveland Browns on national television is having to watch them every single week represent your city. Tonight the entire country will be subjected to our personal house of horrors as the Browns try and snap a 4-game losing streak against The Bengals.

The Browns should be around .500 and looking towards a late season run at the playoffs once Deshuan Watson returns. Instead they are 2-5 with a top tier offense and an overpaid, laughing stock of a defense.

If you would have told me before the season that Jacoby Brissett would be a top 12 QB and Nick Chubb was leading the NFL in rushing through seven games, I would have bet anything that the Browns were in the mix for the division.

The hype around this Monday Night Football game would have been insane and my liver would have been shaking and cowering in the corner knowing the abuse it was about to take this evening. Instead I am seriously considering handing out Halloween candy at my house instead of tailgating.

That’s what happens when you have a team with no heart that gives up double-digit leads like it’s their job. The Browns are the weird guy on the block who builds a half-assed haunted house in his garage for trick-or-treaters but none of the parents will let their kids go near it because they all know what a fucking weirdo loser he is. All show, no go.

There really isn’t a single redeeming quality in the 2022 Cleveland Browns except maybe that they don’t get blown out much? Which honestly makes this season even worse.

None of that matters once kickoff rolls around though. I’ll be back on that train like the addict I am. I can’t shake this team no matter how much they disappoint me and destroy my life. I’m only a couple weeks away from my friends and family cornering me in private and reading statements that begin with, “Your Browns fandom has negatively affected me the following ways…”

If I’m going to watch this mess anyway then I might as well make some money. Responsibly, of course. Here are some of the plays from the Barstool Sportsbook that I like for Monday Night Football.

The Browns defense is straight booty and the Bengals have had a hard time stopping the run since losing DJ Reader to injury.

The Browns come in with the third most rushing yards in the league. Those factors combined with a beautiful 60 degree evening down on the lake front means points galore. I like this one to hit the over easily.

No Ja’Maar Chase means more targets for Boyd. No Denzel Ward means no one to take away one side of the field. Greedy Williams and Greg Newsome being questionable means an absolute fucking nightmare scenario for the Browns secondary.

I love the #1 receiving DVOA player in the NFL to feast tonight.

With David Njoku out Harrison Bryant will be stepping into the starting TE role. Pharoah Brown is questionable which mean there is basically no one to steal targets from him.

If the Browns have as many red zone trips as I think they will tonight Bryant will get at least one target in the end zone. There is some great value there.

This one is a little crazier but hear me out. Kareem Hunt is on the trade block and tomorrow is the trade deadline. If there is even a chance he might get moved I could see the Browns limiting his reps during this game. No need to risk injury for someone you might be moving for a mid-round pick.

That would mean more reps for Johnson who is hungry to once again prove himself. If that’s the case he will definitely get some reps in third down red zone situations. At +850 it’s worth a flyer.

Just writing this blog pisses me off because I can already see how tonight is going to pan out. The Browns are going to look fantastic, pull out a win when they have no business doing so, and then we are all going to get dragged along for 13 days through the bye week with a slight glimmer of hope.

This is Browns football. This is the hell we cannot escape. We should be put out of our misery but instead we’re all going to buy back in.

And unlike last year where Myles Garrett embarrassingly wore his cape after a loss, this time he will wear it proudly. It is fantastic cape weather after all. 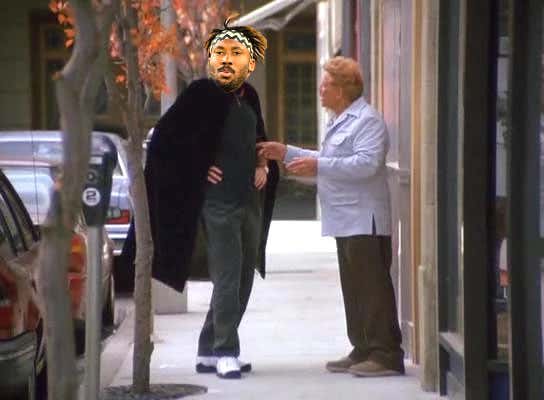