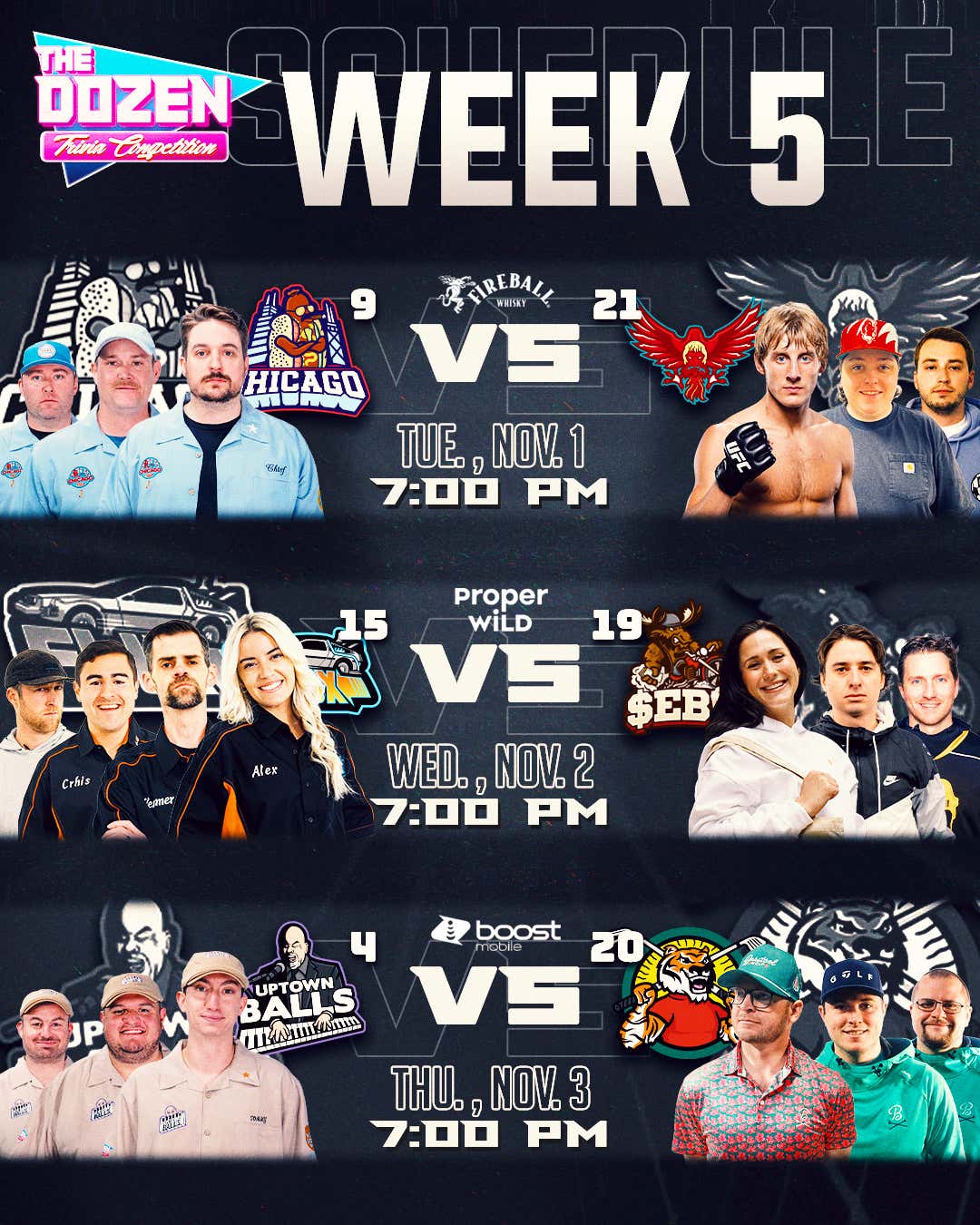 We are almost through the debuts of all 24 teams for The Dozen: Trivia Competition Season 3! After this week, only Spittin Chiclets will have yet to play. This week Foreplay debuts, the defending champs play, and Paddy the Baddy steps into the ring for the first time. Our correspondent Scoops L'Aguirre has the breakdown… 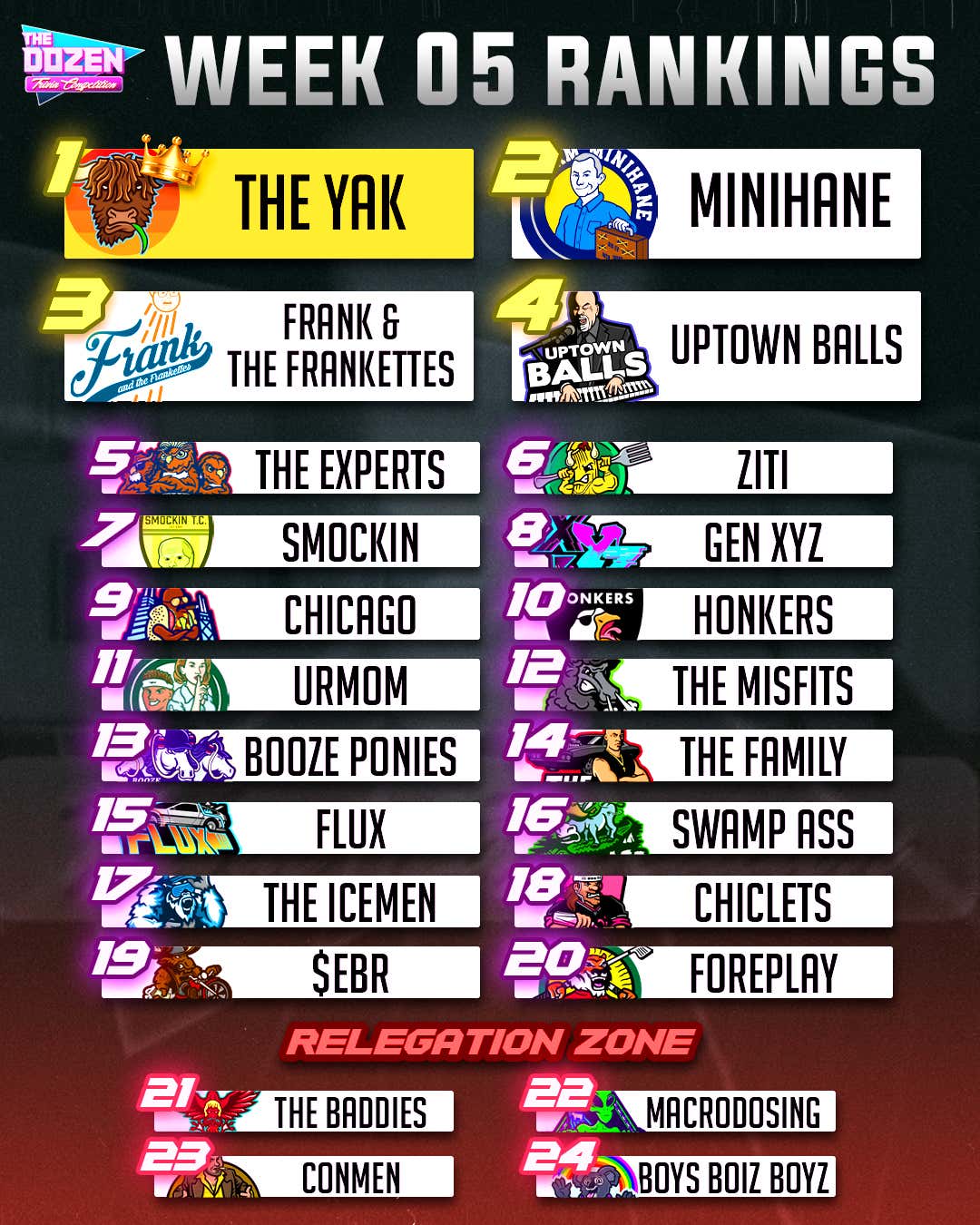 - Not a ton of movements. The Frankettes and Smockin are good teams moving up one spot each following (4 to 3 and 8 to 7) after wins, while Uptown Balls and XYZ drop one each.

- Despite the Conmen giving the Frankettes a decent run for their money, they only rise to 23rd. Meanwhile, The Misfits actually went up a spot after their loss to Smockin.

- The biggest jump is Swamp Ass going from 23rd to 16th following a blowout win against Boys Bois Boyz, who now drop to 24th.

- Expect a big shakeup following next week's Big Apple Brawl live event in New York City, with 6 teams in the Top 10 all playing. You can still buy tickets here:

Paddy the Baddy wanting his own Dozen team once joining Barstool is one of the great unexpected twists. He will be teaming up with TJ & Blaise, where the hope is they can carry the load when it comes to US-centric Sports and culture, while Paddy dominates in his categories: Soccer, UFC, Food, etc.

They are going up against Team Chicago, who will be looking to silence the cheating allegations from their previous match. Good thing for the Baddies where even if WSD wanted to cheat in the UFC round, he probably wouldn’t be able to pronounce Aljamain Sterling or Deiveson Figueiredo when directly reading their names off google.

Foreplay is the new Team Ziti. They have three nice guys who genuinely love the show and enjoy being on, yet none of them have ever won a game. It is going to be an uphill battle facing reigning Champ Uptown Balls. At least Frankie will have Francis on stand-by for a Phone-A-Friend.

Everybody Rides is a new expansion team featuring former NHL player Matt Murley, Spittin Chiclets Mike Grinnell, and Mean Girl Pod’s Jordyn Woodruff. Murls is a heavy better, and as we saw with Elio, all those bets lead to certain names retaining in the head for trivia questions. Jordyn specifically works in Pop Culture, where she should be good in the Mashup and TV category; however, any time a woman plays on the show, they instantly get compared to Fran, which is a difficult standard to meet.

It will be a brutal debut for Everybody Rides going against Chris Castellani. Since his debut, Castellani has been a primetime player who typically only faces the elite teams in the league. When Chris played Foreplay last season, he set an individual record for both points and steals in a game. Watch out for Chris to potentially drop double-digit points solo against EBR. It is worth noting that they are coming off of a horrible performance to start their season a few weeks ago when they got clubbed by Team Minihane.

PLAYERS OF THE WEEK FROM WEEK 4 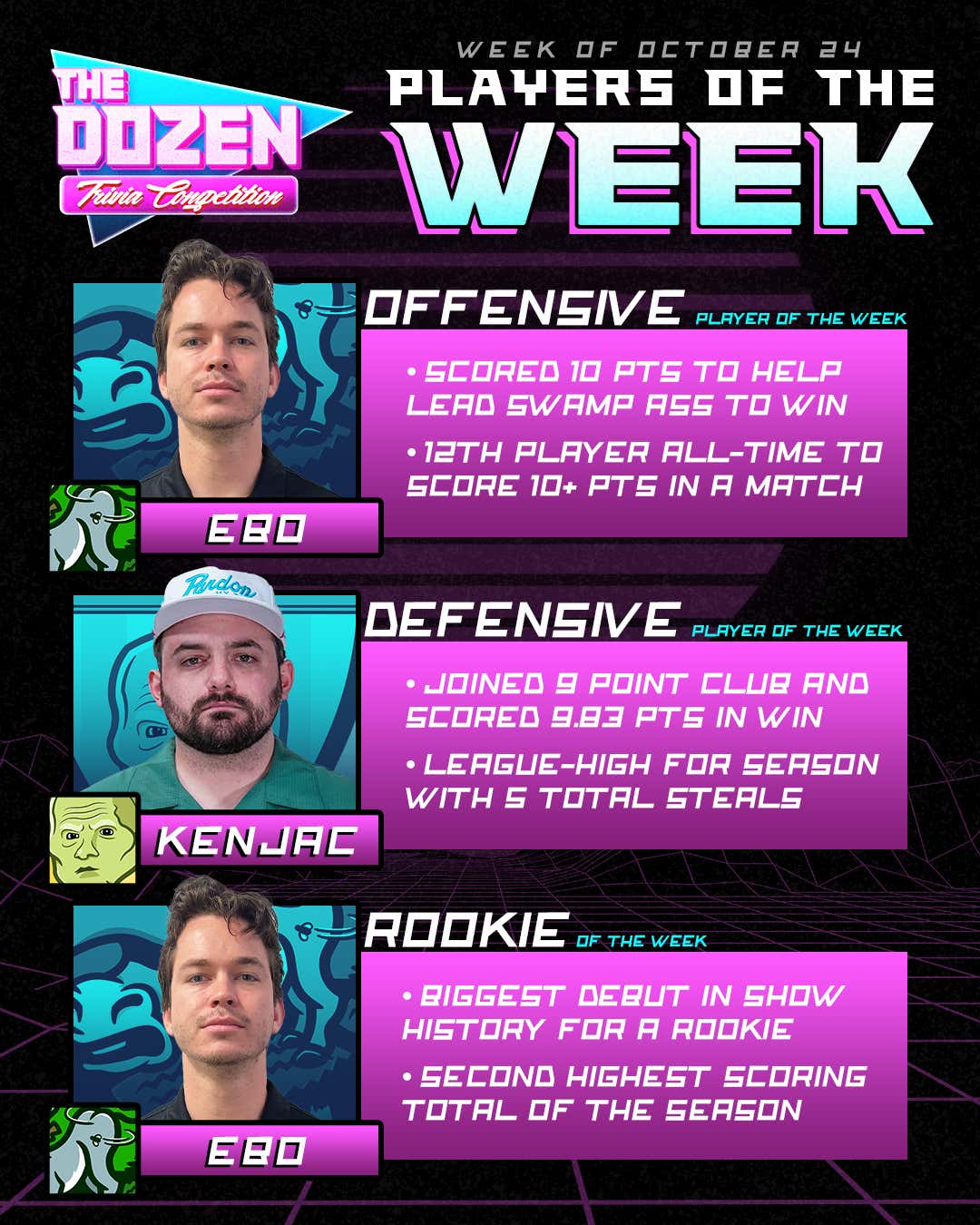 For the first time, the Offensive Player and Rookie of the Week are the same person. Ebo from Swamp Ass came out and dropped 10 points in his Dozen debut guiding his team a dominant win. Nobody even had Ebo on their preseason All-Rookie team and now he is one of only eight people to drop double digits.

Defensive Player of the Week: KenJac

KenJac became only the fourth player in Dozen history to drop 5 steals in one game. He was gunning down questions left and right as he is gearing up to take on The Yak live in New York City.