HipHopDX- A viral video of their confrontation showed Ferguson, who plays Francis “2-Bit” Johnson in 50 Cent’s Power universe, squaring up to a costume-clad Puff and calling him “pussy” in front of a crowd of people.

Diddy, still in Joker mode, took a few steps back and let out a hysterical laugh before replying: “You’re a clown!” However, Puff soon dropped out of character and ramped up the tough talk.

Things became even more heated when Ferguson asked: “What up?” with a smirk, to which Diddy replied: “It’s what up then! Come on here and I’ll bust yo shit! You fucking pussy, make sure you won’t never talk to me like that. I’m love!”

I couldn't care who's right or wrong here, just an all time visual of Diddy yelling at Michael Ferguson in a full on Joker costume. Halloween is super overrated but it leads the way in unintentional comedy. Moments like this prove why. And it doesn't just have to be celebrities either. College campuses always provided a good laugh when a couple would be in a serious fight dressed as Blues Clues. Like how am I supposed to take you seriously? You're standing outside a bar on a corner screaming about your future and you have painted on spots on your face. Ridiculous visual.  Or in your 20's when you would see a fight break out between a meathead dressed as a Penguin and another nutbag dressed as Hulk Hogan. Total unintentional comedy.

So when I saw this video I couldn't help but laugh. Diddy , a man worth as much money as Joker robs in the opening scene of The Dark Knight, screaming in full face paint about God knows what is an under the radar funny moment from Halloween. Screaming "Do you know who I am?" also made me chuckle in the sense that he's in a full costume. Should Ferguson have said Diddy or Joker? If he said Diddy would Diddy have got mad he didn't recognize his costume? Is Diddy a method actor?

Also, absolutely ridiculous that his "crew" of henchman from the movie, is also his crew in real life, including the two guys who had to lift his mask to shoot the video. 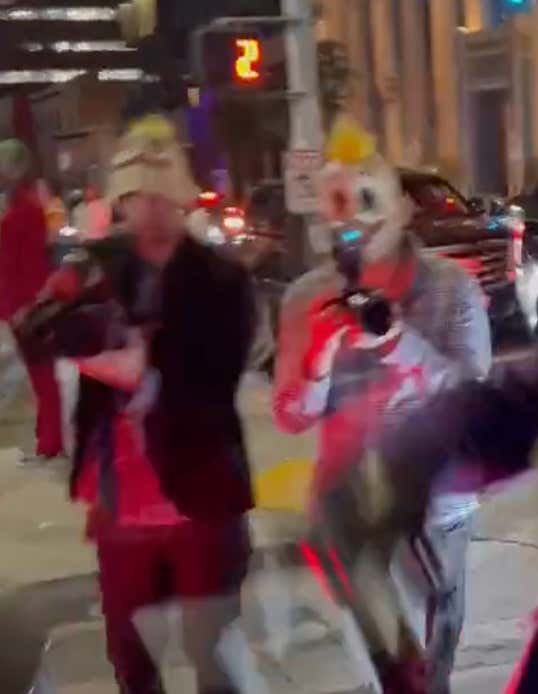 Have some pride guys...