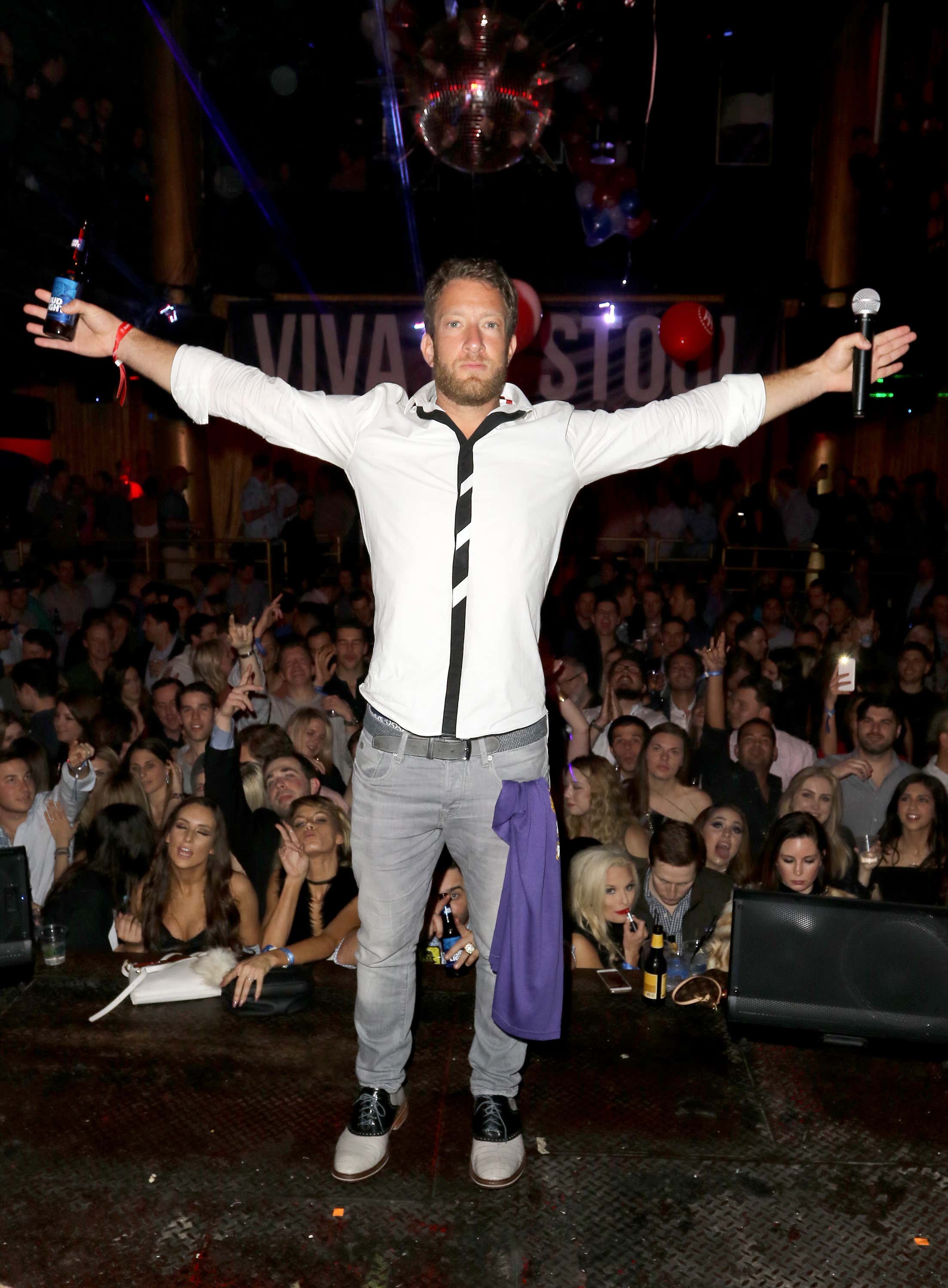 Dave Portnoy faces a potential must win game vs. the Guardians duo of Shane Bieber and Austin Hedges with both teams battling for a playoff spot. With equal records, the loser could be on the outside looking in of the playoff race. 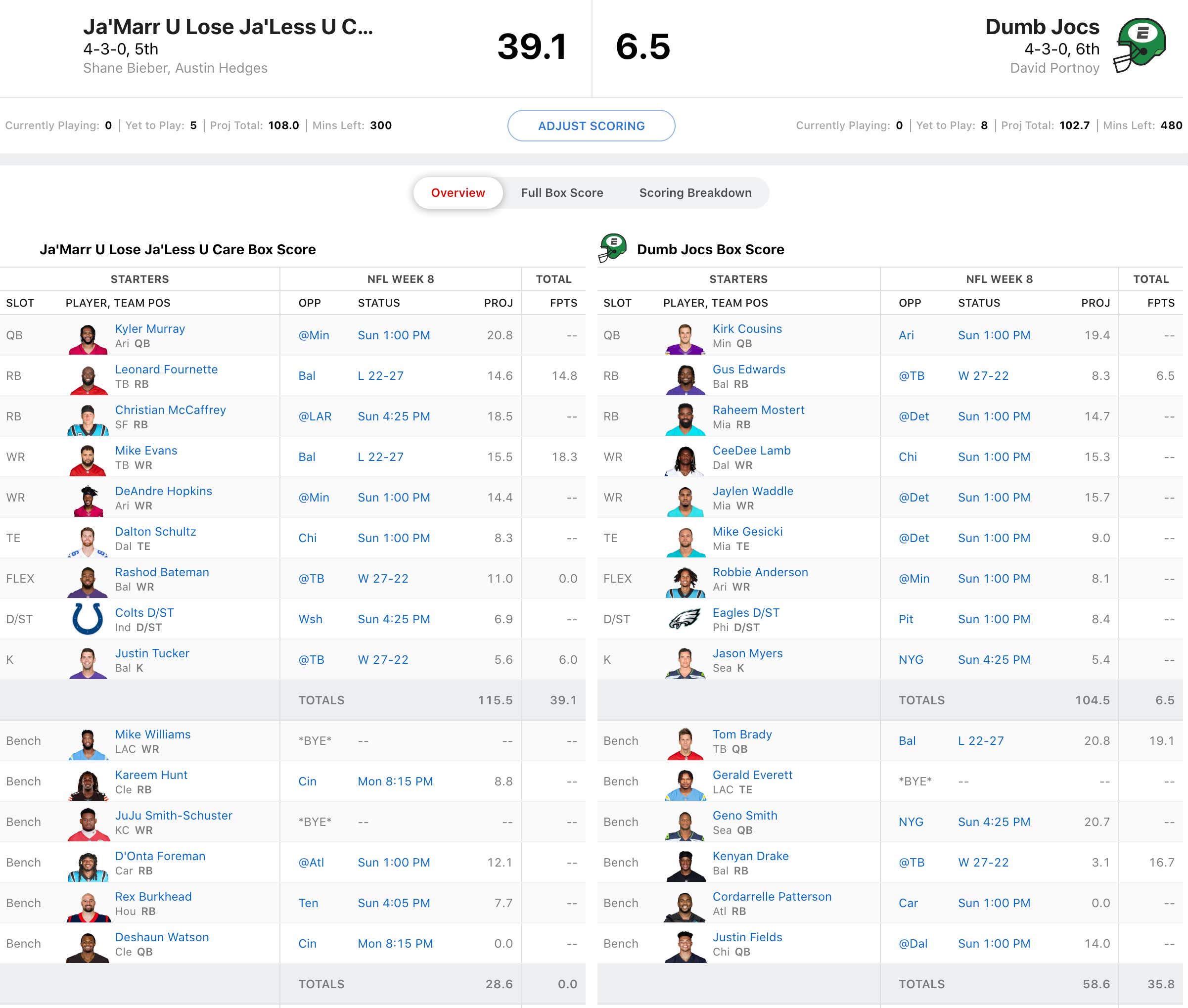 Bieber and Hedges had a bunch of their guys already go on TNF and they did for the most part what they were projected, except Rashod Bateman who was active, but put up a donut and got hurt again during the game. That'll make this a more even game with Dave only a 5.3 point underdog now. These two QBs will square off in the same game with the point total on that being pretty high at 49, so I like both QBs. But Dave does have three Miami Dolphins in his lineup with a projected 51.5 point game on the books. They'll be at Detroit and figure to put up points in bunches. That's favorable with Mostert, Waddle, and Gesicki. Christian McCaffrey sure could explode, especially with Deebo Samuel being out, but I like Dave's matchups better.

These two teams will be watching that Dave vs. Bieber/Hedges game closely as the loser could get leapfrogged in the standings. 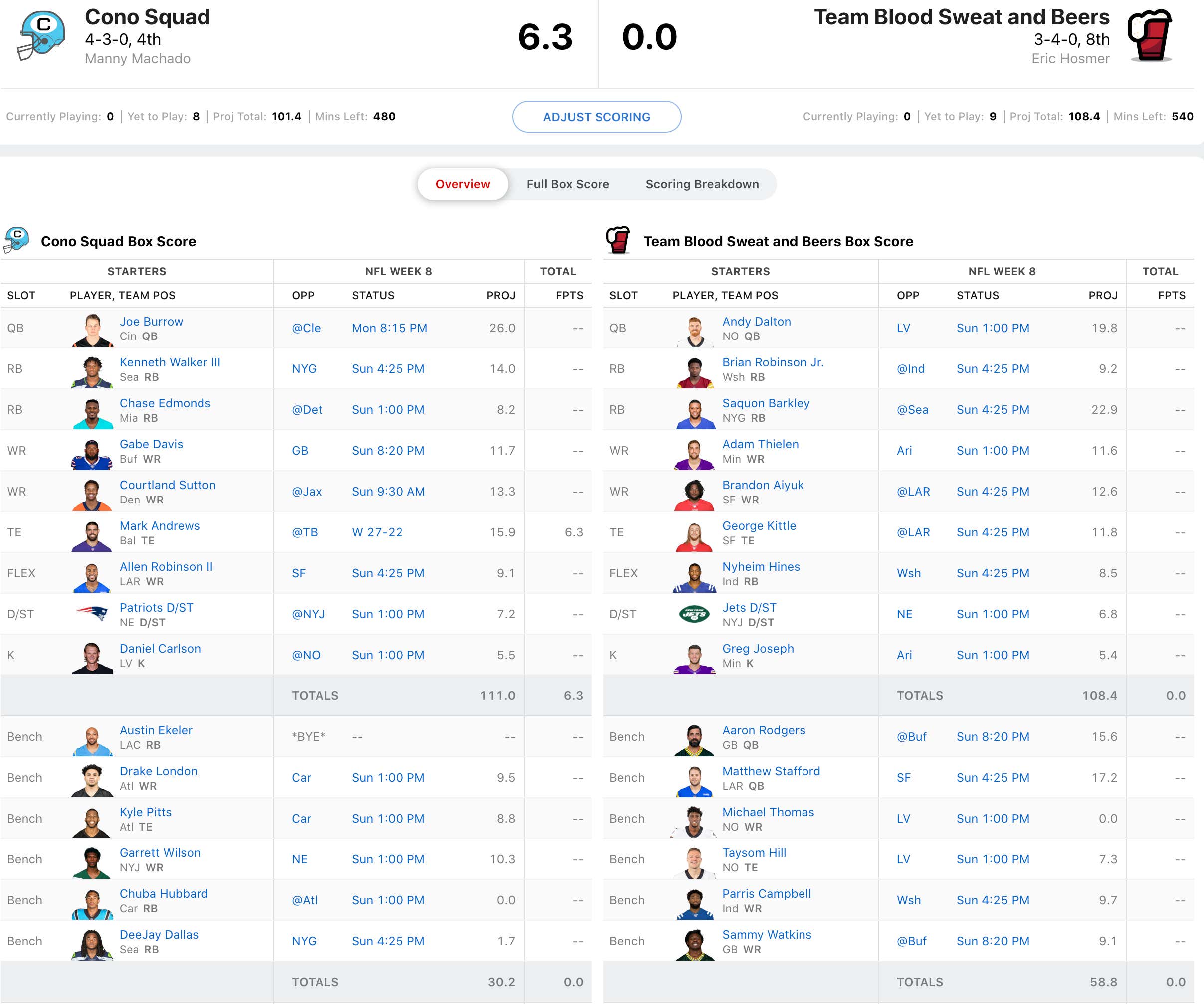 Manny Machado has his top pick, Austin Ekeler on a bye and got a very uninspiring performance out of TE Mark Andrews, but the other team is starting Andy Dalton over Aaron Rodgers and Matthew Stafford! And I actually don't hate the move! What a time to be alive! I expect this one to be under projections, but I just think Hosmer has better matchups and ultimately pulls it off behind the arm of the Red Rifle.

Meanwhile, Wil Myer's team continues to roll and this week he's got Team Questionable who has to be one of the most reliant fantasy teams you've ever seen on the Detroit Lions. 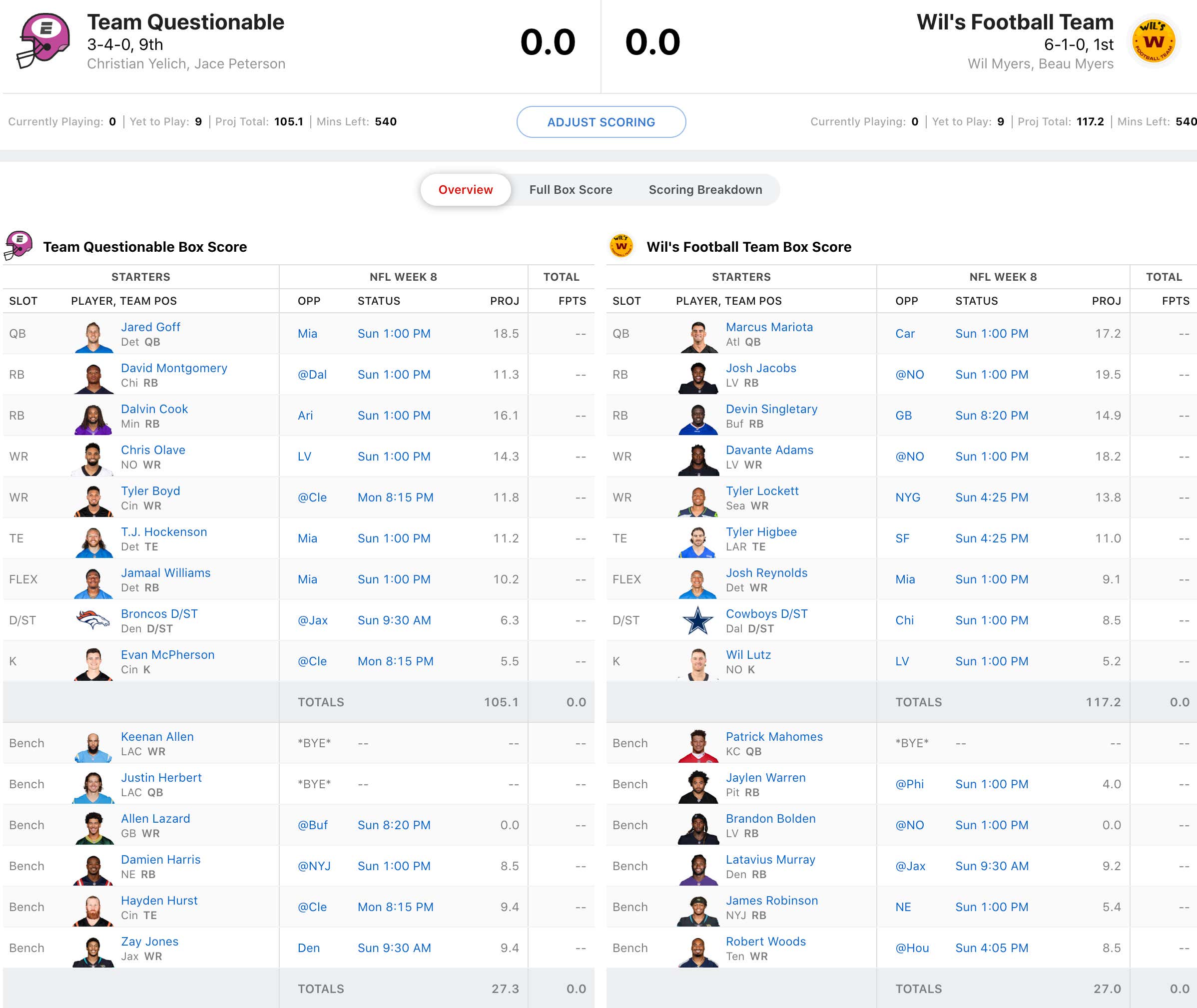 QB Jared Goff, TE TJ Hockenson, and FLEX Jamaal Williams. The O/U in that game is 51.5, so I kind of get it. But in what part of your brain do you think starting 3 Lions in fantasy was a good idea? I'm going to say right now that I do! I actually think Christian Yelich and Jace Peterson can pull a rare upset. Josh Jacobs is rolling, but Davante Adams has the flu and I'm worried about the rest of the starters. Meanwhile, I think Dalvin Ook and Tyler Boyd both have big games propelling them to victory.

Meanwhile, the retooled Mike Trout who now was fantasy's WR1, Stefon Diggs on his squad takes on Mike Napoli in a must-win game if he's serious about contending this year. 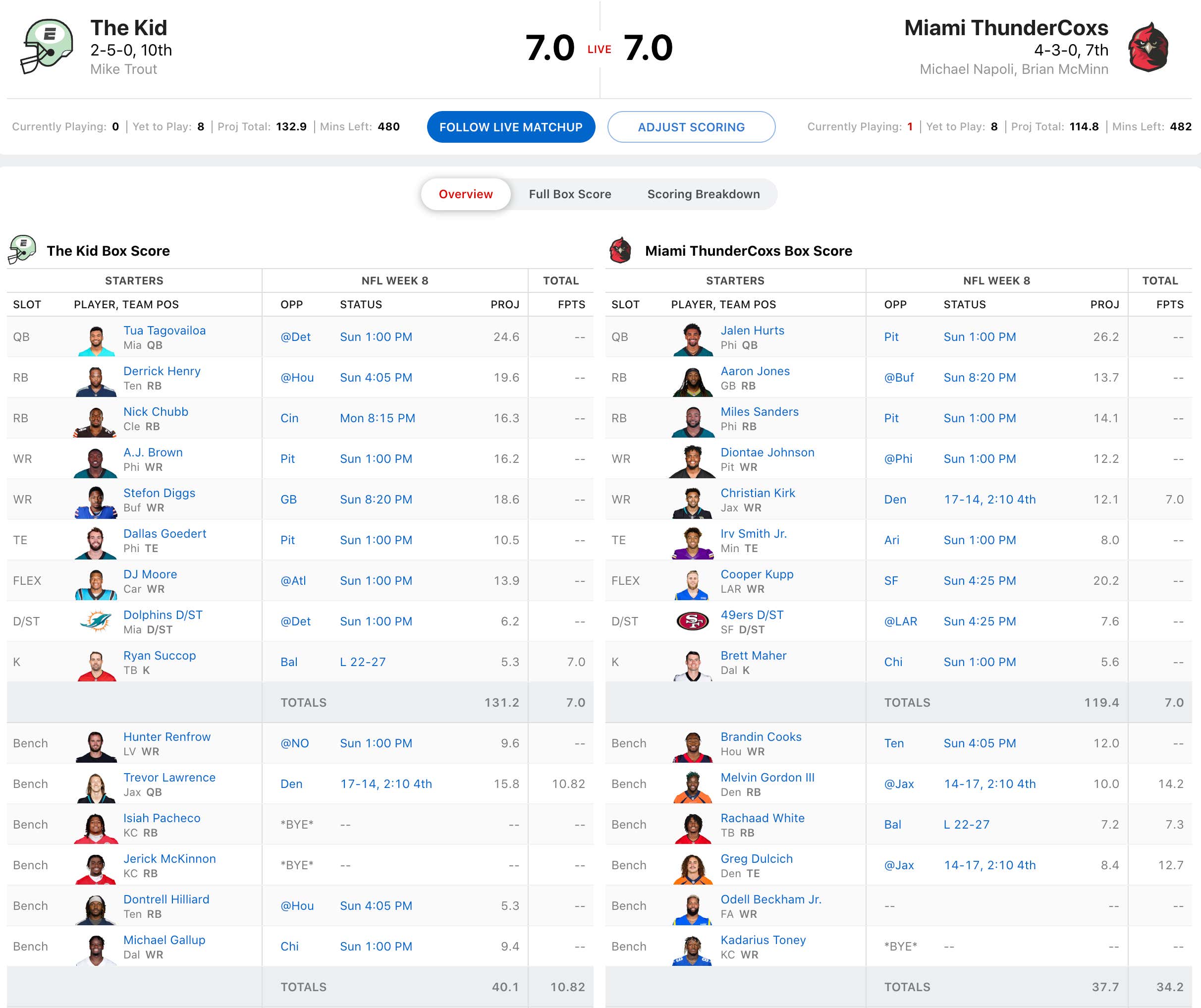 All of Trout's guys have favorable matchups and he already got a plus performance from Ryan Succop on Thursday. Tua Tagovailoa's playing in what should be a high scoring game, both Nick Chubb and Derrick Henry seem like they're ready to dominate their matchups. With Trout having AJ Brown on his side would eliminate any TDs Jalen Hurts throws his way, which would be ideal for him. It could all come down to primetime where Nick Chubb has a tasty matchup vs. the Bengals.

This is the biggest projected blowout of the week with Moose taking on Alex Bregman who may be in last place right now, but he's lighting up the World Series! 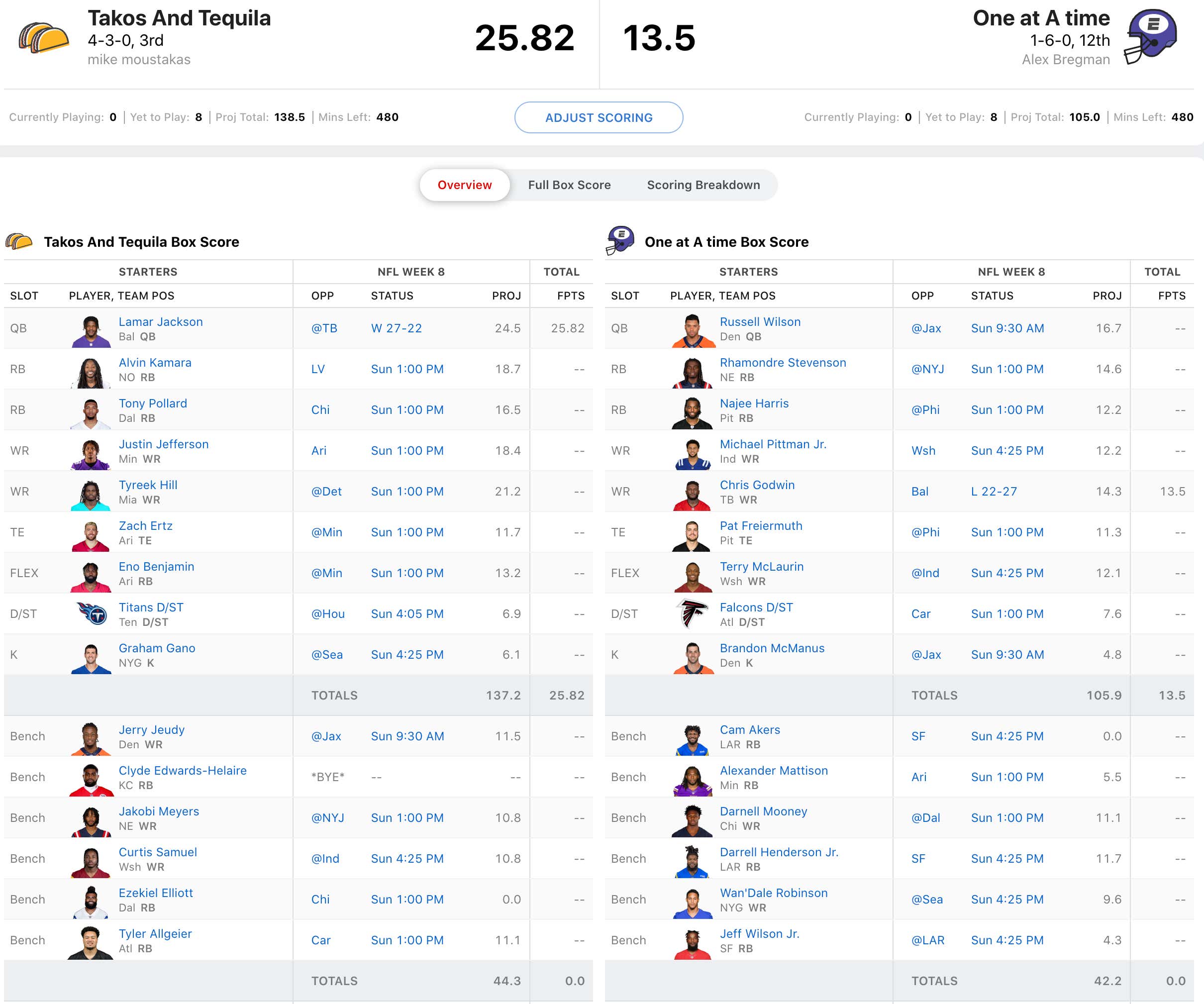 Outside of D/ST, Bregman is an underdog in every single player vs. the freight train that is Moose's team. He got an extra 1.32 points above projection from Lamar on TNF so things are already off to a great start. Zeke Elliott's absence makes way for Tony Pollard which looks like a brilliant deal now. Meanwhile, Bregman is starting Russell Wilson at QB. No wonder he's a 33.5 point underdog! 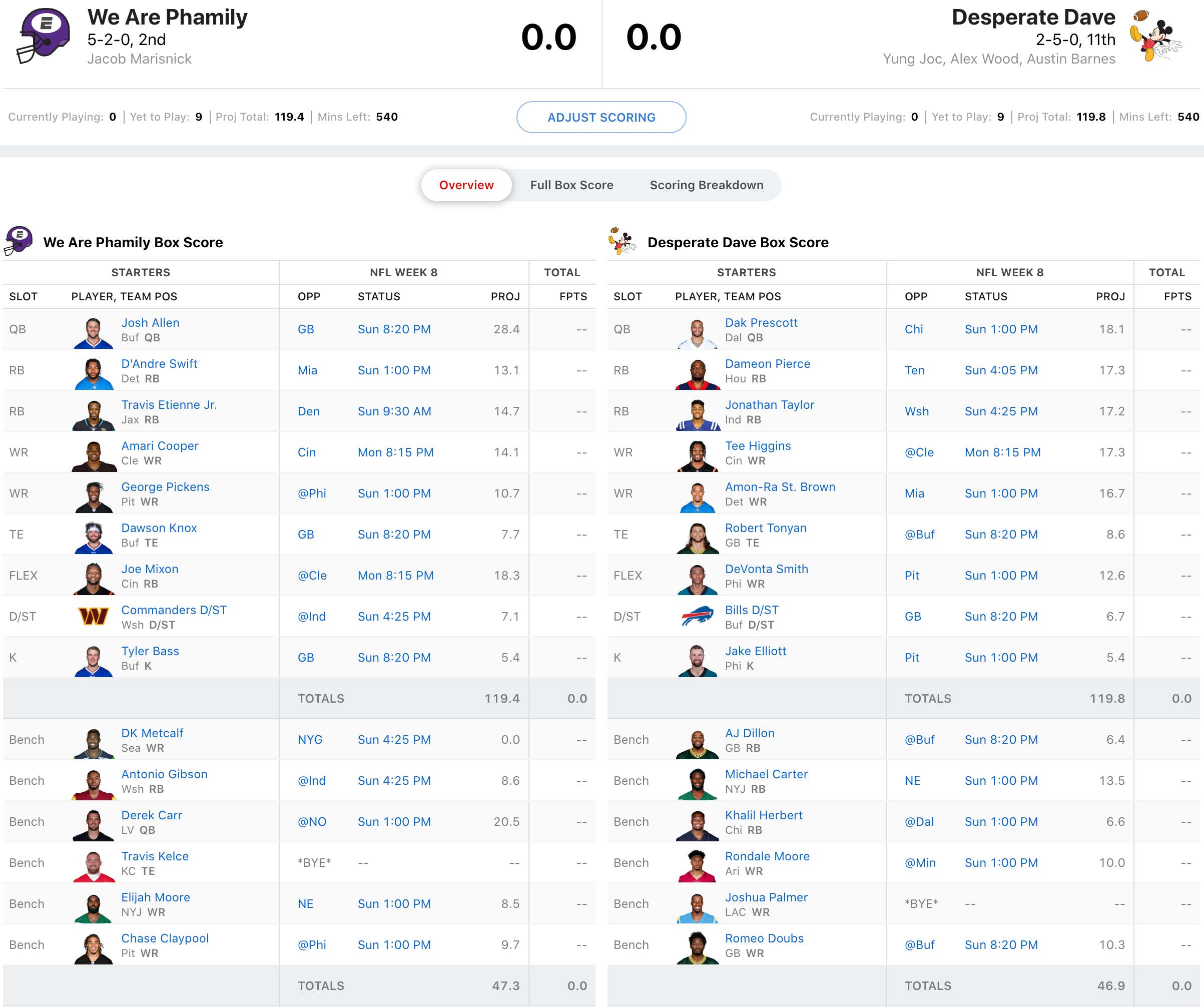 It likely won't get settled until Monday Night as Marisnick has three players in the game (Amari Cooper, Joe Mixon, and Tee Higgins). With Ja'Marr Chase out (injury), and his 1st Round pick, Travis Kelce on a bye, I'm interested to see how things shake out. I just think the Joc, Barnes, Wood group has gotten off to a slow start but they might start streaking tonight with a very good group of RBs and some Receivers coming off injury that are absolutely have a low floor, but a high ceiling. They'll need some of those, but I like Desperate Dave's box scores.