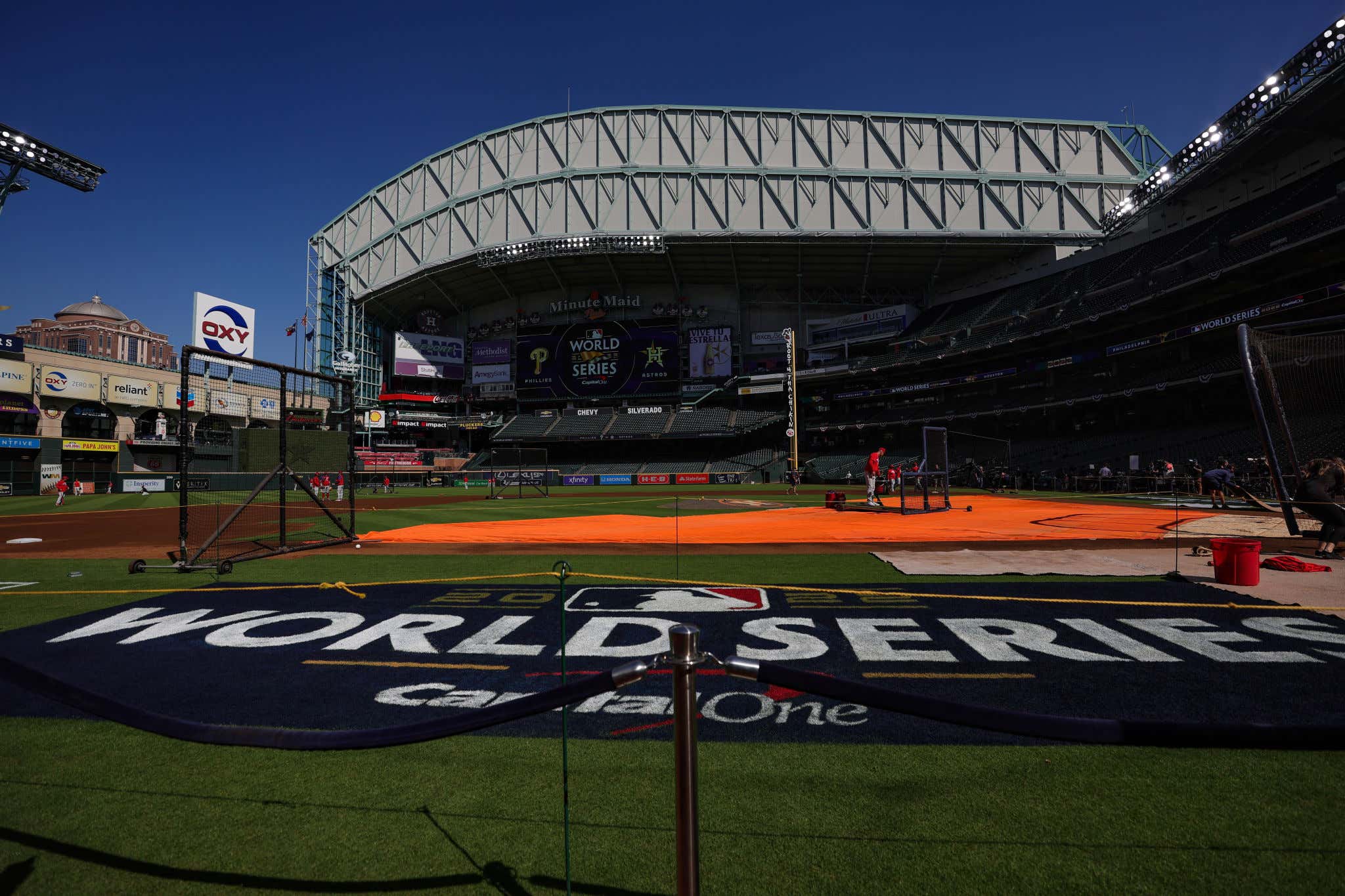 It didn't matter if you aren't an Astros or Phillies fan, this Game 1 was one of the best openers of this century. You had it all. Kyle Tucker hitting two homers. Dominant pitching to start the game for Justin Verlander before the wheels came off. A great Phillies comeback to tie the game. That great catch by Nick Castellanos in the 9th. The game winning homer by JT Realmuto in the 10th. The heart stopping bottom of the 10th.

The bookends of this World Series were soul crushing for Mets fans. Of course, the Series ended in Game 5 when Terry Collins left Matt Harvey in too long in the 9th inning and the Royals were able to tie it up and then go on to win in the 12th. As awful as that game was, Game 1 wasn't much better.

This got off to a crazy start when the very first Royals hitter Alcides Escobar hit an inside the park home run to begin the bottom of the first. Things did settle down and both Harvey and Edinson Volquez (whose father had passed away earlier that day) left the game after six innings and a 3-3 tie. The Mets took the lead in the top of the 8th when Wilmer Flores reached base on a Eric Hosmer error that allowed Juan Lagares to score. The Mets took that 4-3 lead into the bottom of the 9th with closer Jeurys Familia on the mound. Famila was great that year for the Mets saving 45 games with a 1.85 ERA. Going into this game, he hadn't allowed a run all postseason. That ended when he gave up a home run to Alex Gordon with one out to once again tie the game.

From this point on, it was a bullpen pitching duel featuring guys who are normally starters like Jon Niese, Chris Young and Bartolo Colon throwing shutout inning after shutout inning until the bottom of the 14th when Hosmer more than made up for his error earlier by hitting a sacrifice fly that scored the man who started all the scoring: Alcides Escobar. To make matters worse for the Mets, this loss was self-inflicted. They only got one hit in the five extra innings and Escobar was only on base because of a throwing error by David Wright. Speaking as a Mets fan, I don't know why this game doesn't haunt me more. It probably should.

Unlike the others on this list, this wasn't a one run game nor did it go to extra-innings but it was a wild game. This is also the moment when Mark Bellhorn's home run touched the Pesky Pole that Red Sox fans could start to believe that the 86 year drought would end.

People forget how good the 2004 Cardinals were. They won 105 games in the regular season that year. They would be starting Woody Williams in Game 1 against a depleted Red Sox pitching staff that had been put to the limit in the ALCS against the Yankees that had just ended. Instead of being able to start aces Pedro Martinez or Curt Schilling, the Sox had to go with knuckleballer Tim Wakefield. Neither Williams or Wakefield made it out of the 4th inning.

The runs came early and often in this one. The Red Sox got off to a 7-2 lead thanks in part to a David Ortiz home run. But the Cardinals clawed right back behind a great game by Larry Walker who went 4-for-5 with two doubles and a homer. A very young Dan Haren held Boston scoreless for 3 2/3 innings to allow St. Louis to  get back into the game and it stood at a 9-9 tie in the middle of the 8th.

Julian Tavarez came into the 8th and got Bill Mueller to ground out. Jason Varitek reached base when Edgar Renteria would misplay a groundball. Renteria would wind up playing on the Red Sox in 2005 but you can make a case that was the most important play he would ever make for Boston. Mark Bellhorn, long undervalued by teams because of his propensity to strike out was in a slump and was only hitting .162 in the postseason at that point. Bellhorn hit that home run off the pole, Foulke came back out for the 9th (he had finished off the 8th as well) and threw 36 pitches to preserve the victory.

Another Mets World Series, another painful loss in Game 1. Similar to 2015, this is a game the Mets absolutely should have won in a World Series they would lose in five games.

This series started in the Bronx featuring a matchup of Al Leiter against Andy Pettitte. The Yankees came into this World Series looking to win their third title in a row (which hadn't happened since the Yankees won five in a row from 1949-53). A David Justice double in the 6th inning gave the Yankees a 2-0 lead. The Mets came right back and scored three runs in the 7th when Bubba Trammell hit a 2-run double. Pettitte left the game a batter later but reliever Jeff Nelson immediately gave up a RBI single to Edgardo Alfonzo that gave the Mets a 3-2 lead. It would be the last run the Mets would score that night.

The Mets were able to maintain that lead into the bottom of the 9th and they send out closer Armando Benitez to nail down the game. Benitez had saved 41 games for the Mets that season. He wouldn't get a save here as Chuck Knoblauch hit a sac fly scoring Paul O'Neil to tie it up.

Mariano Rivera and Mike Stanton were able to hold the Mets scoreless over the extra innings that followed. Mets reliever Turk Wendell was able to get out of the 11th but in the 12th, he gave up a two out single to usually light hitting Jose Vizcaino which scored Tino Martinez to win the game. It was Vizcaino's fourth hit of the game and last hit of the 2000 Series. He went 0-for-11 the rest of the way but the damage was already done.

So what's the verdict? Is the 2022 Game 1 the BEST Game 1 of the 21st century? I think it is. Both 2000 and 2015 were great games and 2015 had some especially weird moments. Maybe it's recency bias but this was the best played of that group and it was legitimately exciting throughout. I'm excited to see if Game 2 has to offer.