(Posted this last year and went over well. Tried to repost it rather than copy and paste everything but our backend isn't complying. Enjoy)

I'm a pretty big dork when it comes to finding out shit I never knew. Usually the weirder the better. Which is a reason that two of my favorite podcasts I try to listen to religiously are Dog Walk with Eddie and Chief and Twisted History with Large and Vibbs.

If you don't listen to either of them you're really missing out.

Not only are they entertaining as fuck. But the fellas do an unreal job of dissecting obscure topics and conveying useful information in an interesting way.

This week Eddie and Chief did one on the origin history of Halloween monsters - werewolves, vampires, and witches.

As is the Halloween story. I got to wondering how exactly trick-or-treating became a thing so I did some digging. Totally unbeknownst to me, it had some pretty dark and twisted roots. Not the friendly, little kids dressing up as Dora The Explorer that we know today.

For starters, the tradition of Halloween began in Europe more than 2,000 years ago in the Celtic lands that are now Ireland, the United Kingdom, and northern France. On the night of October 31st, the pre-Christian Celts observed the festival of "Samhain", which they believed was the night that the spirits of the dead returned to Earth. People would gather and light bonfires and make sacrifices to pay homage to the dead and to fend off souls with not-so-nice intentions.

The Celtic calendar began its new year on November 1st. So it was believed that on the night of October 31st, as we moved from year to the next, the living and the dead would "overlap".

In order to protect themselves and "blend in" they would dress up as demons or animals using animal's bones and skins. That way if an actual demon crossed their path they wouldn't think they were living. They would also leave food out for the dead as distractions and gifts. 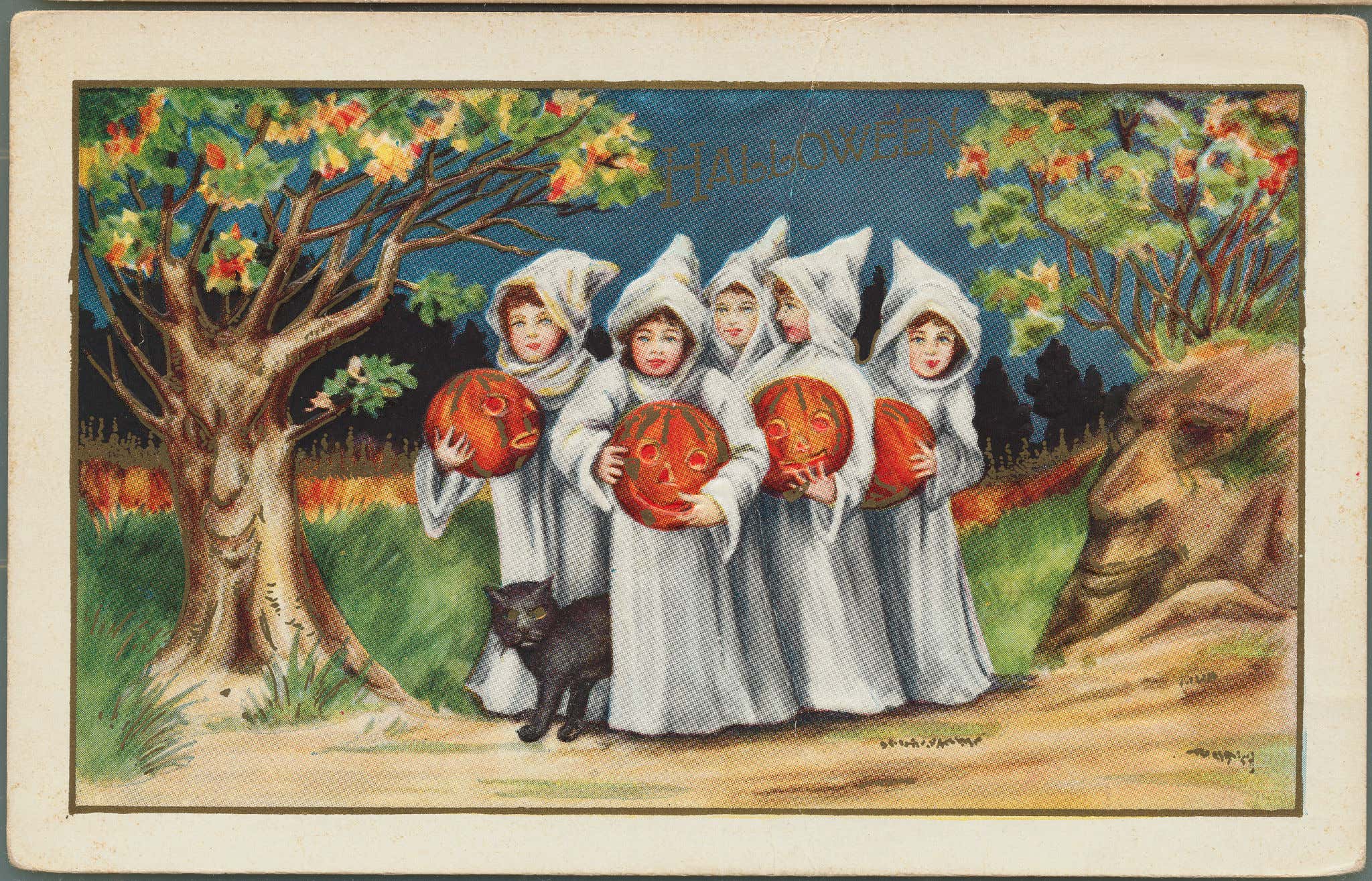 The first "trick-or-treaters" were actually poor children that suddenly had an excuse to go door-to-door begging for food and money during the festival. In exchange, they would offer to pray for the souls of their neighbors' recently departed loved ones.

This practice was called "souling" because it was believed that when you died your soul roamed the Earth and the only way it could find peace in the afterlife was through the living's prayers.

Then years later when the Catholic Church ran the show and were taking over everybody's holidays and converting them, they took this "Samhain" dress-up festival and merged it with "All Souls Day" and called it "All Hallows Eve". Instead of demons and animals, they encouraged people to dress up as angels and saints (lame). The following day they dubbed "All Souls’ Day", a time for honoring the dead.

Poor people continued to go door to door begging for food and money. The wealthy people got hip to this shakedown and began preparing cheap "cakes" in advance which they would hand out to the beggars. They called these "treats" "soul-cakes" because they would hand them out in exchange for a promise to pray for their dead relatives.

In Scotland and Ireland, children at some point around 1000 A.D. began dressing up in disguises of all sorts and trading songs, poems, jokes, or some form of other tricks before receiving their "soul-cakes", pieces of fruit, nuts, or coins. 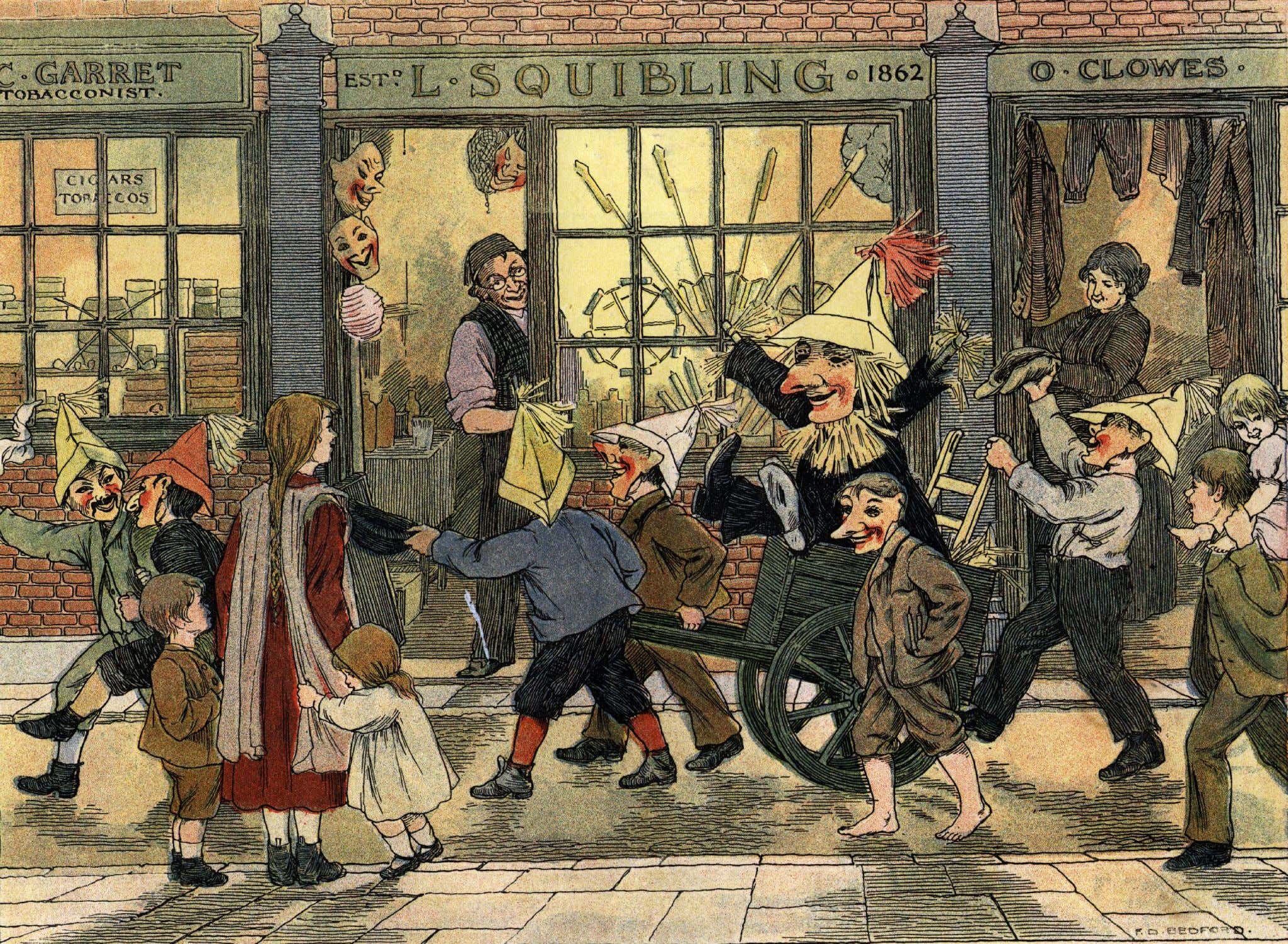 History - Modern-day trick-or-treating also has elements akin to annual celebrations of Guy Fawkes Night (also known as Bonfire Night). On this night, which commemorates the foiling of the Gunpowder Plot in 1605, British children wore masks and carry effigies while begging for pennies. On November 5, 1606, Fawkes was executed for his role in the Catholic-led conspiracy to blow up England’s parliament building and remove King James I, a Protestant, from power.

On the original Guy Fawkes Day, celebrated immediately after the famous plotter’s execution, communal bonfires, or “bone fires,” were lit to burn effigies and the symbolic “bones” of the Catholic pope. By the early 19th century, children bearing effigies of Fawkes were roaming the streets on the evening of November 5, asking for “a penny for the Guy.”

Shit started to get nuts when the Irish and Scottish began emigrating to America in the mid-19th century. When the Potato Famine of the 1840s hit and they came over in droves, they brought with them their customs and their Halloween traditions of "souling" and "guiding".

By the 1920s, the treats had become an afterthought and the children only cared about playing pranks. Things escalated when the Great Depression hit, and Halloween tricks devolved into straight-up vandalism and violence. Turns out kids were little fuckin pricks back then too.

Halloween became some dangerous that some cities considered outlawing it and making it illegal altogether. St. Louis, for one. Obviously.

Across the American countryside in the latter 1800s, common Halloween tricks included placing farmers’ wagons and livestock on barn roofs, uprooting vegetables in backyard gardens and tipping over outhouses—be they occupied or not. In some regions, so many gates were taken off their hinges or opened to allow livestock to escape that October 31 was known as “Gate Night.” A teetotaling Protestant minister in Steubenville, Ohio, awoke after one Halloween to discover his front porch decorated with beer signs and towering pyramids of beer kegs. The advent of the automobile delivered further opportunities for mischief such as removing manhole covers from streets, deflating tires and erecting fake detour signs to confuse motorists.

Boys ran through city streets splattering people with bags of flour or black stockings filled with ashes. One year, youths in Kansas City waxed streetcar tracks on a steep hill causing a vehicle to slip and crash into another streetcar, seriously injuring a conductor.

After a spate of Halloween destruction in 1902, the Cook County Herald expressed the frustration felt by many residents of Arlington Heights, Illinois. “Most everybody enjoys a joke or fun to a proper degree on suitable occasions; but when property is damaged or destroyed it is time to call a halt,” the paper intoned. “We would advise the public to load their muskets or cannon with rock, salt or bird shot and when trespassers invade your premises at unseemly hours upon mischief bent, pepper them good and proper so they will be effectually cured and have no further taste for such tricks.”

This shit is nightmare fuel.

Look how fucked up some of these costumes were.

These were Arlington Heights kids that the newspaper was calling readers to take up arms against keep in mind.

Morton says that by 1933, the holiday had become so destructive that cities were considering banning it. “Many of the cities were smart enough, though, that they thought that while banning might not work, they might be able to buy these kids off,” she says. During the 1930s, civic and religious authorities, community organizations and neighborhood families began to program parties, carnivals and costume parades on Halloween to keep kids out of trouble. “There’s not a lot of money during the Great Depression so people pooled their resources and staged house-to-house parties.” Morton says. “The first house might give out costumes such as a white sheet to be ghosts, or soot to smudge on kids’ faces. The next house might give out treats, the next might have a basement set up as a tiny haunt. This starts to morph into kids getting dressed up and going house to house trick-or-treating.”

This trend of buying kids off with "treats" was abruptly ended when World War II broke out because sugar became rationed for troops, and there wasn't any to make candy or treats with.

When the war ended and the baby boom hit, trick-or-treating made a comeback.

Kids will be kids and they still wanted to play pranks and score heaps of candy so they moved their night of mischief to the night before Halloween in the late 50s and 60s.

In the northeast, this night became known as "Mischief Night". Except for New Jersey. Those weirdos called it "Goosey Night".

Detroit took things to a whole new level like Detroit does and called their night "Devils Night" (D12 who?) and passed on the eggs and toilet paper for straight-up torching buildings.

During the 1970s and 1980s, arsonists turned the Detroit night sky a Halloween orange by setting fire to trash cans, dumpsters and abandoned buildings. The destruction peaked in 1984 when more than 800 fires were set across the city in a three-night arson spree. Detroit responded by instituting dawn-to-dusk curfews for unaccompanied youths under 18 and mobilizing a city watch. With garden hoses at the ready and vigilant eyes, more than 30,000 volunteers participated in neighborhood patrols in 1990. 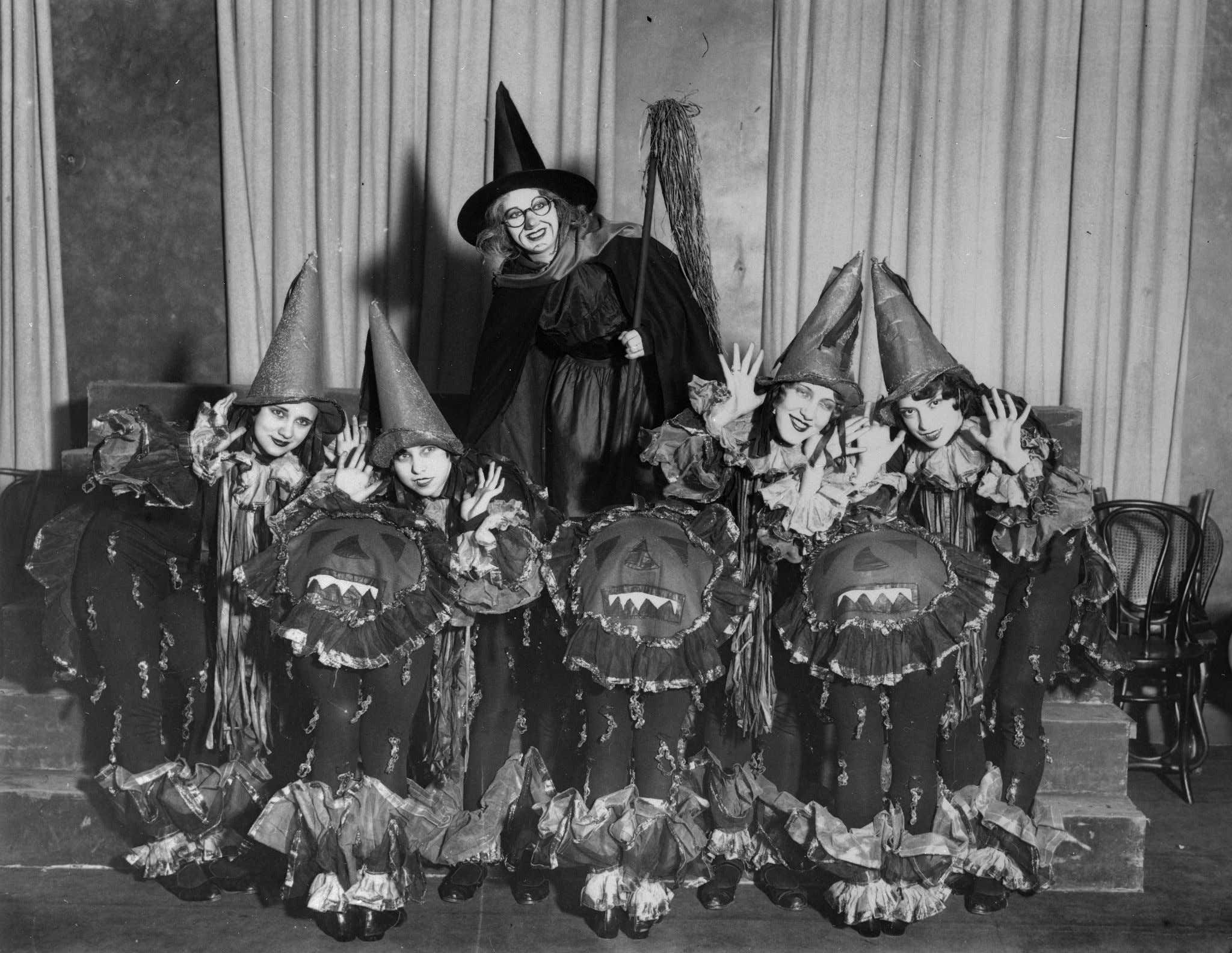 Crazy single chicks dying for a man would perform tricks of their own on Halloween, in hopes that they would find their future husbands.

According to The History Channel, "these tricks involved throwing apple peels or cracking eggs into a bowl in hopes that their future husband's initials would appear. One even had them looking in the mirror in a candlelit room to see a reflection of their beloved's face."

Happy Halloween everybody. Here's a few more pleasant images to get those nightmarish ones out of your memory.