Scrub past the ads to about the :40 mark and you'll see one of the things that makes people like me and all the smart, decent, dedicated members of polite society in New England stay so loyal to this man. This is among the things that has made him survive all the storms and will soon make him the winningest human in the history of pro football.

This is my Bill Belichick: 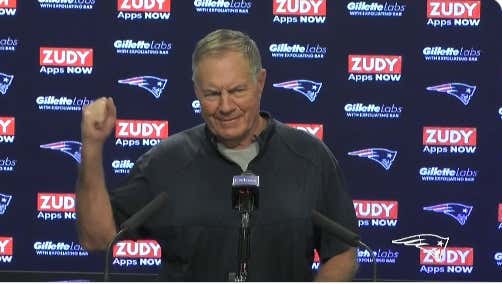 Fist pumping over the fact he's now done pressers on back-to-back days for the first time all year. Smiling. Calm. Projecting that air of confidence in a moment of crisis that separates a Dick Winters from a Lt. Dike. The Jon Snows from the Joffrey Baratheons. Your Churchills from whoever the last British Prime Minister was. His pleasant demeanor and peaceful countenance as the whole world is questioning all his decisions - once again - are the reminders we need that there is no situation this game can throw at him that he hasn't seen, and solved, before.

Also, this sends the message that he doesn't care any more about the opinions of others than he did during the last major crisis. As Athanasius of Alexandra put it, "If the whole world stands against me, then I stand against the world."

Of course he started with a practice update before heaping extra scoops of praise upon the Jets. And the elephant in the room was immediately addressed. Amid reports yesterday that Mac Jones took 90% of the reps in a walk through practice, Belichick confirmed he is the starter. With some charming, witty repartee:

Q: How important is it for you to be able to see Mac get a full workload in?

BB: Yeah, he's ready to do that. So that's what he needs to prepare for the game, and that's what our offensive unit needs, is everybody working together. So we'll get that this week.

Q: Is that what you needed to see yesterday when you told us to wait?

BB: Yeah. Like that's the decision. That's where we are now. If we had been at that point yesterday, I would've told you that yesterday. But when we were at that point, then we let you know that.

BB: Yeah, no not all. Just trying to be helpful

Q: In the situation did you have to tell Mac he is the starter? Or is it kind of understood since he did get the full workload?

BB: Yeah, I talked to all the quarterbacks. So everybody knows where we're at.

Q: So that's the plan for him to start Sunday?

BB: That's what I just said. He's going to have the full load. Yeah.

Which I, like the few remaining rational people still left in this region, am happy about. The Real Housewives of Foxboro who were chanting for Bailey Zappe after the first two drives Monday Night were way out over their skis. Openly rooting for your starting quarterback to get benched for a guy who had two quality starts thanks to a couple of highly conservative game plans, is madness. Especially when said QB1 won you 10 games last year, went to the Pro Bowl, and got you to the playoffs, while the QB2 you were so smitten with was playing UT Martin and Middle Tennessee. A lesson that should have been driven home once the unforced interceptions and failed drives started flying.

So Jones is the starter, as he should be. The plan Monday night was to limit his pitch count. To alternate the quarterbacks, odd as that might seem. Apparently he's got the kind of high ankle sprain that was only going to bother him in even numbered quarters.

But whatever. That issue is spilled beer under the north end zone bridge for now. What matters is Jones getting his job back. And for how long.

Q: When it comes to the plans moving forward, is he able to...

I know how this song goes, so let's dance. People are going to flip their fucking lids wondering why he won't throw his absolute, unequivocal support behind Jones. Why he'd refuse to take it easy on him, therefore putting so much pressure on a 24-year-old with just 21 career starts. Why exactly is known only to him and his coaching staff. And, I'll add, those of us who know how he operates, based on dozens of in-person interviews, several one-on-one conversations, and the bond that can only exist between football coaches. Him with his 327 wins and eight rings. Me with those seasons of being an assistant on youth football JV squads.

This Belichick Whisperer believes that he's putting pressure on Jones because he can. And because Jones responds to it. It's in his wiring. He's simply one of those people who responds to pressure.

It served him well at Alabama. It worked for him in the CFB playoffs. It catapulted him into the stratosphere against Ohio State in the title game, to the point he finished with 5 TDs and 464 yards despite putting the car in neutral halfway through the 3rd. It fueled him as he won the starting job over Cam Newton as a rookie. And he used it to outplay Tom Brady in the absolute pressure cooker that was the biggest single regular season game this franchise has seen in over a decade.

I truly believe Jones is a guy who likes being tested. Who doesn't need to be handled delicately. The kind of competitor who thrives on the challenge instead of fearing it. As the 12th Doctor Who once said about fear:

Let me tell you about scared. Your heart is beating so hard I can feel it through your hands. There's so much blood and oxygen pumping through your brain it's like rocket fuel. Right now you could run faster and you could fight harder, you could jump higher than ever in your life. And you are so alert it's like you can slow down time. What's wrong with scared? Scared is a superpower.

I miss that show being good.

Anyway, how Jones responds is entirely up to him. But in this organization everyone is evaluated all the time. Nothing is given. Everything is earned. Constantly. If a team leader can't produce under those conditions, how is he going to in a two-minute situation on his own 25 needing a score to win? If you can't survive a Thursday press conference, you're not Patriots material. I believe Jones is.

I'm glad Mac is back and healthy enough to play all game. And looking forward to him earning all the starts to follow. And to putting this mess behind us for good.