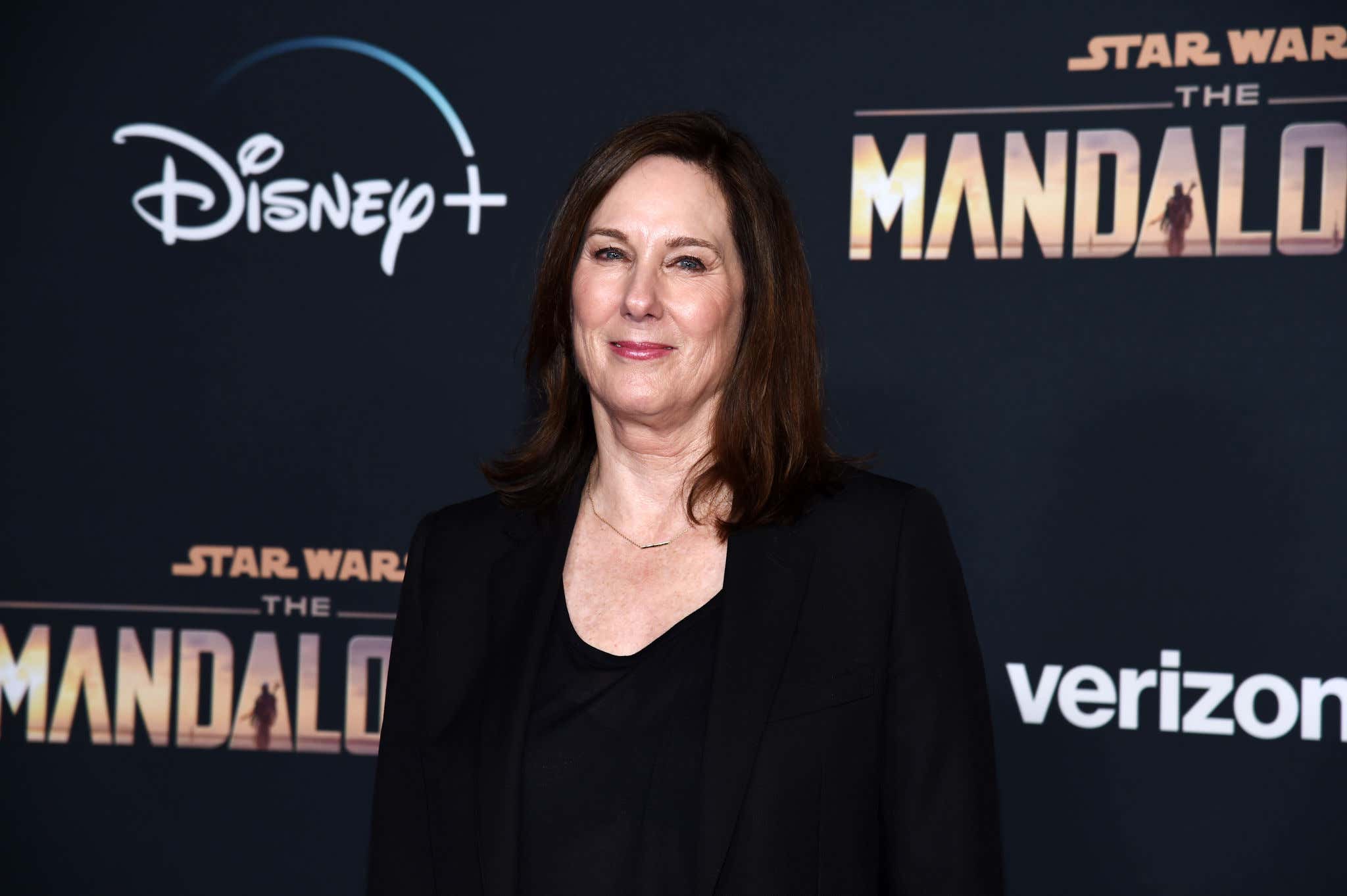 "According to Puck, Lucasfilm President Kathleen Kennedy has been advised by Disney to stop announcing new projects years in advance of their release date. The report comes after a tumultuous few years for the Star Wars franchise that saw several film projects and creative partnerships fall apart after initially being hyped up by Lucasfilm and Kennedy. Notable projects mentioned include Patty Jenkins' Rogue Squadron and the planned trilogy of films that were going to be written and produced by Game of Thrones creators David Benioff and D. B. Weiss.

"[…] The Puck report also mentioned Rian Johnson's proposed Star Wars trilogy as a project that has failed to materialize in the years since it was first announced. However, Johnson recently confirmed that his trilogy is still happening and that scheduling is what is currently keeping them in development hell."

I agree with the premise of this story: Lucasfilm president Kathleen Kennedy has either — or at times, someone has leaked to the trades — far too many Star Wars movie projects that have seemingly failed to get even within striking distance of earnest pre-production status.

Puck is a credible source from what I gather. They have a paywall after all, hence the secondary source citation here. But yeah…the Puck writer called Kennedy's handling of the movie side of the Star Wars franchise "borderline corporate negligence." OUCH.

I blogged a while back about how Rian Johnson's new trilogy is still on. It's just that, you know, he signed this nine-figure package deal with Netflix to continue his self-made Knives Out franchise. So he's been a little busy with that.

Ever since Johnson's brilliant — and you won't tell me otherwise — addition to the saga, The Last Jedi, there has been nary a plan for how to carry the movie side of the franchise forward. The Rise of Skywalker was a critical and audience misfire that was remarkably passably made given the breakneck production schedule, late writer/director changes and the untimely passing of Carrie Fisher.

In addition to the scrapped Benioff/Weiss trilogy and the on-pause Rogue Squadron from Patty Jenkins, multiple other announced projects have yet to come to fruition. Whatever the hell Taika Waititi's brain is cooking up should be interesting. He's always working on a million different things and acting like he's working on nothing, though, so who knows what stage of development that thing is in. Then I vaguely remember that J.D. Dillard was developing a film. Have heard zilch about it and assume Dillard's joint is as definitively dead as Papa Palpatine.

Michael Waldron is working on a Star Wars script to be produced by Marvel Studios powerhouse Kevin Feige. That seems like a dynamite combo. Quiet on that front, too.

The project that's gained the most steam in recent weeks is the one Damon Lindelof of Lost and Watchmen TV fame is toiling away on, via The Hollywood Reporter:

"Lindelof is writing the new Star Wars script with Justin Britt-Gibson, a young and rising writer who worked as an executive story editor on Guillermo del Toro’s vampire drama, The Strain, and wrote episodes of Starz’s The Counterpart, a series that deals with parallel dimensions and starred J.K. Simmons. […] Sources say the movie project is intended as a stand-alone but in success could lead to more movies. That plan goes against the grain of earlier Lucasfilm development process’, which saw the company try to come up with new trilogies. Now, the studio seems to focus on stand-alones.

And sources say that the story would take place after the events of 2019’s Star Wars: The Rise of Skywalker, although it would not be a continuation of the Skywalker saga. It could, however, feature some of the characters from the Star Wars trilogy made in the 2010s."

That thang ain't due until late 2025 at the earliest. Good news: Filoni might have been loosely involved. I trust that man and so should you!

Sometimes, studios have multiple writers developing scripts for the same project and then whoever writes the better one gets the green light. I don't think this is that. This seems, on the surface, akin to what Warner Bros. was doing for a while with DC. Blind dart throwing and seeing what sticks.

But in the spirit of Star Wars itself and the message of overarching hope it's meant to inspire, I'm not choosing to view the state of the franchise as all doom and gloom — despite the seemingly slim chances we'll see another movie any time soon.

Coming off the lukewarm-to-negative reception for Episode IX, with the rise of…streaming and then, uh, that whole COVID-19 pandemic thing, OF COURSE Star Wars was going to lean toward TV. You can't sell your last movie as wrapping up all nine films in the Skywalker saga, and then slapdash release another one like two years later. It wasn't feasible on a variety of levels at the time.

The Mandalorian is a huge hit, and while many of the Disney+ series kind of feel like "baby's first hero's journey" story threads and seem to pad runtimes for a certain minutes quota in many instances, I believe the groundwork is lain to become bolder. That's because there are two strong, creative forces driving the bus in Jon Favreau and Dave Filoni. Favreau is a five-tool entertainer and master storyteller. Filoni is up to his eyes in Star Wars mythology thanks to being George Lucas' right-hand man for many years working on The Clone Wars animated series.

Now that Filoni has that experience, his oversight of the wonderful animated Star Wars Rebels and now multiple live-action Star Wars credits under his belt, the TV side of things is in good hands. Kathleen Kennedy had the wherewithal to trust Favreau and Filoni with that. They should at least be consulting or executive producers on whatever is done movie-wise going forward, but they're likely too tied up to put their full time and energy into developing those projects as well as the broader TV universe.

With the exception of Mando Season 3 and Filoni's passion project Ahsoka — which should be a continuation of Rebels, so get on watching that shit if you haven't — we're seeing other visionaries get their crack at telling new stories. Andor is masterminded by Rogue One rescuer and Oscar-nominated writer-director Tony Gilroy. In 2023, we should see The Acolyte from Russian Doll co-creator Leslye Headland, which is meant to be set approximately 100 years before The Phantom Menace. A totally new part of the timeline we've never seen explored on screen.

New, awesome shit is coming to a galaxy far, far away on the small screen. Whatever qualms you might have with The Book of Boba Fett and Obi-Wan Kenobi, those shows still offered some epic moments.

Additionally, you have to admit, Andor is badass, The Mandalorian is only going to get better and deeper, Ahsoka Tano is one of Star Wars' best characters ever don't @ me, and The Acolyte is a totally original, new thing. As is the currently-filming Skeleton Crew, which is centered around a group of kids but is anchored by top-billed star Jude Law.

Taking the time to get it right is a good thing

It may seem as if Lucasfilm has zero idea what it wants for the next movie in this mega franchise, but since details are so scant and minimal on any of these, isn't it conceivable that they're all set at different time periods? And it stands to reason that most, if not all of the developing scripts are focused on new characters to move away from the Skywalkers. It's a big galaxy after all, and you can jump around the timeline all you want in theory to give fans something new.

Another element at play here is how COVID pushed back so many major studio release dates. Disney isn't immune to that. Between that and all the attention focused on the myriad streaming series, it's even further reason not to be alarmist about the next Star Wars movie being a few years off or so.

Would you look at that? About an hour ago, Favreau and Filoni gave us a promising update on the direction of Star Wars going forward. Should you not take my word for it that an exercise in patience would do all us fans a world of good, perhaps you'll be reassured by them. They're confident in what they're building on TV, it should only keep enhancing the brand overall, and as the galaxy expands narratively, it'll only feed the hype and demand for movies.

At the end of the day, it's a bottom-line business. Disney+ is crushing it for the most part streaming-wise, so what's the big rush to fast-track a half-baked idea for a Star Wars movie when people are still pretty sheepish about going to movie theaters? Star Wars is such a moneymaker for Disney that I understand the temptation to meet arbitrary, too-tight release date deadlines. That said, I think what the higher-ups might be realizing is, "Oh, because we're basically guaranteed to turn a profit at the box office, maybe we can, you know, indulge in the luxury of crafting a beautiful, thought-out story, and making the next step forward in our movie slate coherent, moving and worthwhile to get cynical, passionate fans back in our good graces!"

That's how I'm choosing to see it. I'm a lifelong Star Wars fan and I admittedly view the franchise as a whole with rose-tinted glasses. There's some truth to the notion that nobody loves to hate Star Wars as much as some of the lifelong fans themselves. I ain't in that camp. But I get where that resentment comes from. The bar was set so damn high from the jump in 1977 that anything short of it can be taken very, very hard by some people. Fair game.

To finish all this off: Why not give Disney Star Wars one last chance if you view their tenure as a total failure? They've gotten the Skywalker saga out of the way, if you like. They're killing it on the small screen by most accounts. Let's see what they're cooking up with all these talented creatives who should have almost full rein to tell original stories in the giant sandbox George Lucas created. I have a feeling some pretty special stuff is on the horizon.