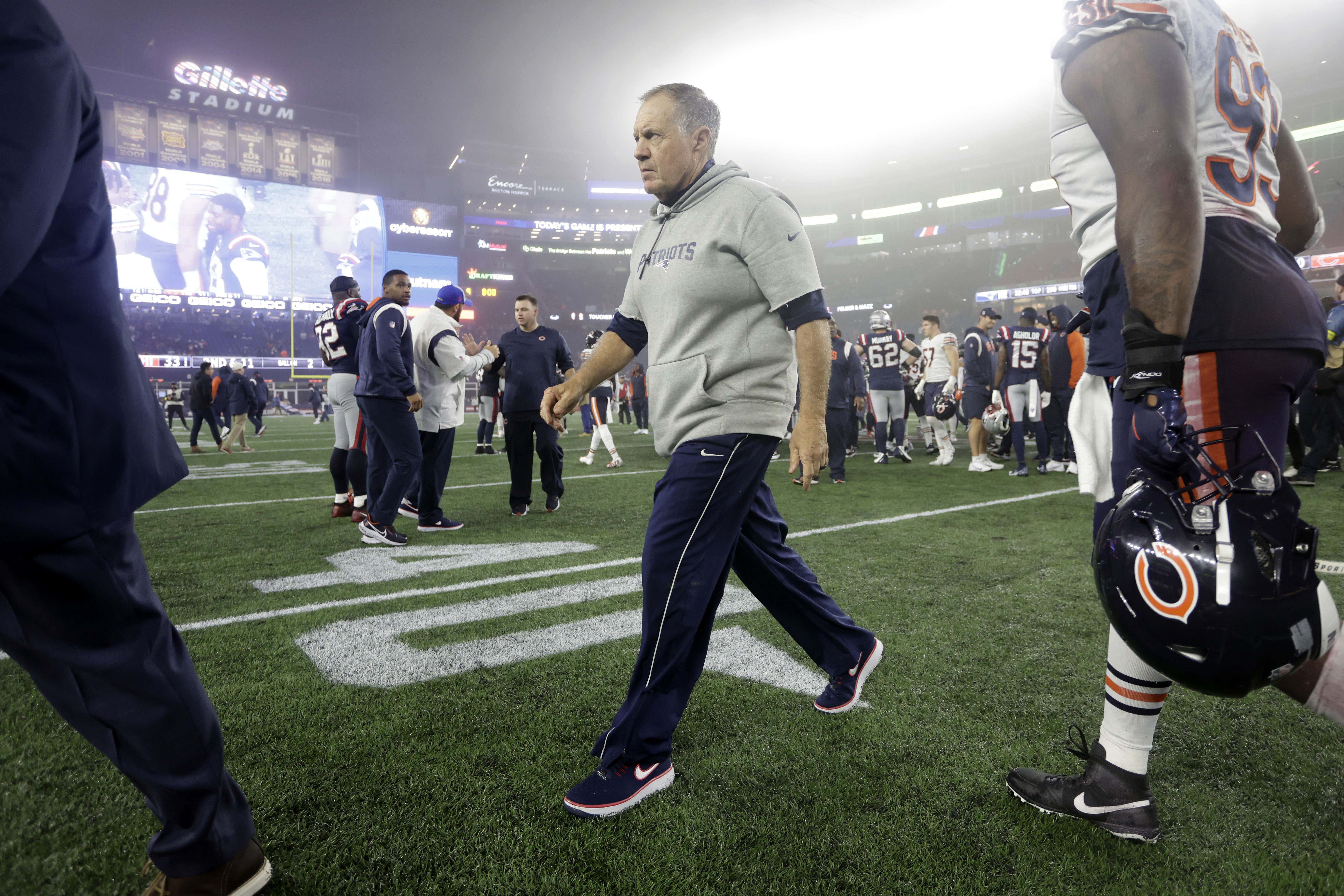 By its very nature, faith is something that gets tested. The dictionary defines it alternately as:

Of course, often there is proof. For instance, you can have faith a loved one will care for you because they always have. Or that certain cultural institutions will be there if you need help because you see the firetrucks and ambulances respond.

My worldly faith is centered around a football coach because he's got an unmatched track record of doing things better than anyone ever has. Yet, while that faith has never wavered, like anyone's belief system, it does get tested from time to time. You can be the most devout person in the world, but if you watch a tornado level your house, you can be forgiven if you question why your Creator is messing with you. We're only human.

As a Belichickian philosopher, I too have pondered the question of my loyalty once in a great while. The examples are obvious. Releasing Lawyer Milloy. 4th & 2 (though I agreed with it). Trading Richard Seymour. Spygate (despite what a nothing burger I thought it all was). Kicking to Peyton Manning's Broncos in overtime (which worked out brilliantly). Going for it on 4th & 13 from the Giants 31 in The Super Bowl That Shall Not Be Named Part I. Not calling timeout with Seattle running the clock down in Super Bowl XLIX (also brilliant). And of course, the departures of Tom Brady and Rob Gronkowski.

But I always came down on the side of loyalty to the creator of this dynasty. With the understanding that with a track record like his, you have to accept some things don't make sense from the outside looking in. Not in real time at least. As early 19th century German philosopher Arthur Schopenhauer said, "Genius lives only one story above madness." Or as late 20th century lead singer of Spinal Tap David St. Hubbins put it, "There's a fine line between stupid and clever."

Still, I'd be lying if I'm not having one of those walking-through-the-rubble-where-my-living-room-was moments, looking up at the sky and wondering why. Both for the way Belichick handled the quarterback situation this week, last night, and in the 18 or so hours since that Monday Night twister,. A titty twister, at that.

And nothing he's said on the topic since has restored my faith.

First, from his postgame presser:

Q: I believe you told ESPN that the intention was to play both quarterbacks in this game. Was that because of Mac Jones' health?

Q: Who is the starting quarterback?

BB: We just finished the game.

Q: So when Mac came out of the game, Bill, was that a medical decision, the timing of pulling him?

Q: Was that related to the interception? That was his last play tonight.

BB: No, we had planned to play him. I told the quarterbacks that we were going to play both of them, and that's what we did.

Q: Was the plan for three series? It seems, when his last play is an interception, it looks like a benching for performance.

Q: Was Mac Jones aware he would play only part of the game?

Q: At what point in the week did these guys know at the beginning of the week that this was the plan all week long, or how did it work out with reps at practice?

BB: We went through the week.

Q: So they were aware of the situation that they were going to split reps?

BB: We went through the week of practice. Mac was inactive last week.

Q: Bill, was there any consideration toward putting Mac Jones back into the game as the game went on, or was the decision to stick with Bailey after the third series sort of set in stone?

BB: No, he would have gone back in. The score got out of hand. I didn't think that was the right thing to do.

Q: Wanted to ask you, I know you mentioned the whole situation last night as the benefit of the pre-planned rotation at quarterback. Why was the decision more complicated once Mac [Jones] was healthy, to simply play the better player for the whole game?

BB: Well again Andrew [Callahan], there's a lot of things that went into that. So I don't really have the time to get into it here. It's more complicated than that. But I'll just leave it as we did what we felt was best for the team and the players involved. Obviously, it didn't work out. But that was the decision. …

Q: As you move forward, is it fair to say if he's healthy, he's the starter?

BB: Again, that's a hypothetical question. So let's see where that is and what that is.

Q: I'm just curious, you mentioned health was one of the reasons he came out of the game. But he made mention of the fact that he felt pretty good last night when we spoke to him.

Well, I'm glad we cleared that up.

Look, I've said a million times here and will continue to until the last nutrients leave my body: Of all Belichick's many geniuses, none is more brilliant than his ability to put up his deflector shields and take all the energy out of a controversy. Right now, sitting here after that horrific game and that nonsensical handling of the quarterback situation, feels like the opposite. It feels like beaming energy into it and giving it more power. It certainly adds to the confusion.

If Jones is healthy enough to play, why go into the game planning on alternating him and Zappe? If he's on a pitch count, so to speak, how was that determined? I mean, this isn't like limiting a running back's carries. Tell us what the plan was. As far as how much time we have for him to explain, this is a guy who a while back gave a 10 minute answer about long snappers. And this week spent seven minutes and over 1,000 words telling us how good the Bears are. (Note: We should've listened.) When it suits his needs, his answers can be what "Free Bird" is to a Classic Rock DJ, a long break so you can go do a No. 2 in the clean men's room back in the office in peace. But with the most important issue of the season being discussed, we've got to change the subject and not get into it. Suddenly brevity is the soul of wit.

To beat the religious metaphor even further into the ground, these answers read like scripture. And by that I mean they're practically impossible to figure out. Do we interpret this literally? Is it allegory? I prefer my matters of faith explained in parables, because I can understand and apply those to my everyday life. But for these answers, I need a scholar to explain them.

And as an aside about going with two quarterbacks, a little historical perspective. I read a book  - make that, wrote a book - that described how back in the early days of the Patriots, head coach Mike Holovak couldn't make up his mind between quarterbacks Butch Songin and Babe Parilli. Sometimes between plays. It failed utterly. The only times it's been tried since was for a little while with Tom Landry's Cowboys, when he tried to toggle back and forth between Roger Staubach and Craig Morton. And for a shorter time still, Lloyd Carr tried it at Michigan, playing Drew Henson and the greatest QB who ever lived one quarter each and giving the second half to whomever played better. You know how that turned out. Apart from bringing in a guy to run a Wildcat or some similar gimmicky constraint play like the Saints have Taysom Hill, it's a mess. And it's astonishing to think the Patriots staff would go into a game with that in mind.

The bottom line is that all this could be explained with a simple "When Mac is healthy, he's our quarterback." The fact that he goes to the default setting of "hypotheticals" any time that question comes up, can only be taken as there's a LOT going on here. Mysteries of the universe type stuff. Some grand, divine plan that he won't explain because it's beyond our limited comprehension. Or the answer would be too terrifying for us mortals.

That's all I got. As Fr. Cavanaugh explains to Rudy Ruttiger, we pray in our time. The answers? They come in God's time. I just think getting mine by the start of the Jets game isn't too much to ask.