I blogged about Olivier earlier this year, but he's going viral again. I don't blame it for happening. He's just starting his sophomore campaign and it's fucking hilarious to watch. The dude is 7'6" - the world's largest teenager, of course that's a cheat code. It's also obligatory to post this

He's been in the news since he was 12, because again, he's 7'6". That's a giant human being that I assume Matt Painter and Purdue will land. Imagine him and Zach Edey there together. Imagine them hitting the bars and just towering over everyone. Would actually make me want to go to West Lafayette.

I said it before and I'll say it again. At least he's using his size to be good. Nothing pisses me off than seeing a tall guy who stinks at sports. How can you be that tall and either not care about sports or not be somewhat talented? You won the genetic lottery! You already have the height - something you can't teach. At some point you gotta work with someone that can figure it out. At the minimum call Kevin Bacon - he has success with these sort of guys. Watch The Air Up There one time.

He's just fucking huge. We all knew that kid growing up. The one who had the growth spurt before everyone else and was AWESOME during like rink and junior basketball. Then everyone caught up and he had to be a 5'10" big man because he never grew and never learned how to dribble. That's this on steroids. I keep laughing at this image. Good attempt. 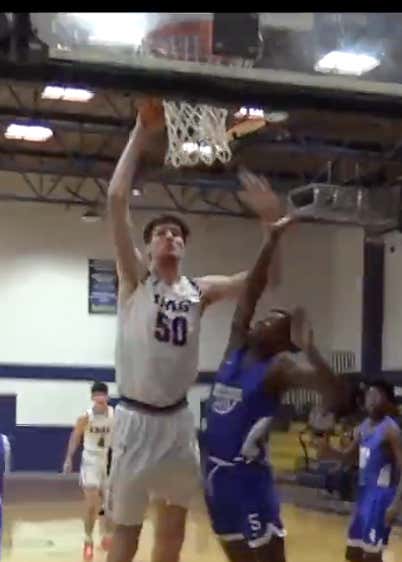 Intimidation factor at its highest though is being 16 and staring at the rim. Good luck coming into the paint against the big man. Just let him stand there - he actually moves pretty well for his age/size - and let teams shoot over him. The man has gotta be putting up video game numbers. Makes up for having to live life at 7'6". No way is that comfortable.