When his wife dies and he is forced to retire from his job of nearly 40 years, grumpy 60-year-old Otto decides to commit suicide. But his attempts are constantly interrupted by his boisterous new neighbors, which leads to an unlikely friendship.

Like the title suggests, this reads to me like PG-13 Gran Torino. Grumpy old man with a very dead wife has immigrant neighbors move in next door. He hates them at first but eventually grows to like and defend them. Something tells me that Hanks won't get riddled with bullets at the end of this, but still. The big missing component is Hanks not being a war vet. Although, with a name like Otto, who knows. Maybe he was born in Brazil and his dad was a war veteran if you know what I mean.

This is from director Marc Forster, who has a truly bizarre filmography. 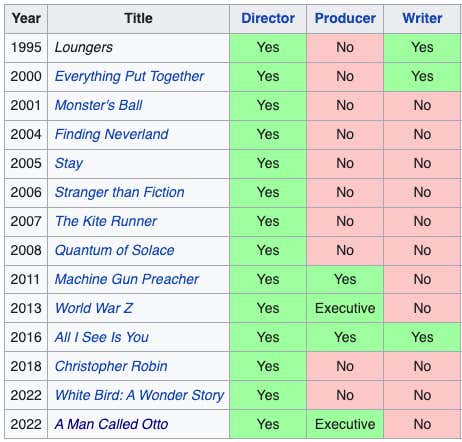 Shout out to him for jumpstarting my puberty with Monsters Ball, though. This movie is based on a Swedish book that was also made into a movie over there. Both were well received, but we'll see how this pans out. Tom Hanks is on a sneaky cold streak the last few decades after about the hottest decade any actor has had in the 90's.

The man is a joy so I'd love for him to get right with this movie.