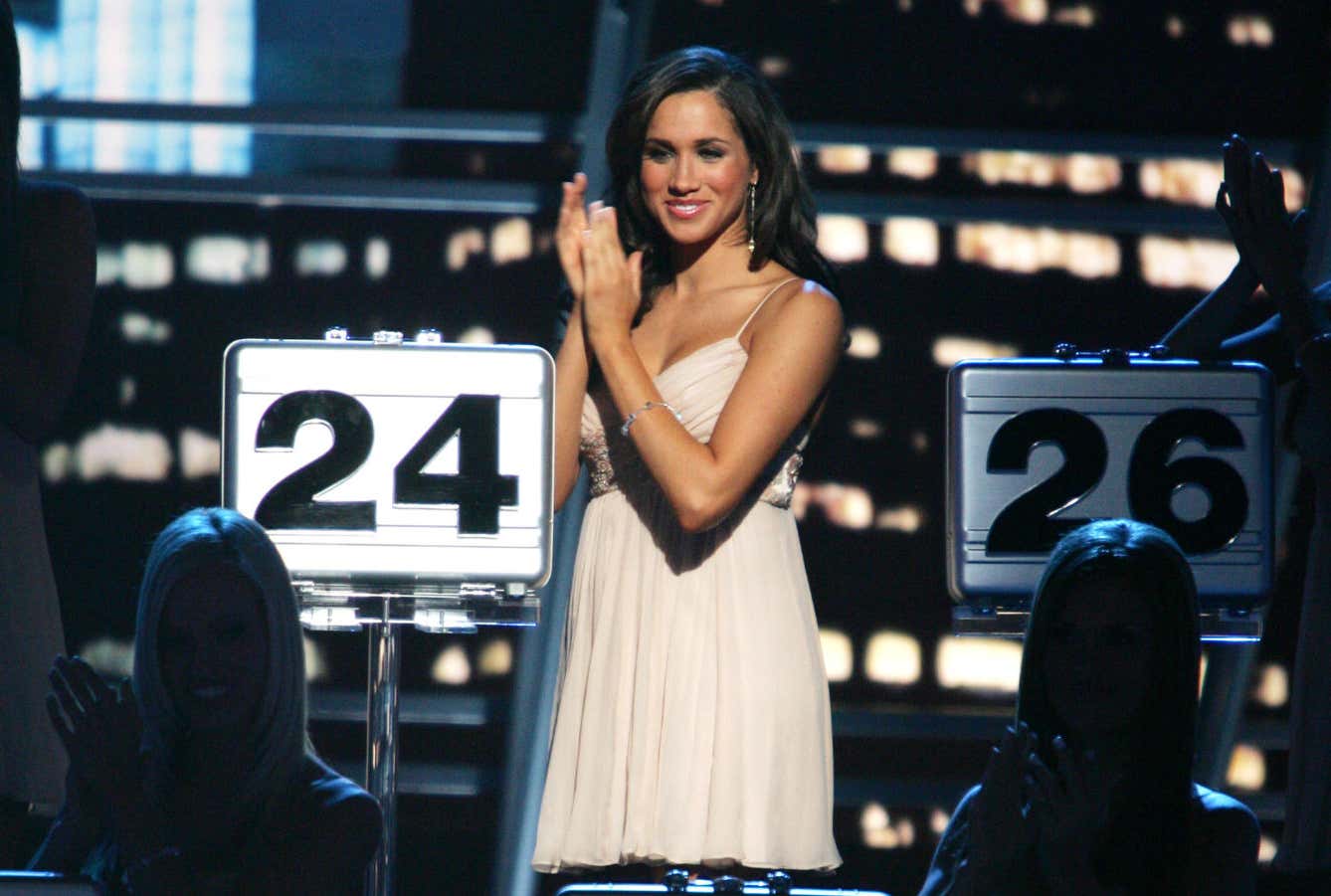 One might be tempted to think that life as a game show model would be pretty sweet. Riding a gravy train with biscuit wheels. Where you get to earn your living doing not much more than to be your super-attractive self, wear dresses designed for you, and smile while waving your hand toward a washer-dryer combination, touch the screen of whichever letter lights up, or hold a briefcase. Especially if that gig eventually led to you marrying into the world's most celebrated royal family.

But you would be wrong. Very, very wrong.

Megan Markle, of course, lived that life. And she's here to tell us, her time on Deal or No Deal was an infernal, dystopian, chthonic, torturous hellscape that made the slaughterhouses in Upton Sinclair's The Jungle look like the Google campus.

If you don't know, Megan has a podcast, where she apparently interviews famous women about female empowerment and smashing the patriarchy or something. But by all accounts, it's really just her turning every conversational thread back around to her. Though I cannot confirm. I'm usually listening to Adam Carolla, Joe Rogan, Dan Carlin, or Barstool podcasts.

Anyway, on this week's show, Markle had on Paris Hilton. And rather than find something interesting in a hotel heiress who turned herself into a worldwide brand and earning a fortune with nothing but sex tape and a vocabulary the size of the ones pediatricians look for in a 3-year-old, she instead turned the conversation about the time she spent doing force labor in Howie Mandel's Dickensian workhouse:

Source - The Duchess of Sussex, 41, reminisced about her “fascinating” experience as a briefcase girl on the “Deal or No Deal” game show. …

Markle said she would be on set for the game show and think back to her time as a college intern at the US Embassy in Argentina, where she was “being valued specifically for my brain.”

“Here, I was being valued for something quite the opposite,” she said about “Deal or No Deal.”

“There was a very cookie-cutter idea of precisely what we should look like,” Markle added, sharing that girls would line up at tapings for different stations where they would put on lashes, get extensions put in or get padding in their bras — and they even received spray tan vouchers every week.”

“It was solely about beauty, and not necessarily about brains,” she said. …

She ended up quitting the show, revealing she was “thankful for the job, but not how it made me feel, which was not smart.”

“I was surrounded by smart women on that stage with me, but that wasn’t the focus of why we were there,” Markle said.

“I would end up leaving with this pit in my stomach, knowing I was so much more than what was being objectified on the stage,” she continued. “I didn’t like feeling forced to be all looks and little substance. And that’s how it felt for me at the time, being reduced to this specific archetype.”

I'll confess that I never watched the show. So I checked some videos. And can confirm it was about beautiful models in pretty dresses holding up suitcases:

Suitcases containing dollar amounts that contestants were try to win. They're not the President's nuclear football. There's not a bomb inside they have to disarm. They're not filled with foam padding custom built to fit a sniper rifle they have to assemble in order to take out a terrorist from the roof of a building. The job was completely, utterly, 100% about looking good on TV. That's the only qualification for the job. And the only requirement once you get hired. And I will argue, Megan Markle performed quite capably in that task.

But what kind of a raging narcissist do you have to be to take that job and then present yourself as a victim because no one was appreciating your genius? How self-possessed to you have to be to get paid to be a game show model, but resent how nobody stopped the show so you could you talk about your days handling diplomatic dispatches at the embassy in Buenos Aires? How hard do you have to believe you are the bright, shining center of the galaxy around which the rest of us orbit to think people want to hear you complain about how you were paid to be good-looking on network TV while your brilliant mind was being ignored? While you're married to a literal prince, living in a mansion next to Oprah, and have a $100 million deal with Netflix? And half the country is living on Ramens and can't afford to heat their houses this winter?

Still, nice humblebrag, Duchess. We're all suitably impressed with your brilliance. I'm sure when those three physicists won the Nobel Prize for demonstrating Bell's Inequality that proved in laboratory experiments the incompatibility between quantum mechanics and classical physics, they only beat you to the punch by a day or so. And none of them look nearly as good in a gown as you.

What an insufferable tool. Reading this gives me newfound respect for Vanna White and Barker's Beauties. They're the real American Royals.