I've started thinking about this - does any fanbase love an individual player like Buffalo does Josh Allen? If so, who? Because he's on the shortlist for sure. I can't think of anyone else where fans go so nuts for one of their own.

Now listen, I get that it's a regular season game and Bills fans will always get roasted for going crazy over a win there, but this is what they are. They are one of the best fanbases in sports. They've suffered through 4 Super Bowl losses in a row. They've suffered through the Music City Miracle and being bad. Now they have this elite quarterback and good team so they are going to go crazy every week. It's why I have a soft spot for them.

Filthy for sure. Street name worthy? Ehh. Not until Pennsylvania Ave. is renamed for Vince Carter dunking over Frederic Weis. That's America, baby.

Back to Josh Allen real quick - uhh, I don't think this is the threat they make it out to be 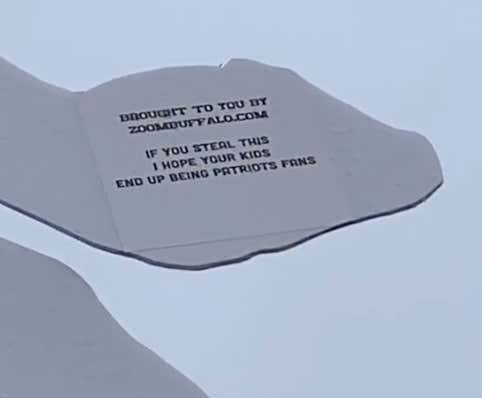 Being a Patriots fan has been pretty fucking awesome the last two decades - and I say that as a Giants fan. At least go with the Jets so it's a real threat. Maybe even the Dolphins. But you can't threaten them by being Pats fans. I get it's a rival and you don't want to deal with that in your house, but it's not intimidating here.

Can't imagine what will happen if Josh Allen gets them to a Super Bowl. City might just change its entire name.