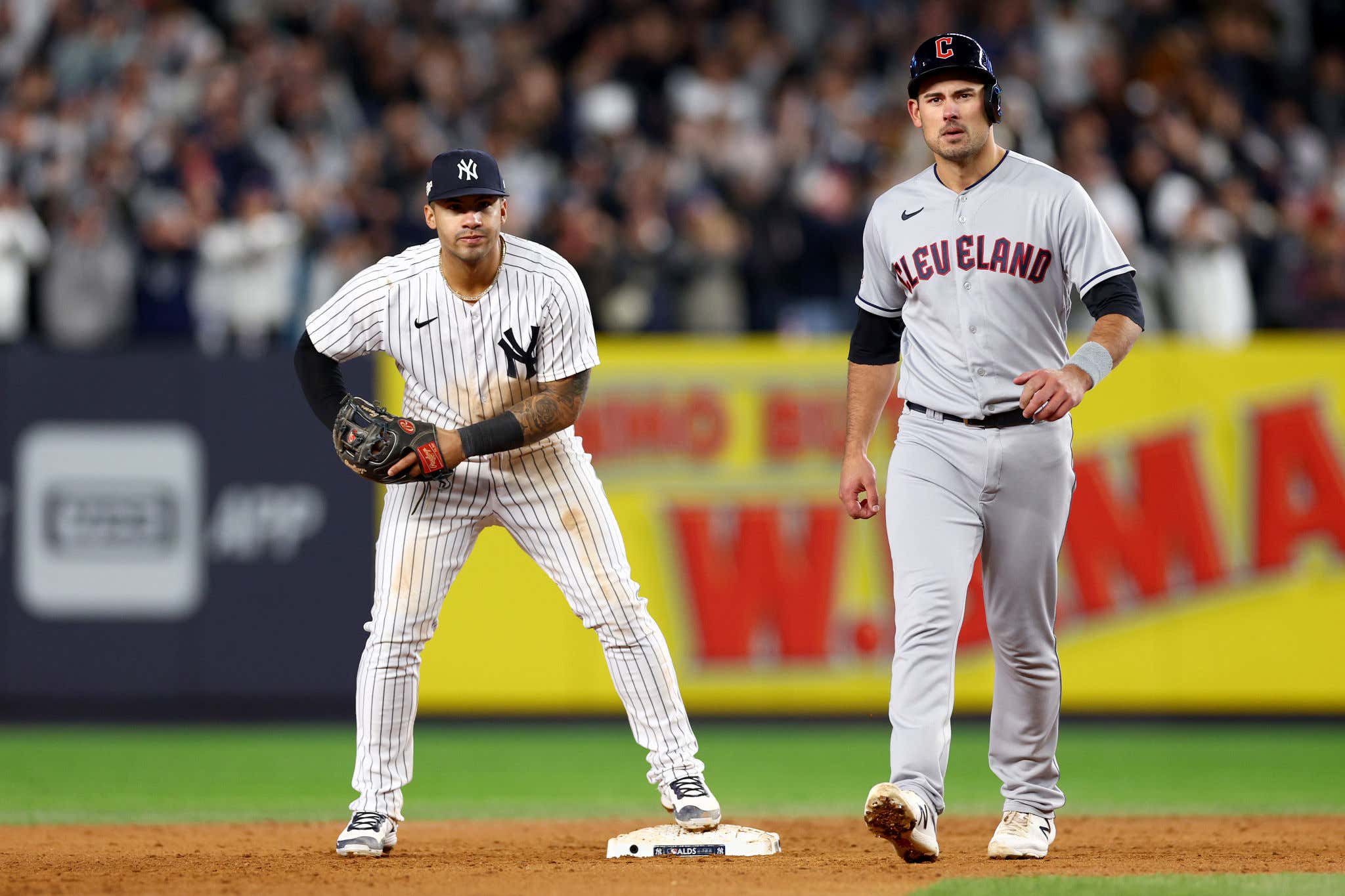 What an absolutely perfect way to put a bow on the ALDS. Eat shit Josh Naylor. Go fuck yourself Myles Straw. Suck my dick Ohio's Tate. Hope you all enjoy the rest of the postseason from the couch.

The Yankees had to start fast in this game with the Guardians gauntlet of a pen well-rested. Allow Civale to go 5 strong and the Yankees would find themselves in hell trying to score. Well, lucky for them Postseason Stanton showed up once again and made a statement.

That's 10 homers for Stanton in his last 15 postseason games. Only human to best that mark is George Herman Ruth with 11. This picture by the way is FIRE

Aaron Judge showed up as well, blasting this solo shot to extend the lead to four.

That gave him the most career homers (4) in MLB history in do or die postseason games.

Nestor Cortes Jr. was fantastic on 3 days rest while the bullpen of Loaisiga+Holmes+Wandy didn't flinch. For the most part the starting rotation and pen were excellent in this series minus a few irregular moments that were brought on because of Boone. Gerrit Cole came through in the biggest of ways in Games 1 and 4. Harrison Bader blasted three homers in the five games and gave the Yankees life at the bottom of the order they've desperately been seeking. Rizzo came up with clutch hit after clutch hit. They easily could have crumbled and folded after Game 3's disaster of a loss. Instead they bounced back with incredible resiliency, jumping out in front of Games 4 and 5 to ensure they would be in the driver's seat.

Gleyber hitting them with the rock the baby as the final out was secured was so perfect. One more time for the people at home.

What an unbelievably stupid celebration by Naylor in Game 4 as they were still losing. It was at that very moment the Guardians lost all hope of winning this series. At the end of the day a franchise that calls themselves the 'Guardos' was never going to beat the Yankees. Boone and IKF made it more difficult than it should have been, but the better team prevailed.

Now it's onto Houston for the trilogy episode of this ongoing war. It ain't gonna be easy in the slightest, especially with the quick turnaround. Game 1 is already tomorrow night where Justin Verlander will be waiting. They kicked the Yankees' ass in the regular season, but the postseason is a whole different monster. The Yankees enter with momentum and confidence, let's hope it gives them that extra jolt they need to vanquish their demons.

Roster wise, Aaron Hicks is done. Oswald Peraza needs to find his way onto this roster along with Ron Marinaccio and maybe DJ LeMahieu. Frankie Montas might also be in the mix, but I lean that he won't be. Andrew Benintendi has already been ruled out which hurts. Some big decisions to be made but at least they have to be made because the Yankees are moving on to the ALCS.

To Houston we go.

P.S. I hate that I kinda love Naylor's response here