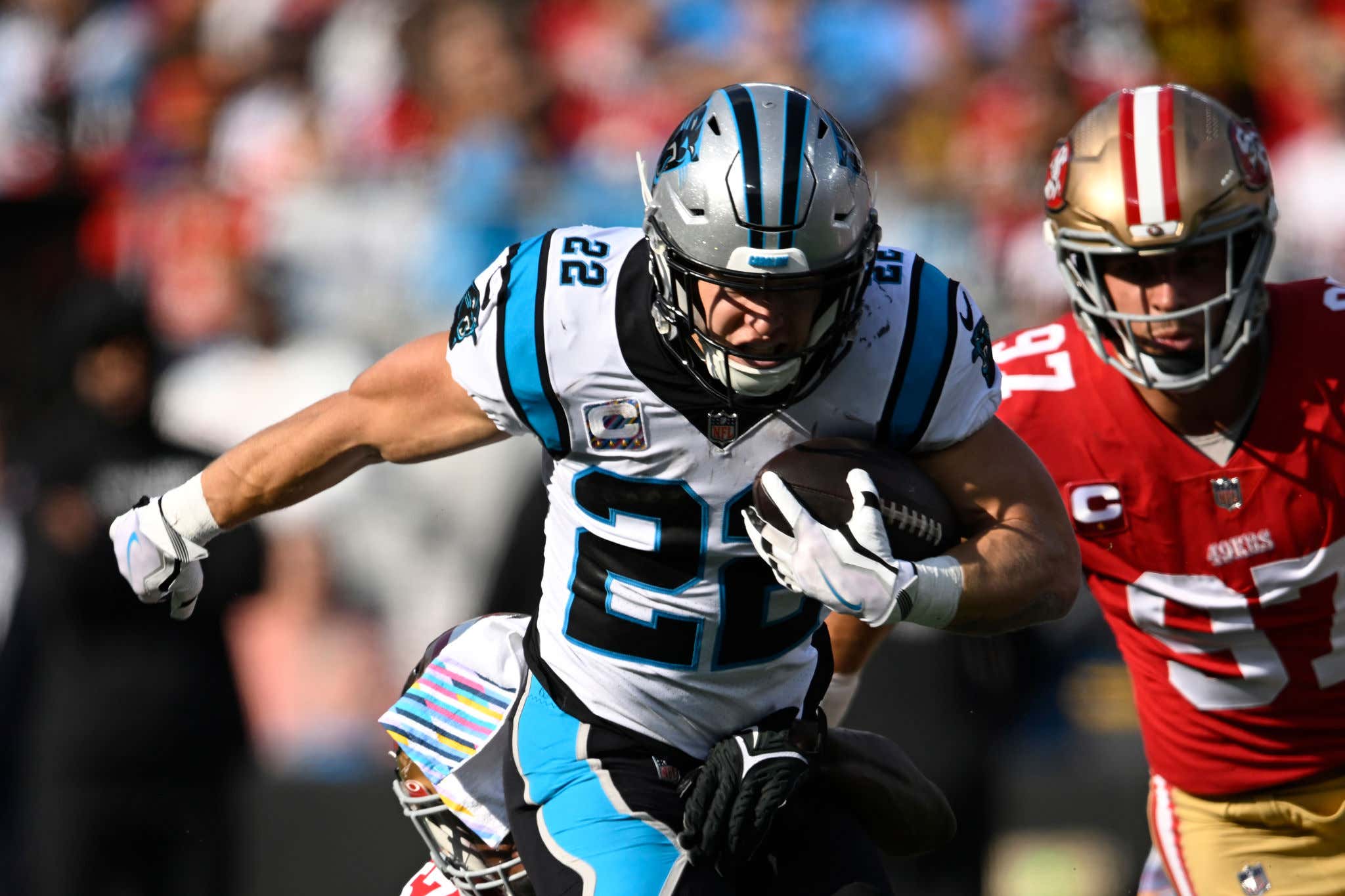 So uh…might I have a personal stake in Christian McCaffrey getting traded to another team to improve the chances of hitting his season-long rushing yards Over given the current, dire state of the Carolina Panthers?

I might. More than that, though, McCaffrey is as healthy as he's been in probably three years. He is actually still somehow 13th in the NFL in rushing yards despite how atrocious the quarterback play has been in Carolina. As a lover of quality offensive football, someone who's as dynamic of a playmaker as McCaffrey is deserves a better situation to thrive in. Not Ben Fucking McAdoo and PJ Fucking Walker as his play-caller/QB combo.

So among these five trade destinations, I'll start with more of a sentimental landing spot for McCaffrey on a franchise who's in desperate need of him, followed by four teams who have varyingly realistic chances of contending for a Super Bowl.

So I just spoke of how brutal McCaffrey's OC/QB tandem is with the Panthers. I'm not sure the Denver Broncos' Nathaniel Hackett and Russell Wilson are much better. However, it'd be so dope to see McCaffrey return to this home state of Colorado and play for the same franchise his father, Ed, was a star wide receiver for.

The elder McCaffrey was on both those twilight John Elway championship teams. An AFC West division already loaded with talent would welcome another blue-chip player in CMac. Plus, Javonte Williams is out for the year with a knee injury, and the guy who got the most carries for Denver on Monday night was Latavius Murray. He was just signed off the Saints' practice squad.

Pretty safe to say McCaffrey is an upgrade from Murray, and the Broncos' Week 9 bye falls right during the NFL trade deadline of November 1st. Pretty ideal. Denver is projected to have over $32 million in cap space for 2023, too.

I'm speaking of course about the San Francisco 49ers. They are paper-thin in the backfield right now due to Elijah Mitchell's injury. Speaking as someone who drafted him and has had to deploy Jeff Wilson as a fantasy tailback, he ain't quite hacking it.

Can only imagine the creative play designs Kyle Shanahan could come up with if McCaffrey entered the fold. Although McCaffrey's minimal cap hit for this season goes up exponentially in 2023, the 49ers are in a position to handle it. They'll no longer be paying Jimmy Garoppolo, and Trey Lance will still be on his rookie contract.

Giving Jimmy G (this year) and Lance (next year) a back who can give them virtually guaranteed completions and open up the offense more for Deebo Samuel, Brandon Aiyuk and George Kittle seems like a no-brainer move. If Carolina has to trade McCaffrey within the NFC, better to send him to the opposite coast than in division.

How about the Bucs giving Tom Brady a James White 3.0?

The Tampa Bay Buccaneers rank DFL in rushing yards per game. Some of that is abandoning the run too soon. Some of it is a suspect, banged-up offensive line. Some of it is lack of quality depth behind Leonard Fournette.

Recently retired ex-Patriot James White was among the most lethal third-down running backs ever. He was a favorite of Tom Brady's in New England for critical conversions. Brady has brought some of his preferred play designs to Tampa from Foxborough, and if there's any pass-catching back who could pick up those concepts on the fly, with an all-in, do-or-die championship culture to support him, I suspect it'd be McCaffrey.

Given that Brady is in his age-45 season and could be finished playing at the end of the year, there's literally no reason for Tampa Bay not to give up a valuable draft pick to land someone of McCaffrey's caliber. If it takes sweetening the offer to poach McCaffrey from an NFC South adversary, so be it.

I don't mean any disrespect to White by labelling McCaffrey as a 3.0 version of him. Not White's fault his role was highly situational and not as much about running the ball. Still, CMac's talent level is elite, and his complete-package skill set would transform the Bucs' floundering rushing attack and their entire offense.

I've taken a keen interest in the Miami Dolphins because I'm a TuAnon truther and an ardent Mike McDaniel supporter. They're on a three-game losing streak since Tua Tagovailoa went down. He's coming back this Sunday night. Miami was aggressive in not only acquiring Tyreek this offseason, but also in maneuvering in the draft to land Waddle.

Seems like GM Chris Grier recognizes the importance of skill position firepower in the modern NFL. Give McDaniel someone like McCaffrey to work with, and the results should be tremendous. McDaniel loves to use pre-snap motion as much as anyone, and given McCaffrey's receiving prowess, defenses would have a hell of a time trying to diagnose what the hell the Fins are doing on any given play. If I were an opponent, I'd also fear two-back sets more with McCaffrey and Raheem Mostert as opposed to Mostert and Chase Edmonds, no offense to the latter.

Like Trey Lance in San Francisco, Tua isn't due a second contract yet, so the Dolphins can take on McCaffrey's deal into next season with little issue.

Circling back to the NFC West, and here's a little more fuel to add to the fire linking McCaffrey to the Niners and Rams, via a report by ESPN insider Jeremy Fowler:

"A significant footnote: The Panthers restructured McCaffrey's contract in March, pushing his base salary to around the minimum. That means a team acquiring McCaffrey would owe him a prorated version of $1.12 million this year. His contract becomes more complicated in 2023, with a salary of $11.8 million, which is not guaranteed.

"That could be problematic for a team such as Buffalo, which wants to keep its cap outlook clean for next year due to many top-dollar players on the payroll. But if a team is looking for a one-year rental to catalyze a championship offense, McCaffrey might be the best bet. At the least, Buffalo and others would love to have McCaffrey's skill in their backfields. The Rams and San Francisco 49ers have been implicated in McCaffrey's market, too."

Les Snead could not care less about draft picks. We've seen it time and again. I wouldn't be surprised if the Rams tried to acquire an offensive lineman and McCaffrey around the trade deadline. They probably would've traded for OBJ last year if Cleveland hadn't released him, and they rented Von Miller for a half-season for a second-round pick.

Not sure what it'd take to land McCaffrey. All I know is, if Sean McVay could get someone like him to give Matthew Stafford a safety outlet on obvious passing downs, it'd really help out LA's hapless offensive line that is just decimated by injuries.

The opportunity to play in a big market like Los Angeles would have to appeal to McCaffrey. He has plenty of fans out in California after starring at Stanford. Another wrinkle: In a hypothetical trade, the Rams could send back their own disgruntled ball-carrier in Cam Akers. If it's a fresh start and a strong workload Akers desires, he'd be the No. 1 back in Carolina with CMac out of the picture. The downside is Akers would have to weather the rest of a brutal 2022 Panthers campaign and a coaching staff change.

Akers or no Akers, the Rams could and should — and knowing them, will — find a way to trade for Christian McCaffrey.

Sound off in the comments as to where you'd prefer McCaffrey to be traded to, or if you have a different team I didn't list here. I will say, the Buffalo Bills don't strike me as an obvious landing spot. They already have Devin Singletary, a rookie second-round pick in James Cook and Zack Moss, plus Josh Allen as a huge component of the running game.

Another new report I've seen doesn't make it sound like the Bills would outbid a more desperate team, either:

Combine the above with Fowler's tidbit about Buffalo from earlier in this subsection, and there you go, hence why I've excluded the Bills from my list.

So before you say, "YEEEUH MEEEAAAAN YOUR LIST LOST ALL CREDIBILITY WHEN I SKIMMED THROUGH IT AND DIDN'T SEE THE BILLS ON HERE YOUR [sic] SUCH AN IDIOT HOW DO YOU WRITE FOR BARSTOOL YOU SUUUUCK" maybe read this bit. And then still go off if you must. I guess.

I'd rank the destinations by my own personal preference as follows: