When an athlete does something that should be common in a different way it often becomes a spectacle. Regardless of stats or winning percentages, when it’s done differently we as fans become enamored in seeing that athlete do more of the common thing that he or she is doing. We want to believe that no other athlete has ever done this before and we are the first generation to witness such greatness. Prisoners of the moment. We are apart of a generation that refuses to believe that this could have happened before. There will never be another MJ… enter LeBron James. Nobody has ever hit home runs like Barry Bonds…Aaron Judge is that you? Steph Curry invented the 3 point shot (he is the greatest shooter ever) but Reggie Miller still lives. Which brings me to my unsolicited point. Cooper Kupp has turned heads and made waves in the NFL. He has put the entire league on notice that the wide receiver position must go through him. And people seem shocked. Which got me to thinking (happens more than you all think) who was Cooper Kupp before Cooper Kupp? The athletic and electric WHITE skill player with speed, agility and dominance at the skill position? These white skill position players in the NFL were in their bag before Kupp was in diapers! 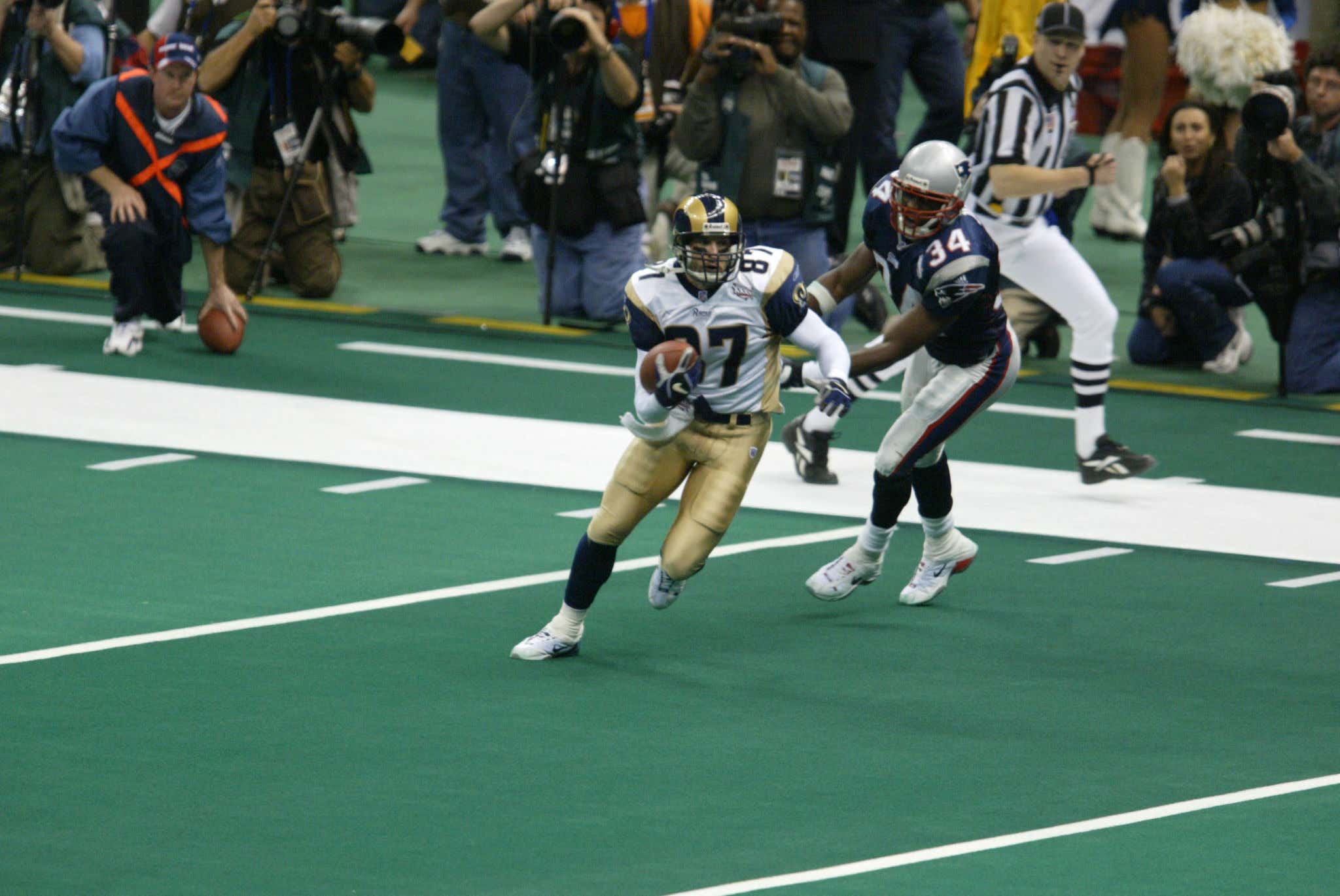 Imagine Cuban Gooding Jr yelling “RICKYYYYYY” and you probably imagine the great actor Morris Chestnut running from his unfortunate demise in the cinematic masterpiece “Boys in the hood”. Now imagine how many times NFL announcers had to yell those exact words in regards to Ricky Proehl. Proehl who was part of one of the greatest scoring offenses in the history of the NFL (The show me state Rams) scored 54 touchdowns in his career while amassing close to 9,000 receiving yards. Ricky was not a just a person on the filed, he was a PROBLEM! Known for crisp route running and his ability to remain healthy while playing in an extremely physical league, Proehl would easily be one of the better receivers in todays league based on stats and prisoner, sorry I mean “fans” standards. He was also apart of the reason the NFL hated team celebrations, now lets Bob and weave! 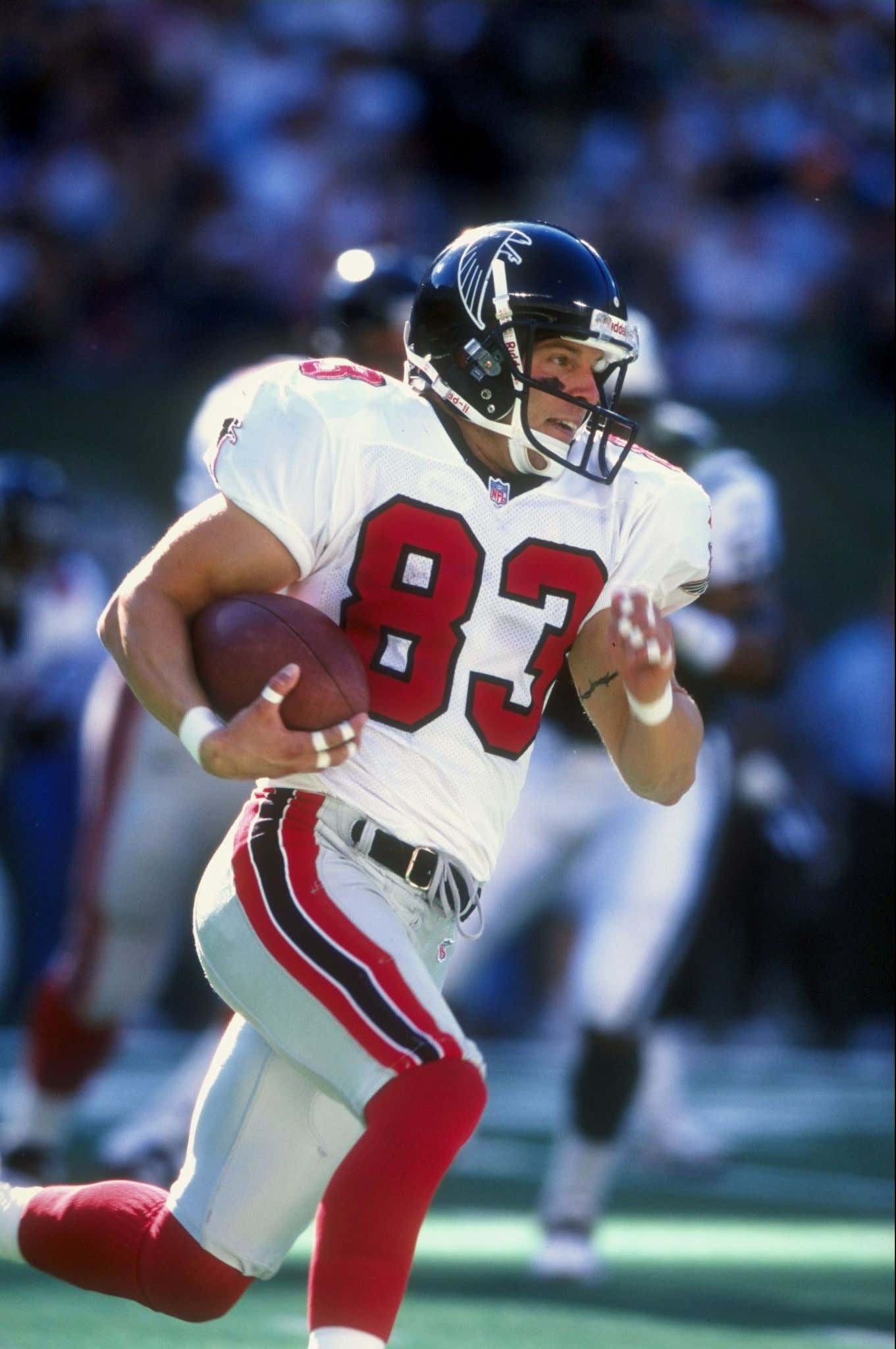 Some players are known for their stats, awards and Super Bowl championships. Then there are some players that don’t get to reach the Mount Everest of statistical peaks but are so profound and amazing at their craft that their legacy is cemented into the minds of fans. If Tavon Austin was white he would be Tim Dwight. One of the most elusive, quick hipped kick/punt returners to ever play the game. To call him lightening in a bottle would be to call him slow. Although his receiving stats aren’t up to par with some of the middle of the road receivers, Dwight was a game changer waiting to happen. Back when kickoffs were real and teams used the Flying V (shameless mighty duck reference) Tim Dwight averaged 42 yards per kick return in a Super Bowl which would flip the field in todays game and did I not mention that he returned a kickoff 94 yards in a Super Bowl! Tim Dwight highlights He wasn’t fast for a white guy, HE WAS JUST FAST! 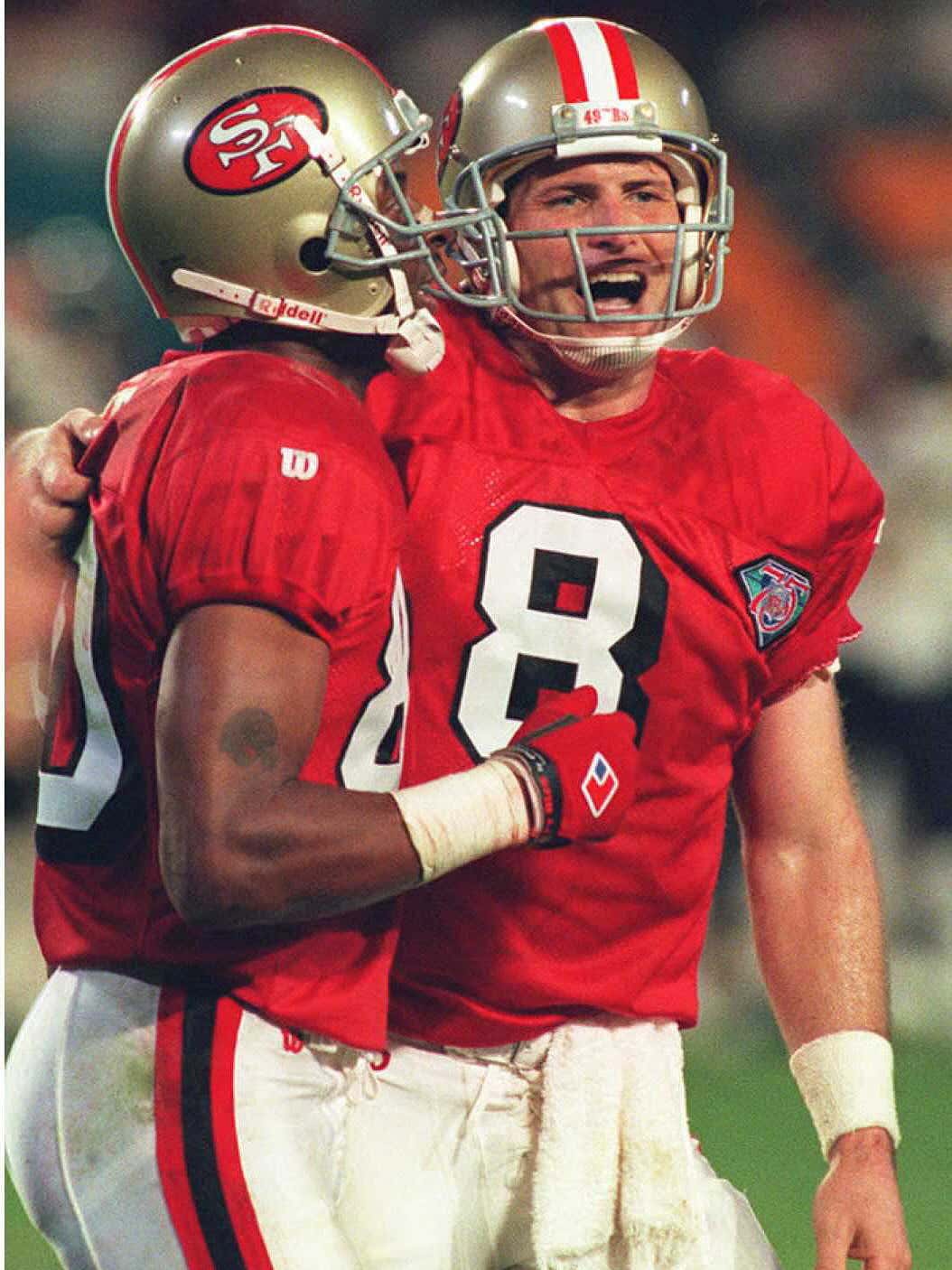 Children that haven’t even been thought of yet probably know about Steve Young. The left hand gun slinger. Super Bowl champion, 232 career touchdowns thrown and blah blah blah. I want to focus on the rushing ability of Steve Young. Today Lamar Jackson is putting defenders in ice skates in the middle of ponds frozen in Florida (that means thin ice). When a QB is considered dual threat I am pretty sure Mike Vick, the aforementioned Jackson or Cam Newton comes to mind. Josh Allen is tearing the league up at the moment with his arm and legs but folks are acting like they’ve never seen this before. Cough cough, Steve young rushed for 4,200 yards during his career with 43 rushing touchdowns all while having access to the greatest WR in NFL history not named Randy Moss. Targeting didn’t exist. A concussion protocol was being able to finish the sentence “I love you and you love…”. Steve young ran circles around defenders. The term backyard football is often said by tweeters and if the term existed back in the 90’s then Steve Young made the field his back yard front yard and drive way. It’s a bird, no it’s a plane, no it’s a left handed white man running towards you about to embarrass you in front of your friends and family. 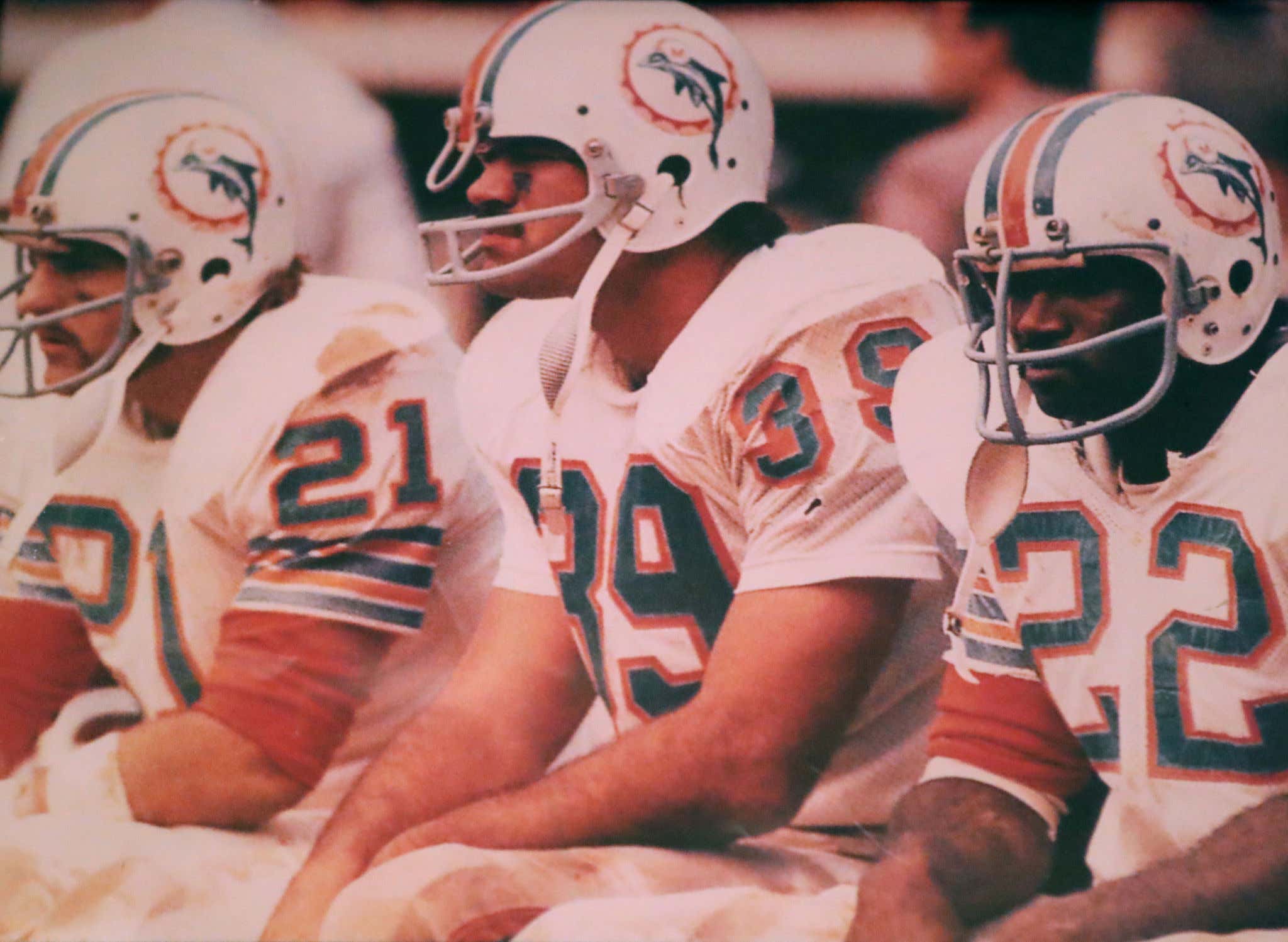 Hey Kids you ever heard of the 1972 dolphins? The only team in NFL history to fully complete an entire season without a loss? Guess who was the most feared running back in the NFL? THIS GUY! In a league where being a white running back is the equivalent to being a black male in hockey player (rare) Christian McCaffrey (when healthy) is cold as a gold digger shoulder when a broke guy approaches, word to J Cole. But he’s looked at as an anomaly. Allow me to reintroduce you to Larry Csonka. Larry Csonka rushed for 8,000 yards with 64 touchdowns in 11 seasons in the NFL, not to include the fact that he missed multiple games due to concussions and head injuries. Having your name mentioned with greats is one thing but having your jersey retired is a whole different status symbol. Larry was Mike Alstott before Mike was Mike. Larry would be Derick Henry today, but more violent. He was beast mode on steroids. Larry was the guy you picked first and made him captain after picking him. Power, speed and finesse and let’s not forget to include that Larry also caught 106 passes for 820 yards. Larry was getting busy and doing em dirty!

Trust me I understand how cool it is when things happen to you, around you and during your era. You want to lay claim to being the first and celebrating your teams victory like never before. Sorry to be the one to burst your bubble but the simple truth is that there’s nothing new under the sun or above the stars.

Seriously, White men always could jump, you've just been calling it crafty, gritty, high motor or sneaky fast. We’ve seen this before, stop being a prisoner of the moment.

For more comedy, insight and things you may or may not care about, be sure to follow me on all social media @joshpray