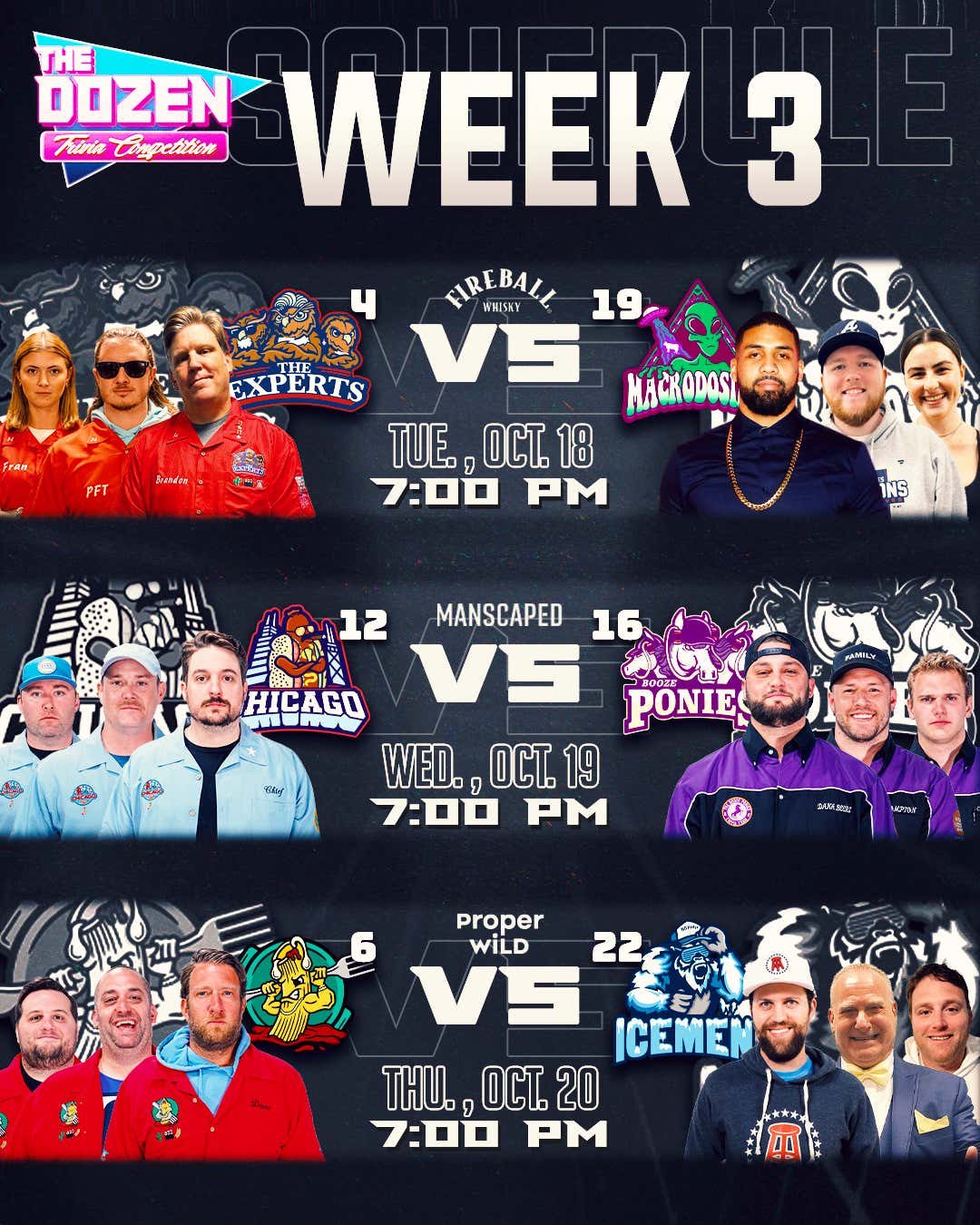 The Dozen Season 3 is back tonight as Brandon Walker makes his Season 3 debut.

Last week was a tough start for new teams on The Dozen as they fell to 0-2-0, with OG teams 2-Team Minihane and 6-Gen XYZ opening up with wins, as well as a win for Season 2 regular season darlings 9-urMom. This week, we have heavyweights making their Season 3 debut with Brandon Walker's return, Dave Portnoy, and Chicago all getting in on the fun. Our correspondent Scoops L'Aguirre has the breakdown…

--
The Dozen Week 3 is here, and with it, we get the season debuts of three of Barstool’s greatest athletes: Arian Foster, Will Compton, and Stu Feiner. Three classic teams will take on three expansion/newer teams this week, and there is no better way for a new team to establish itself than by taking down a known contender.

5-THE EXPERTS vs. 19-MACRODOSING

Brandon makes his Season 3 debut after missing the Philly tournament, where his replacement happened to Big T. Big T did not impress much during his Philly performance; meanwhile, Arian & Mad Dog have never played before. Expectations for Macrodosing are low, and The Experts are clear favorites.

However, Macrodosing has two things going for them. First, The Experts always play to the level of their opponents, where they have beaten teams like The Frankettes & The Yak yet have also put up record-breaking low-scoring games against a team like The Troops last season. Second, The Dozen is a game about who knows a bunch of weird knowledge, and thus, Macrodosing should be a perfect fit for this type of show.

Chicago must feel disrespected opening the season ranked 11th when they carried The Crown for most of last season. However, it indicates how The Dozen fans view cheating, where this team, who was once guaranteed to be a Top 10 rank regardless of winning/losing, is now on the outside because White Sox Dave could not stop himself from googling answers. Them being 0-3 in live show appearances is a real stink on them as well.

Then you have the Booze Ponies, a loud team with a massive fan-backing where the only question is, are they any good at trivia? Their single win last season came with RDT filling in for Will Compton, and they lost their other two games. Dana Beers has some NBA & CBB knowledge, Will has played with or against most NFL/CFB answers, and Donny knows Food. Can they get lucky?

So, Why Isn't Ziti Ranked Higher?

After their Final Four run last season, Ziti finally has respect on their name. Since 2022, Ziti’s compiled a 4-1 record when Dave plays, and mowed down quality opponents in The Yak, Frankettes, Honkers, and urMom. The fact they have keyed on Food/Snacks as their Niche/Doubled categories have been massive for them.

There is no other way to put it… The Icemen consisting of Nate, Elio, and Stu Feiner, will be a fucking mess. There is a chance they are a decent team; Stu and Elio are heavy gamblers, which may translate to some obscure trivia pulls. Nate is reliable for a few points a game, and he always knows the answers of

his opponents after they get them right, which has to count for something. This team will either be terrible or excellent, and there will be no in-between.

For maybe the first time, Ziti will be heavily favorited going into a game. Life changes when you are at the top. Who knows? Stu might be a secret ringer as he’s lived many lives; he could Slumdog Millionaire his way to a victory. Like & Subscribe!

--
Make sure to check out our merch…