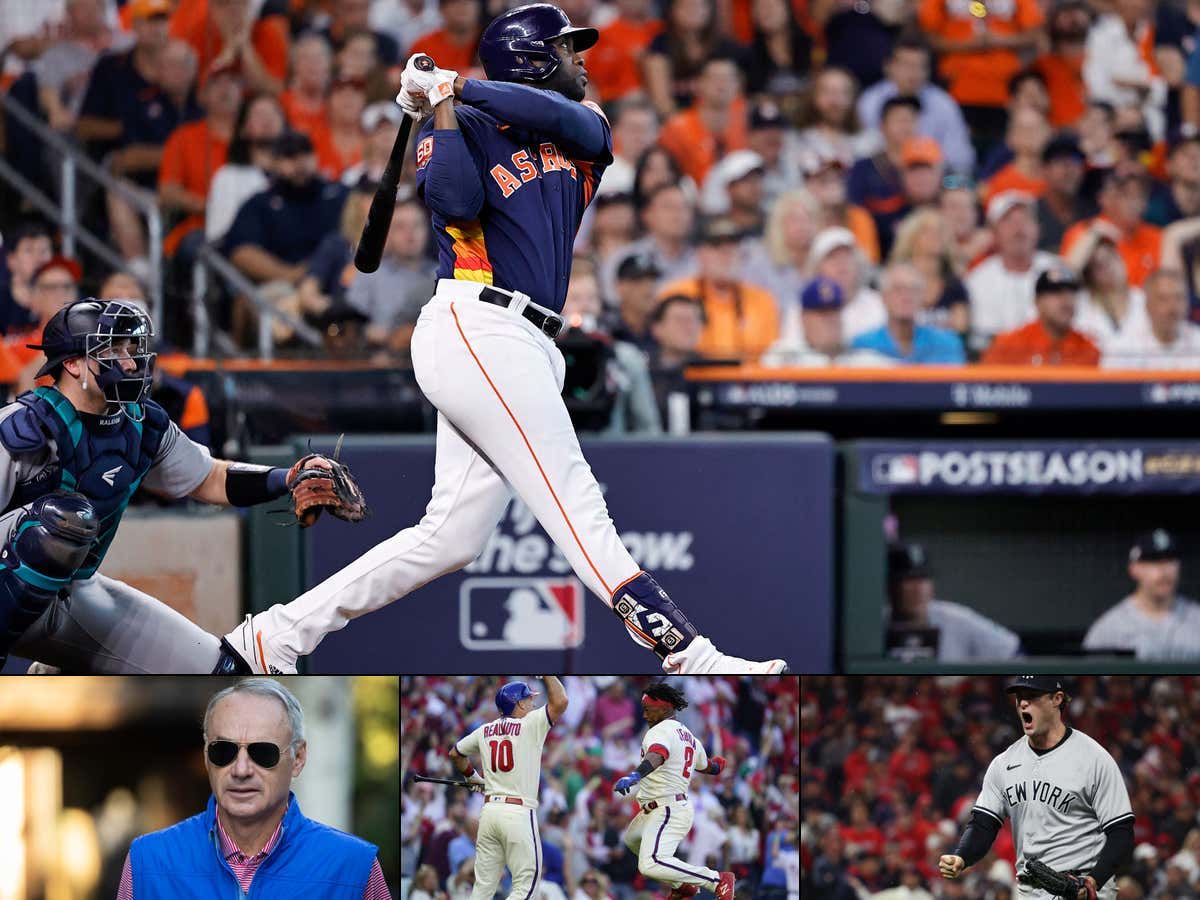 I can't speak for everyone, but it's been the best start to any MLB playoffs of my life. There's some monster series across history, but the collective body of work through the first 24 games this year is nothing short of remarkable.

- Another 7 games have been decided by 2 runs including the 1st, 3rd and 4th game of the Dodgers/Padres NLDS as well as the Phillies/Cardinals WC elimination game.

- The Guardians and Yankees have played 2 games this ALDS where the home team held a 1-game series advantage. Both times the road team won by 2 to even the series.

- With it, average is still around 2.5 runs per game

- Offense is around 7.4 runs per game which is much higher than what the hit/strikeout totals suggest

I don't know who gets the credit, but somebody deserves it. The 12-team format has been categorically refreshing and that's coming from a man constantly in seek of refreshments. Rob Manfred is annihilating my high standards.

But is he responsible for the new playoff format? 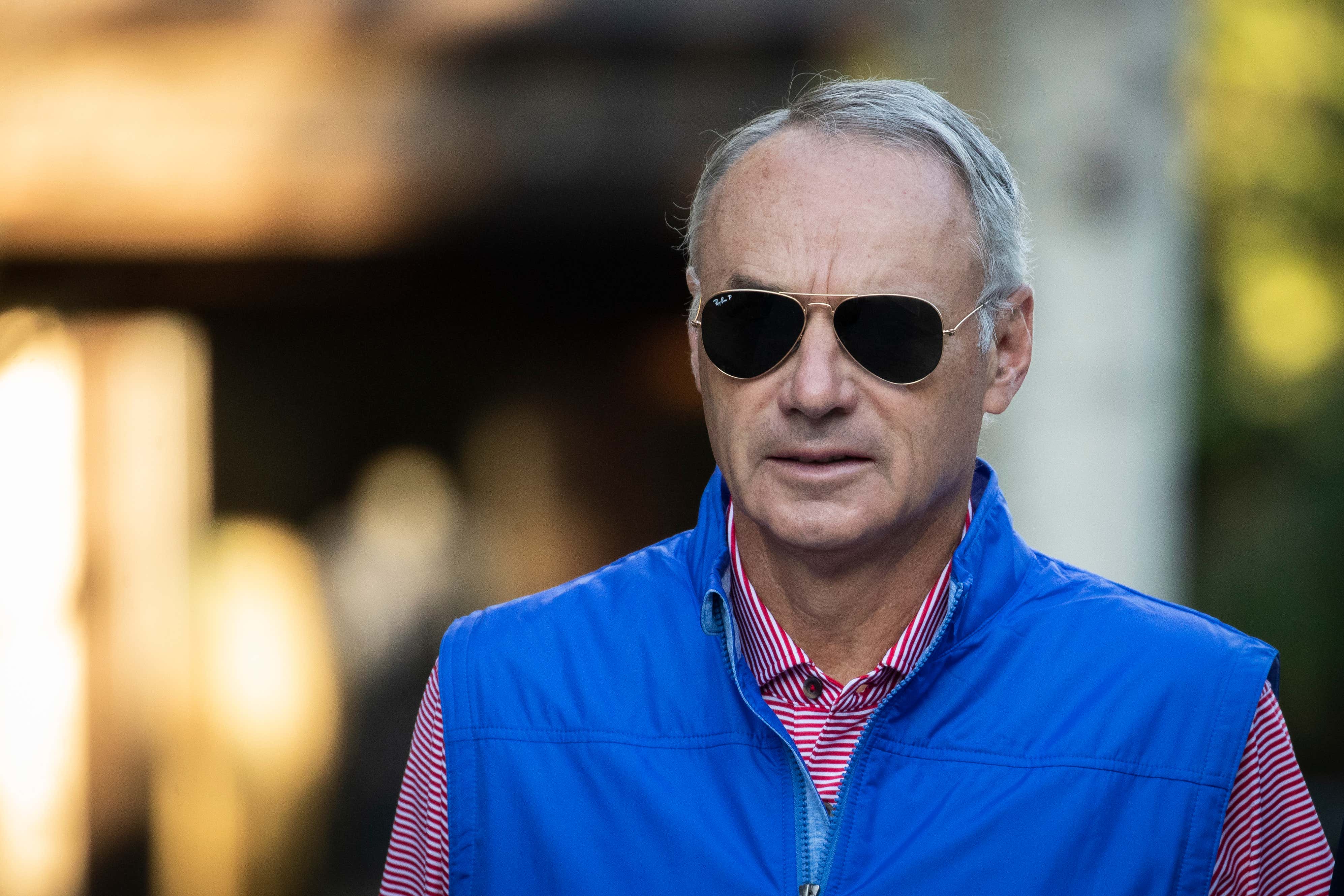 But we also know Theo Epstein has spent the last couple years brainstorming at MLB HQ. I think his unofficial title is Director Of Thinking For The Fans and it sure seems like he'd be involved in the new format.

Whatever the case, it feels great to finally see MLB get something/anything right. We needed this bad coming off that bullshit lockout and all the stupid drama.

So with all that, here are my top moments of the 2022 playoffs. It's in modified chronological order and presented without personal bias:

9. Cardinals choke away game 1 to the Phillies: What happened to Ryan Helsley out there? One second the Cards are cruising right along and next thing you know the Phillies hang 6 all because the bullpen exploded. It was a tough watch and that's putting it lightly.

Sucks to see a division champ go down like such a wet bag of shit. But it also sparked the Phillies into this dominant run where they look unbeatable. Who knows what happens if the Cardinals hang on to the first game.

8. Guardians Walk Off The Rays In 15 Innings: I understand not everyone wants 0-0 playoff baseball in the 15th inning, but you can't deny the mounting drama.

Legendary moment no doubt about it. Rookie Oscar Gonzalez has exploded onto the playoff scene and that's a major takeaway moving forward.

But bigger picture - this is the best pitched game I can ever remember. Not a story of two bad offenses failing to show up but rather two dominant pitching staffs and defenses that keep runs off the board.

Now a week later, you see how well that style competes against the Yankees meaning this WC matchup wasn't the waste of time everyone suggested.

Also - the 11am central game times were (chef's kiss) just perfect. Playoff games are way better during the day and that's not up for debate.

7. Blue Jays Blow 8-1 Lead: Hate to be mean again but you can't blow an 8-1 lead and get a positive spin from me. The Blue Jays straight up choked away a massive lead at home in an elimination game. You can't hide from this box score: 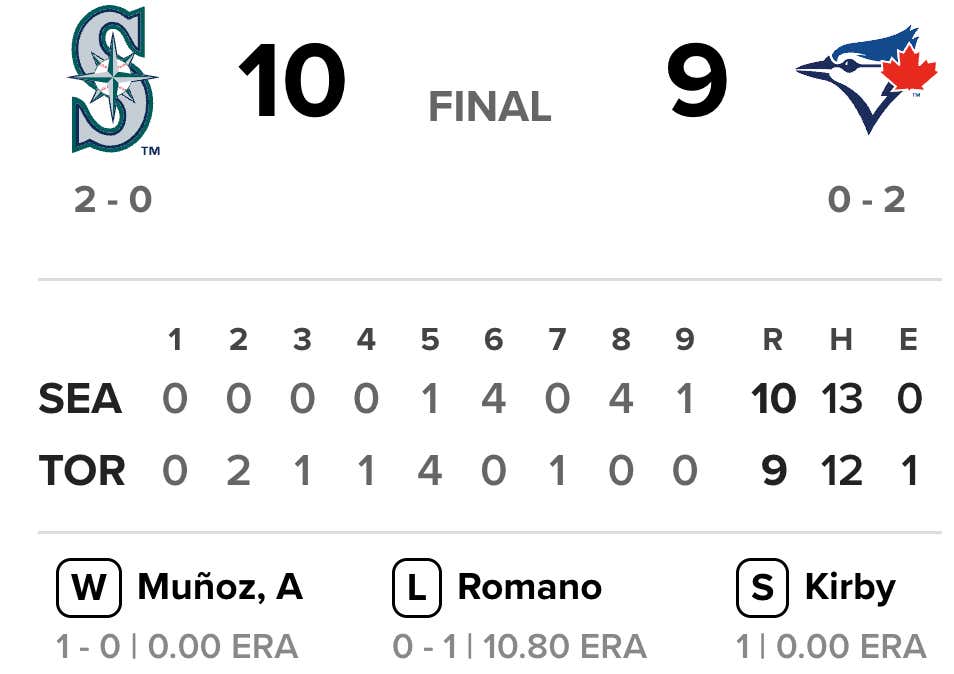 I will now concede that a Mariners blooper led to a major outfield collision that cleared the bases and tied the game in the 9th. The Blue Jays certainly endured their fair share of bad luck. But that shouldn't diminish the Mariners' resilience.

End of the day, the Mariners went into Toronto and took care of business.

And in the process, I think they killed Anthony Bass… 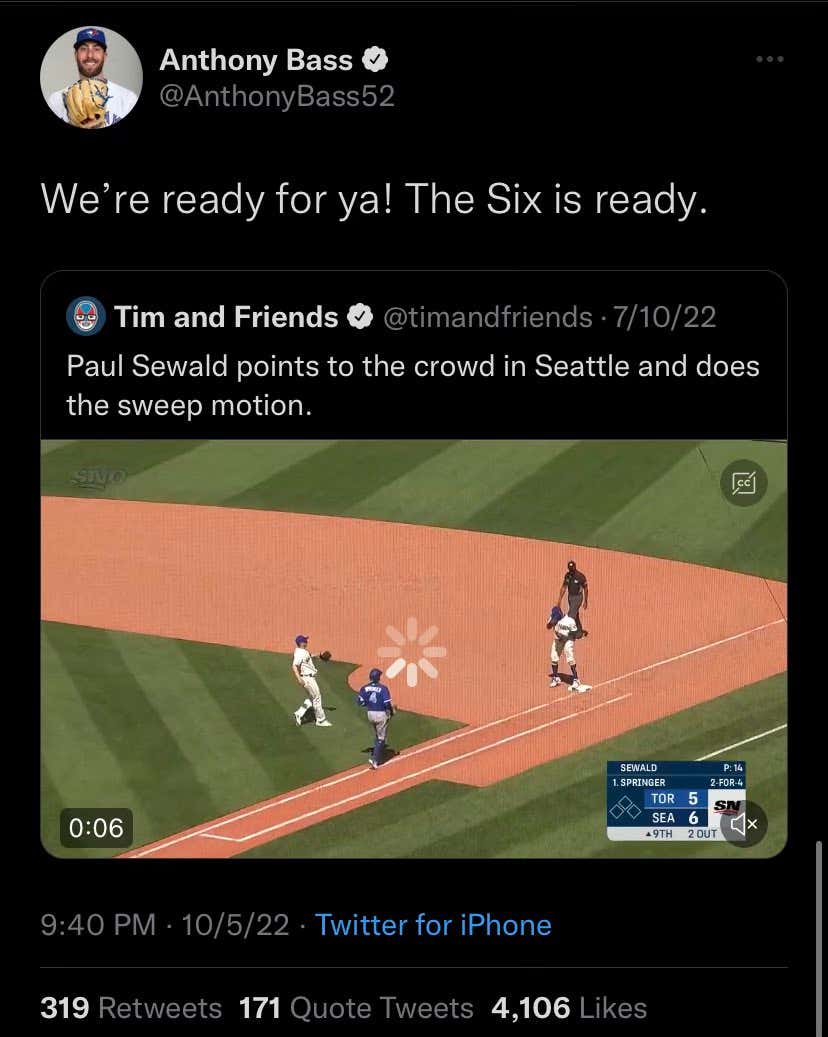 6. Joe Musgrove Shoves? You're so good the opposing team has to stop the game and accuse you of cheating.

Less than 24 hours later and it's an all out war on Joe Musgrove's performance.

We got watch dogs…

Just an unbelievable saga and a seemingly perfect bow to an objectively chaotic 2022 Mets season. From the highest of highs to the lowest of lows. This is how it ended for the Mets and that absolutely fucking blows.

Bright side is Steve Cohen has another couple hundred million to burn.

5. Mariners/Astros: The most competitive sweep in October history had several huge moments including the only walk-off HR down 2+ runs ever:

Should Robbie Ray have been in that game? I say yes but that's before consulting the emotions of Mariners' fans.

Then he did it again game 2:

Nobody is surprised the Astros move on. Blah blah blah. They're so good and all that bullshit.

But the Mariners won me over. A lot of people would say the same. They return the entire pitching staff and all their key contributors. Jerry Dipoto got his feet wet last offseason with Robbie Ray then again with the J-Rod extension. So needless to say the storm is brewing in Seattle. Even getting swept - they've got a ton of momentum going into next year and that shit absolutely matters.

I like Spencer Strider a lot. Anyone who listens to Starting 9 knows this is a simple fact. He's quite literally one of the best young power pitchers to break into the show. Fastest to 200 strikeouts. Nasty fastball with video game hit-strikeout ratios. Just got paid to be at the top of the rotation for another 6 years and the exact kinda stuff you send to an elimination game against a division rival.

And the Phillies shelled him.

The Phillies don't give a fuck how good Spencer Strider is. They didn't care that he looked unhittable in the first two innings and they certainly didn't care that everyone picked the Braves to win. The Phillies have been Red Hot for literally MONTHS now and this was their break out moment of October to remind everyone this isn't a cute story. It's a very good baseball team and you'd be stupid to think of them otherwise.

Also worth pointing out that Bryce Harper is BY FAR the MVP of the 2022 Playoffs so far:

Comments made about the Mets but unfortunate nonetheless

3. Padres Stun The World: No joke I thought this would be a combined 30-5 score in favor of the Dodgers in just 3 games. No way the Padres had the steam to go from NY back West to take on the 111-win Dodgers. So when Clevinger was getting shelled, it all seemed normal.

Then the Padres outscored the Dodgers 15-7 over the next 3.5 games and never looked back. Electric moments from everyone up and down the lineup. Leadership from Machado. Selfless approach from Soto. Grisham and Profar doing damage in the 7-8 spots. Croneworth breaking out from a 2-20 start to the playoffs.

Then you just have nails across the bullpen despite that being their single biggest question mark going into the playoffs.

Hader was outstanding in the DS converting 3 saves in all 3 appearances over 3.1 innings of work with 6 strikeouts against 1 hit and 0 walks.

Small sample size sure. But this is why they traded for him and at this point you can throw out all the 2nd half bullshit. Josh Hader has arrived in San Diego and he's magnificent.

2. Guardians Score 3 in the 9th: The Yankees and Guardians are going the distance and as such they get two entries here. The first is for the ridiculous comeback the Guardians made on Saturday night in the 9th inning.

Yankees held a 2-0 lead in the 2nd game and it seemed like the series was over. Then the Guards come back only to fall behind again in game 3 for yet another insurmountable lead. Then they come back and grind out another impossible win to take a series lead and scare the absolute shit out of Yankees fans everywhere. People calling for Cashman's job and saying to rebuild from scratch with a dependable bullpen. Some of that's a stretch but you get the point. The Guardians simply won't die and it's been a fantastic match up.

And at this point, it would appear nothing is slowing down Gerrit Cole. Not even Josh Naylor talking an unfathomable amount of shit around the bases last night:

Leading to an A+ answer following the game

That's outstanding but everyone knows he can get to another level. If the Yankees advance tonight then that means game 2 against the Astros on Friday night. And if that happens, I don't think anybody would be surprised to see him go 1-hit over 8 innings with 14 strikeouts. He looks that good.

Will the Guardians get in the way one more time?

My brain says No but this postseason says otherwise.