There's an electric feeling in the air of Knoxville, especially with the Vols' recent W over Florida for the first time since '16, bringing them to a 5 - 0 record. With a big game against Alabama tomorrow they're pulling out all the stops (there's already articles coming out about how things will go when students storm the field) and this has gotta be the best one...

Now he's in Tennessee's stadium dancin' all over Alabama's psyche. I mean, look how carefree he is.. there's no coming back from this for the Crimson Tide. 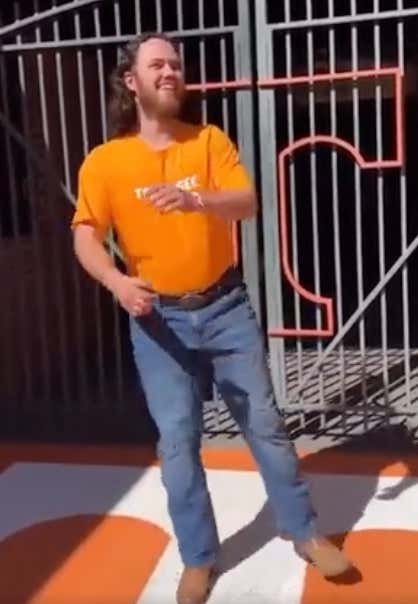 In case you wanted to know a little more about this good luck charmer, Zebb's a machinist by day, but by night he's a member of the J. Creek Cloggers, a team of 36 people who keep the tradition of "Appalachian Flatfoot Clogging" (AFC East) alive.

At the turn of the 20th century, Appalachian clogging emerged, blending dances brought by earlier settlers, such as Irish, Scottish, and English.

If you want to know more about him click HERE because that article by Knox News is an absolute DELIGHT, and in closing - I'll say it - I was torn before because the guy who runs the Barstool Bama Twitter account is legit a lovely person, but Go Vols.

Editor's Note: We need a Rocky Top collabo with Zebb and Peyton Manning.