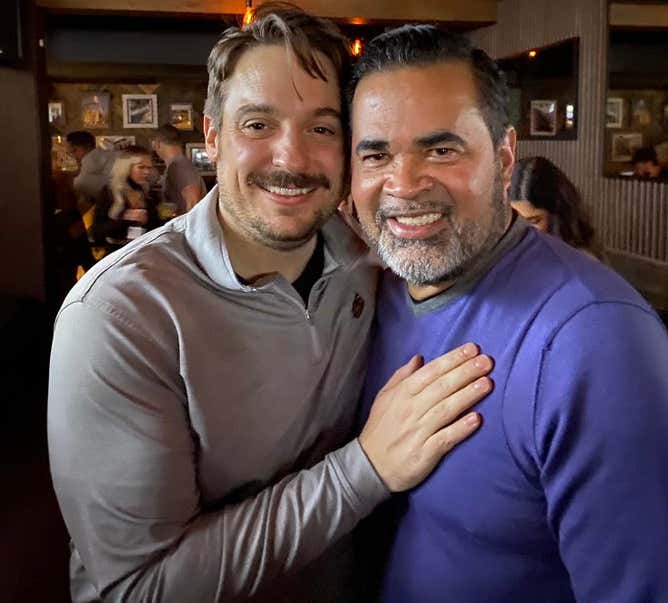 The Burrata Gang has stood with Chief through thick and thin. Awful pick after awful pick, they ride. But even they may draw the line with this week's Basement Draft. There were several categories in this draft:

In the THIRD ROUND, Chief decided to use his Misc. Feature selection. Two had been picked before him with a stocked drink fridge and a bong going in the 2nd and 3rd round. So many selections on the board including two taken after him with a Golden Tee game and a drop ceiling to hide stuff, and Chief settled on Febreeze. The anti-odor spray. Just a stunning selection as the 3rd overall Misc. Feature. A spray you can buy for $5 at your local convenience store. You can have ANYTHING IN THE WORLD and you choose Febreeze. Misc. Feature is so wide open. He could've picked the ones taken after him, he could've picked a lock on the basement door, a separate entrance to the basement, soundproof walls, but he chose Febreeze. Just an all-time pick from an all-time guy. I love Chief, but this was a flub of epic proportions that should not be forgotten about for a long time. Burrata Gang - come get your man.

This was a really fun draft featuring an undefeated guest, Robbie Fox from My Mom's Basement who is 2-0 in these Dog Walk Drafts.

Now, onto the grades! 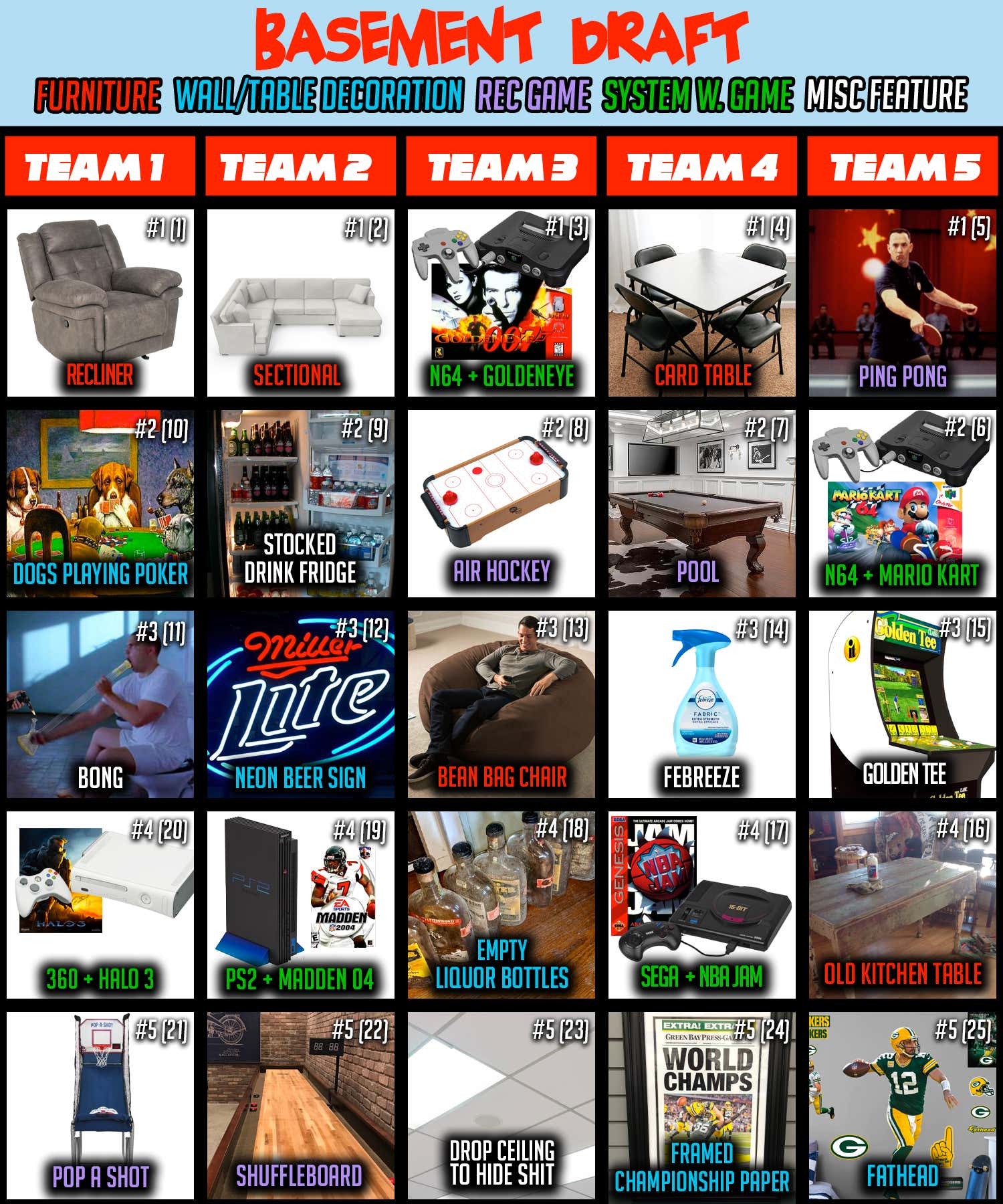 I have to admit, I hate the recliner 1.1 pick. I understand it, but you need everyone to have a recliner if that's gonna play. Basements are about coming together, it's rare you see more than two real recliners together, so I don't love this. It's even my least favorite furniture piece in the lot which contributes to the poor grade. Dogs playing poker is a fine selection and is good for an initial chuckle, but doesn't do much for me after that. I'm not a smoker, so I will disqualify myself from the bong grade. I'm a bit aged out of Halo 3, but I did enjoy the original Halo on the original xbox so can't imagine there is that much difference. Very fun game to play with buddies. Pop A Shot is great value in the last round and the amount of action the one gets in the office proves it's a good piece.

Love this draft. The section is great because everyone's got a seat. Huge plus also if some gals join you! Sitting close FTW! Stocked drink fridge is clutch. A kind of quirky habit I have to this day is if I go into a Wawa or 7-eleven I just love staring at the drink fridge. Going through each door and seeing what's new and what's hot in the streets in the beverage game is oddly relaxing to me. Neon Beer Sign in the 3rd is kinda cool, but extremely cool for underaged kids. PS2 Madden really speaks to me on a personal level. I would've preferred Madden 05 (when the hit stick was debuted), but it was also fun to play as Michael Vick vs. an NFL Europe team like the Claymores and run all the way back to your own end zone only to see if you could actually score against those jabronis. I've never seen shuffleboard in a basement, but I do love it at bars, so I imagine it'd certainly play in a basement.

N64/Goldeneye was the ultimate friend video game. You could play in a squad of four and have a night. It basically spawned the whole Call of Duty revolution but it was super fun hunting your buddy with an RC-P90 or laying low and waiting for him to walk into your remote mine. Air Hockey to me always plays, a fun throwback. White Sox Dave saying they make good card tables is a wild statement though. The Bean Bag Chair is a polarizing piece, but I'm a fan. Nothing chiller than a BBC. Empty Liquor Bottles was a bit of a mysterious choice in my book but I can see the value based on the argument. The Drop Ceiling is a huge steal in the 5th Round and should probably be way higher. Just the ultimate teen secret hiding spot.

Card Table Round 1 is elite. As the 3rd furniture piece, it's astonishing value. It's just good to get your friends around and play some poker. Especially when the World Series of Poker was in it's heyday. Pool is cool, but I was never good. I did enjoy playing, but it does limit the fun to two people, so that takes away a bit. The game this Drafter pointed out did seem fun though. And then we get the Febreeze pick. As I outlined at the top, maybe the most egregious selection in Dog Walk Draft history and that's saying a lot. Sega/NBA Jam is a good pick. I was always a Super Nintendo guy over Sega, but I get the appeal. I used to play with the Mavericks. Jamal Mashburn, for my game - speed, 3s, dunks, blocks, was the best value on the board with those traits and Jim Jackson was a good enough 3-point shooter to get it done. The Framed World Championship Paper is a big point boost from me as I still have a bunch of papers from the day after the Bucs won Super Bowl XXXVII.

Ping Pong at the end of Round 1 is simply incredible value. The fact that ping pong is super fun is a win, but it can also be used as a Beer Pong table puts it in a tier of it's own. N64/Mario Cart is another outstanding pick as it can include four players. And if you've got more than four people? No problem! The races are super quick so you're not watching a whole game of Madden or something long. Golden Tee is really fun. I've never heard of someone having it in their basement, but I would respect the hell out of them if they did. Very fun bar game that translates to the home environment. Old Kitchen Table is great value and is the perfect spot for setting a couple of pizza pies down for the boys to dig into. The Fathead is another underrated move as it's wild to think of how perspective changes from today (I'm 36 years old), to when I was a teen - just how much I idolized these superstar athletes. While part of me still does, it's more of a respect factor and I root for the jersey. As a kid Larry Johnson (Hornets/Knicks legend) was my guy. Football was a few guys, Keyshawn Johnson, Derrick Brooks, Warren Sapp, John Lynch, Ronde Barber etc. But I definitely would've put up an LJ fathead in my hypothetical basement where I got to make design decisions.

That was a bit of a ramble, but who do you think won the Basement Draft? Vote here: