This is not a blog to take any shots at Iowa. They are coming off a devastating 9-6 loss against Illinois, in which they mustered only two field goals. After a magical first drive that resulted in 3 points and had the boys over at Deadwood Tavern thinking they might hit double digits, then Hawkeyes proceeded to turn in 7 straight empty drives, five of which resulted in negative yards. They made the halftime adjustments though, and while they didn't go backwards as much, every single possession they had in the 2nd half resulted in either a punt or turnover. It's truly remarkable how bad they are. 127th scoring offense, 127th rushing offense, and 127th passing offense. They might be the worst Big 10 offense in the history of the conference, but at least they are consistent!

That's not what this blog is about though. This is a blog to demand that the Heisman voters of this great country show some god damn respect to what will likely go down as the greatest receiver in college football history. Through just six games of his sophomore year, he has 31 catches, 536 yards, and 9 TD's. And that's with having to sit on the bench the entire second half because there's not a team on this planet that can stop our offense. Honest question, before you go to the comments and say something you'll later regret, did you actually watch the game on Saturday???

That would be unrealistic in a video game. And that was just one of his three (in 2.5 quarters) touchdowns. His stats, as a sophomore, are already on pace with last year's Biletnikoff Award winner, Jordan Addison. The only difference though is that Marv Jr has to let the ball get spread around to the most talented receiving room in the country, which will likely have 3 first round picks in the same draft here in two years. If the Buckeyes wanted to just feature this guy, I honestly think he could break Troy Edwards record of 27 receiving touchdowns in a single season. Oh, and just a reminder that he HAS to come back and play again next year.

I am confused as to how Marv Jr isn't on the Top 5 Heisman contender boards I see on the television each weekend, but I am utterly lost as to how he isn't even in the TOP 46 ODDS LISTED on the Barstool Sportsbook. 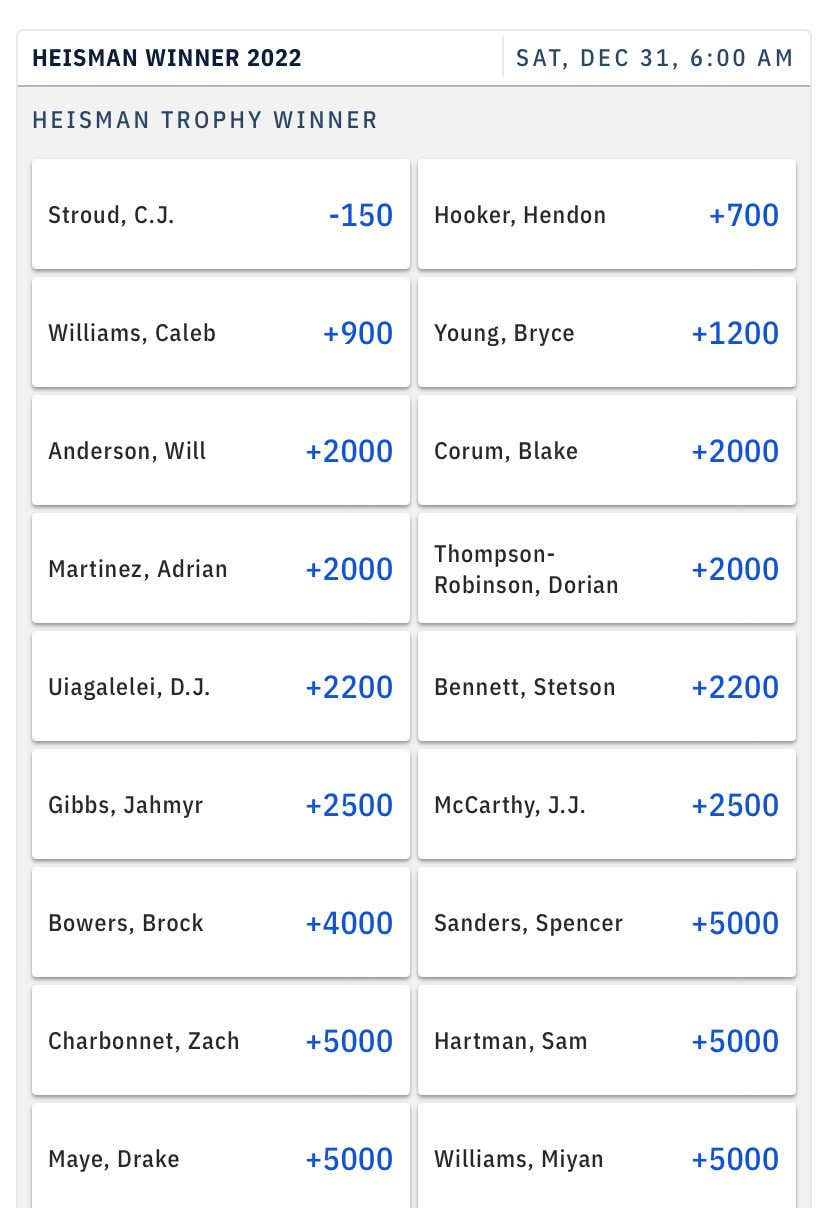 Folks, I can either post 5 more screenshots from the Barstool Sportsbook or you can just believe me when I say he is FORTY SEVENTH on the list at +12500. For the hands down best WR in the country. It makes no sense and the only thing I can come up with is Ohio State is getting disrespected once again.