There are two things I - and most of Giants fans - have been very vocal about when it comes to stuff on the field. The Daniel Jones and Saquon dilemma. By that I mean, what the hell do you do with them in the future? It was easy to say just cut bait and move on from them after this season, but Daboll's a beautiful bald genius. Very handsome too. 4-1, Saquon looking the best he ever has, Daniel Jones looking like a real quarterback even. That's with almost zero weapons, outside of Daniel Bellinger who is basically a mix of Kevin Boss and Jake Ballard.

But that's the ugly and beautiful truth of it all. If the Giants can keep it up and be close to the playoffs/make it, you have to have a discussion. Do you offer Daniel Jones a longer term deal? Do you pay Saquon?

Here's where I stand. I still have reservations about Daniel Jones, but I think if he keeps making leaps and you don't have that top-10 pick, you try to sign him to a short term deal. Something like a 2-year thing and see if he can grow under Daboll. Give him 3 years with Daboll and Kafka and can always move on.

The one thing I absolutely can't take away from Daniel Jones is the fact the dude has balls. Well, not because he's a guy, duh, but the way he played yesterday. Bum ankle didn't stop him from running when he had to and taking hits because the Giants OL is still going through growing pains. Didn't stop him from putting together his best drive of his career in the 4th quarter. That's something that's valuable. It was Eli-esque where you forget about some of the bad and just embrace that this dude is going to show up.

As for Saquon. He's a special talent, but I still struggle with the concept of paying a running back a shit ton of money. When has that ever really worked out? It hasn't. That's why I'm torn. There's no history of the successful running back getting a ton of money and not depreciating in value. There's not too many Saquon's out there, but at some point it becomes what do they want to do with the team. You can win without that elite running back - look at Super Bowl winners over the last 20 years.

All i know is I'm fucking thrilled to be in this situation. Getting to have these debates besides just 'cut their ass' is fucking awesome. We even have Odell wanting a return, kind of: 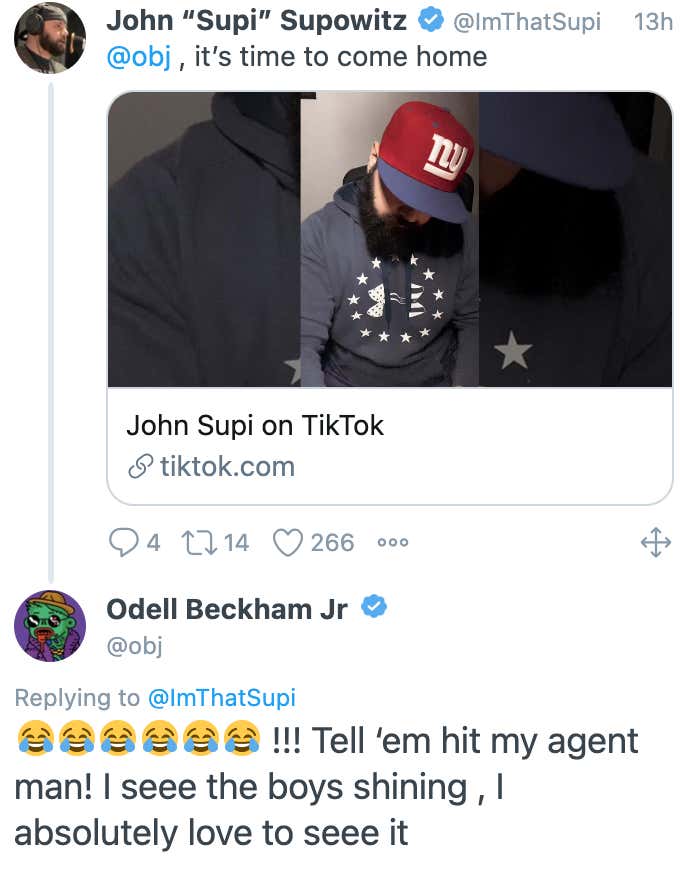 So shout out Mike Kafka and Brian Daboll. Their ability to not be Pat Shurmur, Joe Judge and Jason Garrett is a delight.