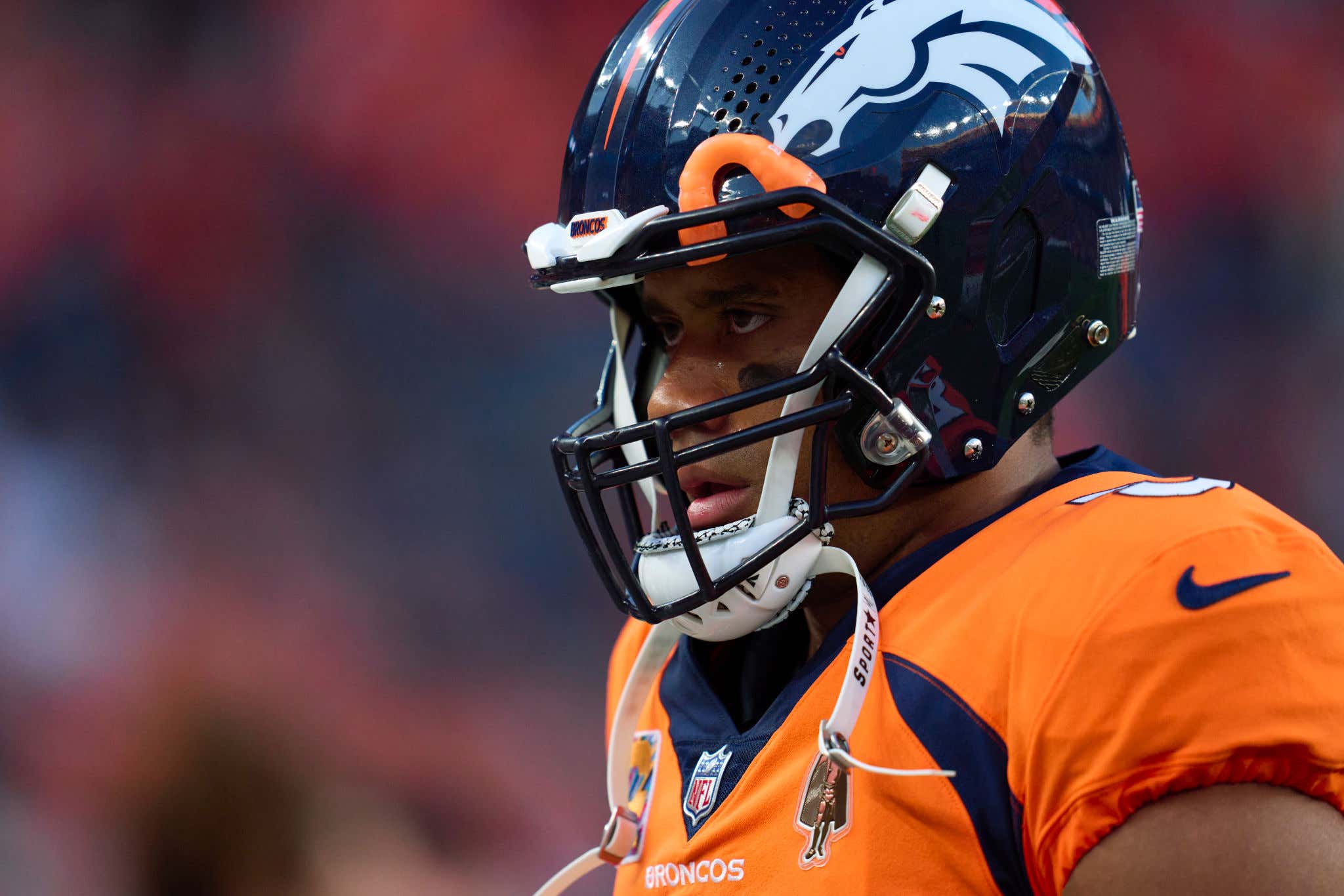 When fans are filing out of the stadium even as your game goes to overtime and you're getting booed even as the bonus quarter starts and the outcome still hangs in the balance, you know you're doing something wrong. That was the Denver Broncos' reality on Thursday night, as they slogged their way to a 9-9 regulation draw with the Indianapolis Colts before Chase McLaughlin nailed his fourth field goal, and the Broncos' final drive stalled.

Seems like those Broncos fans already knew inevitable disappointment was on the way.

I don't know what other angle I could possibly take after what I just wasted hours of my life bearing witness to other than Colts QB Matt Ryan and his weirdo counterpart Russell Wilson seeing their quality of performance, in essence, go the way of human body mass greeting gravity from a great height:

You know what made this beaten-with-an-ugly-stick showcase of football worse? I damn near placed a "No Touchdown Scorer" bet at +7500 odds prior to kickoff, and instead opted for Broncos Andrew Beck to score the first TD at the same odds. He had two hands on a pass from Wilson in the end zone and failed to hang on.

OK. Moving on from yet another of my depressing betting stories.

To best describe what's happened to Matt Ryan and Russell Wilson and what we saw this awful Thursday, we turn to Max Kellerman. He once made an infamous, erroneous prediction back in July 2016 that Tom Brady would fall "OFF…A CLIFF!!!!!!!!!!!!!!!!!" and suffer some serious drop-off at the end of his NFL career. Even at that time, when Brady was 38 years old, Kellerman admitted TB12 was the greatest QB ever. Since then, Brady has won THREE Super Bowls.

The first of those championships Brady seized came during the Patriots' legendary rally from 28-3 down to stun the Falcons, led by that year's NFL MVP…none other than..Matt Ryan!

HOW'S THAT for full circle? Matty Ice is now the Colts' field general. He is 37 years old. And oh my goodness has he aged far poorer than Brady has. The two signal-callers' skill level isn't even close, as the GOAT keeps pressing on in his age-45 season. You'd think Ryan was 45 and Brady was 37.

Related: Brady answered a question today about the plethora of 2-2 teams (Denver among them, Indy 1-2-1 going into this evening so basically among them).

I was willing to give Ryan some benefit of the doubt, because he was in no position to win with the Falcons in his final few years there. They sucked. Bad o-line, held onto their coach for too long. Not a good culture. Just a rough situation. Indianapolis was supposed to be a reprieve from all that. Instead, it's turned into a complete nightmare.

The Colts were somehow favorites to win the AFC South before the season began. I have no fucking clue why anyone would think that. I've had some whiffs on NFL predictions that I'm more than happy to own, but daaaaaaaaaaaaamn it feels so good to be right about how bad Indy is.

When Matt Ryan throws the ball, it just dies off his right arm. Even when he throws with anticipation, it's barely squeaking in there, if it does. I mean, look at how brutal both these interceptions were. The man is the epitome of WASHED. He has seven INTs on the season already!

Oh, PS…man can't hold onto the ball to save his life, either:

I couldn't resist teeing off on Matty Ice first, because I fully believe the Colts have the most overrated GM ever in Chris Ballard who doesn't know his ass from his elbow when it comes to figuring out a viable QB solution — or for that matter, building a roster. Frank Reich is also clearly an overrated head coach. Time for a purge in Indy. Blow it up. Start over.

But yeah…you know I'm about to go in on Russell Wilson's creepy ass. He just got paid almost a quarter of a billion dollars on his new contract and he's BAD.

No wonder the Seahawks were more than happy to accommodate his wishes to be traded away.

The biggest play of his night was basically pure luck: A 51-yard desperation heave to Courtland Sutton that very well could've been picked if a Colts defender didn't run over one of the officials!

And then there was this Wilson INT…like WTF is that????? Especially when you're inside field goal range!

Speaking of field goal range…how about this dandy from DangeRuss in the red zone when the Broncos could've just run the clock down to the two-minute warning, tack another three points on the board, and make a Colts offense that couldn't sniff the end zone all night drive down for a TD?

What do you know!! Another DUMBASS coaching decision by Nathaniel Hackett! NEVER THOUGHT WE'D SEE THE DAY!!!

Wild that Seattle appears to have won its divorce with Russ going away, as Geno Smith has the most accurate four-game stretch to begin a season in NFL history to boot! Not to mention all the draft compensation and assets Denver sent the Seahawks' way to acquire their new face of the franchise. LOL.

Can the NFL give both of these teams a loss? I'm legitimately upset that the Broncos managed to beat the Texans and (somehow) the 49ers. They fully deserve a 0-5 record after tonight. So do the Colts. They got so lucky in that fluke victory over the Chiefs, which was more about KC's miscues than anything Indy did well. That tie in their stupid record came courtesy of a Texans collapse in Week 1.

I know the lack of recovery time sometimes inevitably drives down the quality of Thursday Night Football. However, this was a whole other level of ineptitude that has soured me on both teams. I've seen enough of Matt Ryan, and I'm hoping against hope my slightly facetious/very possibly premature declaration that Russell Wilson is falling OFF A CLIFF comes true. Russ doesn't have a genuine bone in his body. Can't stand him. Matty Ice, on the other hand, is just a statuesque old man in football years with a popgun arm who's painful to watch. Get both of them the fuck out of prime time forever, NFL. Pretty please.

Let me play you out with an excerpt from my NFL power rankings that dropped yesterday:

"I continue to be baffled by the media's love affair with Colts GM Chris Ballard. He hasn't done shit. Team hasn't won shit. Matt Ryan was his version of a solution to his annual QB problem. Indy is 2-2-1 with a fluke win over KC. That said, I like Indy to beat the Broncos on Thursday night LOL because Denver's noob coach has zero chance to get his men prepared for that quick turnaround."