Everyone in a toxic relationship knows exactly what this feels like. This is the official current feel of Chicago Bears fandom (also of anyone who flew cross-country on a red-eye to - let's say - Baltimore after having their flight canceled/rescheduled to drink with the boys all day and night in a fashion that is not consistent with his current state of alcohol tolerance as a father of one). But I did something so refreshing and so rejuvenating this weekend that erased this feeling if nothing more than for just this weekend. I cheated on the Chicago Bears.

I think every fan of a bad team should get one hall pass team that - if given an opportunity - they can cheat on. And there's no perfect 10 in the NFL quite like the Buffalo Bills. So I snuck out of my Bears fandom this week and caught a flight out of town to meet the Bills in a neutral public setting in Baltimore for a date that turned out to be a wild experience both on the field and in the stands. Everything about this experience put butterflies in my stomach in a way I don't recall the Bears have since the days of Urlacher and Briggs terrorizing offenses. It had everything you could ask in a storybook. Lively tailgating. Well traveled fans partying their rocks off. Conquering what appears to be a hopeless situation and coming back to win the game. And, of course, being mildly involved in a fight in the stands. What more could you ask?

It all started at the tailgate and the energy of participating in Bills ritual was love at first sight.

Props to Nikki the firefighter for putting in some Sunday afternoon in-service to put me through my first table. The general consensus from the crew was that the table wouldn't break, but she put enough of a fastball on me to finish the deal. In fairness to my main team, the Chicago Bears have their rituals too. Like when the PA announcer says "There's a flag" we all say "where?" and he says "on the field", and we say "oh". So, there's that!

Then there was a surprise game my buddy made called "Jeff or Het" which means "Jeff or not Jeff". Spin the wheel and if the picture is me I have to drink. If it's a celebrity that looks like me (basically, Nick Cage) then the spinner has to drink. Luckily none of these photos of me are embarrassing at all so there's no point in zooming in for any screen shots whatsoever. 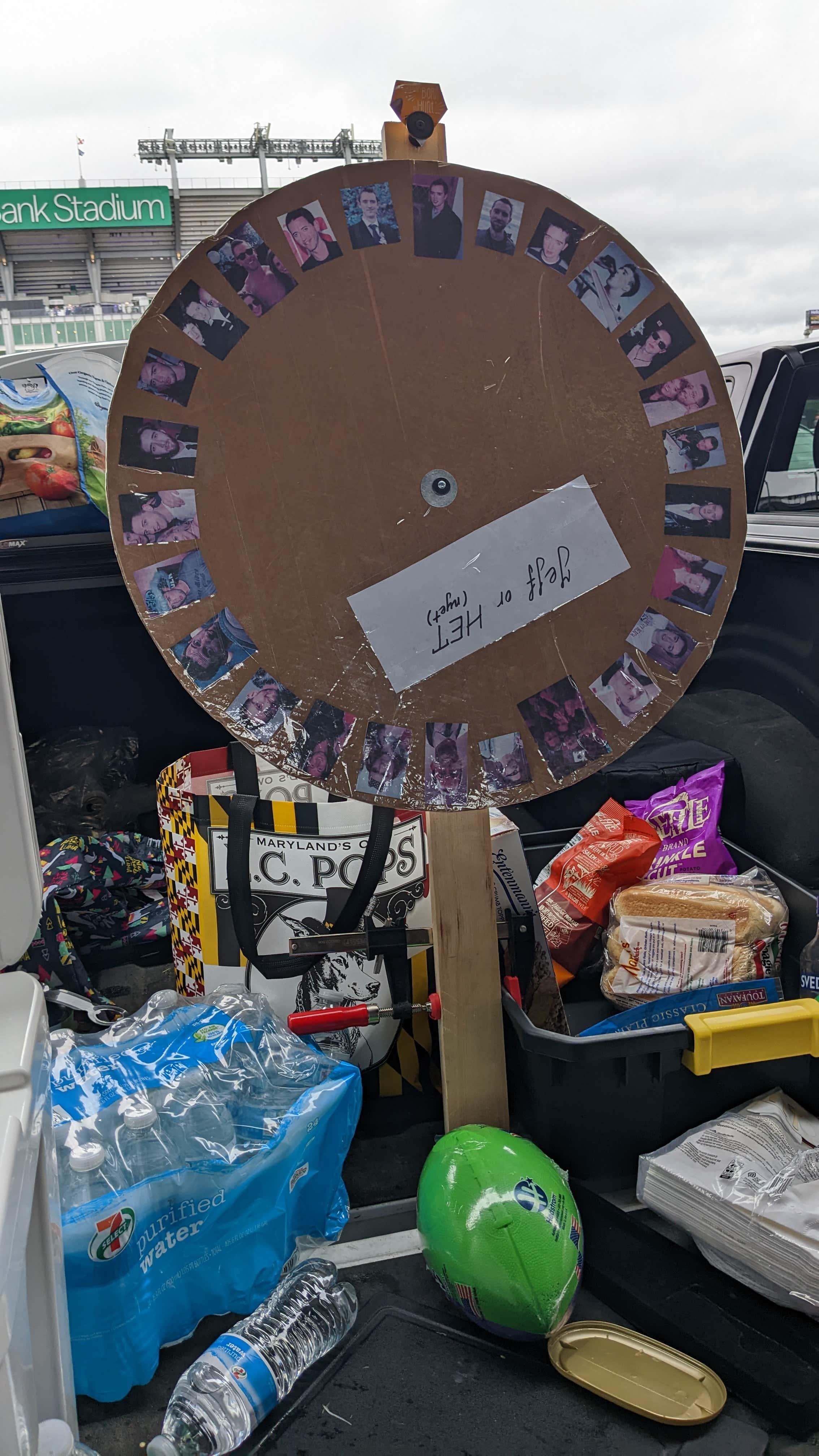 The best part of this inside joke game is that randoms came along wanting to play and had a great time doing so. When shirtless sunglasses guy at about 10 O'Clock landed I did my very best to convince the spinner I had to drink. You'll be surprised to find this was to no avail.

But this was all just the meet and greet. The actual date on the football field started a little rough as I thought I just flew across country to cheat on my team with basically it's identical twin. The Bills looked like they never played in or perhaps even seen rain. I've never seen so many passes dropped. And sure, maybe that's because my team doesn't throw passes but the point stands. The Bills figured their shit out in the second half somehow as the rain became heavier. The turning point came on this 4th and goal from the 2 interception that put Bills Mafia in full flex mode:

"Give me my fucking ball!"

The comeback was quite the fore play. Now for the consummation portion of the date.

OK, here's what went down in the seats right below me. A Bills fan who I learned is named Lucas cheered to himself on the first Bills touchdown in the row right below me to my right with his girl about as innocent as a fan can cheer. Then some twerp Ravens fan randomly started yelling at him right below me and over one seat. I recall the twerp yelling "SCOREBOARD" in a tone and manner that you might expect from a four year-old throwing a tantrum. Something was just off with this little shit. Once the Bills made their comeback and tied the game, the innocent cheering from Bills fan Lucas wanting nothing to do with Ravens twerp was too much for twerp to handle as he went full Andy Bernard punching at him and evidently hitting both Lucas and his lady. Everyone in my crew stood above with row height advantage ready for action, but twerp sat back down in his seat while we were all still assessing what the hell just happened. No security was to be found but they were called. As the security guard came up with everyone in the immediate area pointing out twerp as the perp, here's the rational decision he elected to go with to defend his innocence in this matter:

So much for relying on the he said she said. I stopped the video at this point thinking this dumb fuck would never go a round-two Andy Bernard, but there we were. After the clip stopped, Lucas - we'll say - provided a convincing act of self defense before my buddy Matt went hockey jersey over the head approach holding twerp in place for a second or two as the security guard took it from there. Textbook approach by all involved here. Lucas defended himself and his girl, my crew helped separate twerp and secure him without having to take a swing, and security guard escorted him out. It's really a good thing Matt didn't swing at him because my guy is what you might call a "sturdy boy" and twerp was barely pushing 150 lbs. in the pouring rain. After it was all said and done multiple people came up to us and thanked us adding that this little fuck acts out like this at every game. Not anymore Felicia.

Anyway, that was quite the climax to the date. Here were some solid cigarette in bed moments afterward. 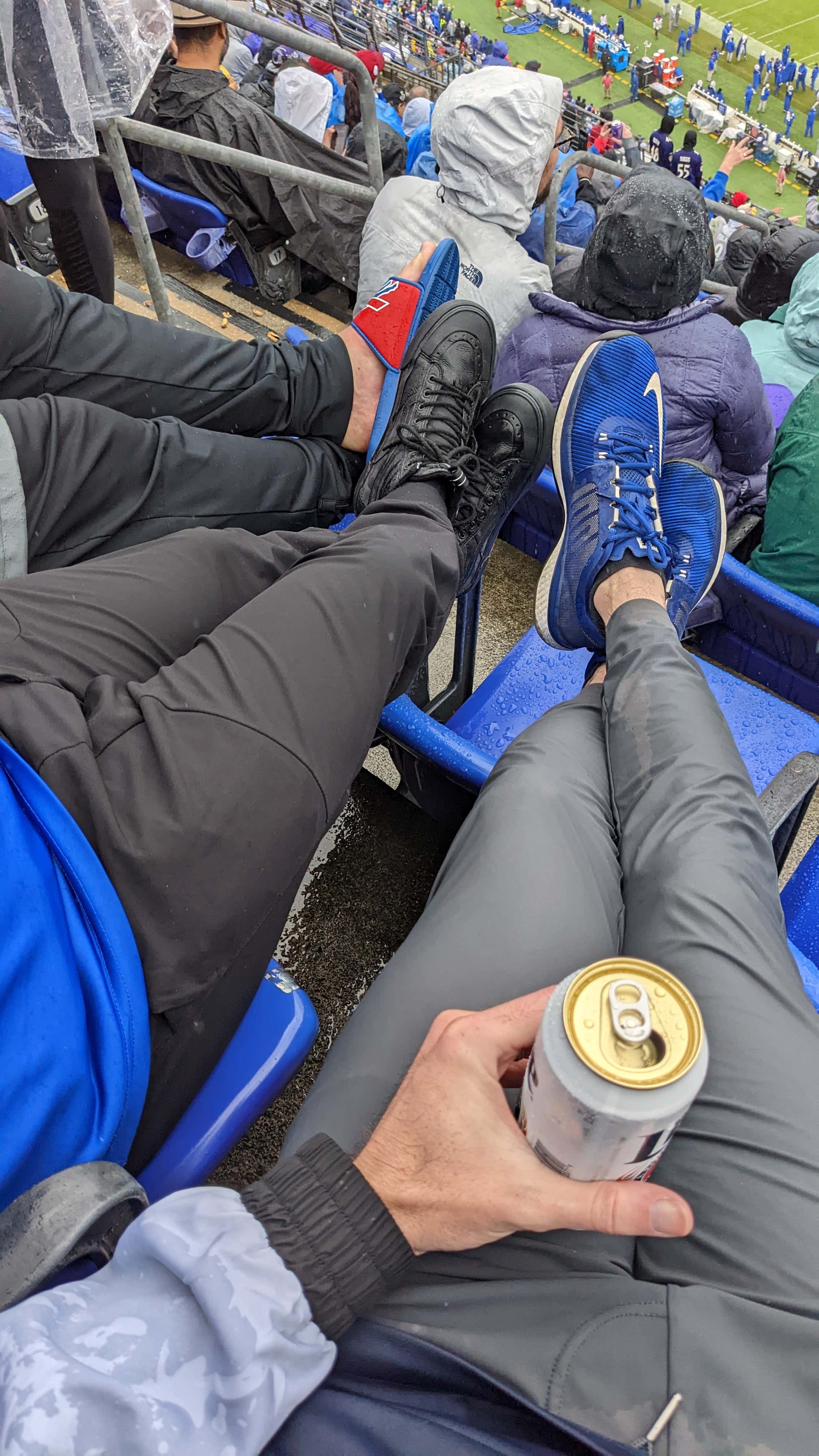 Lucas with a his lovely lady and a slight battle wound on his left cheek. Kid showed a lot of restraint, and - when needed - full warrior spirit. I for one would not fux with this guy - I'll leave it at that: 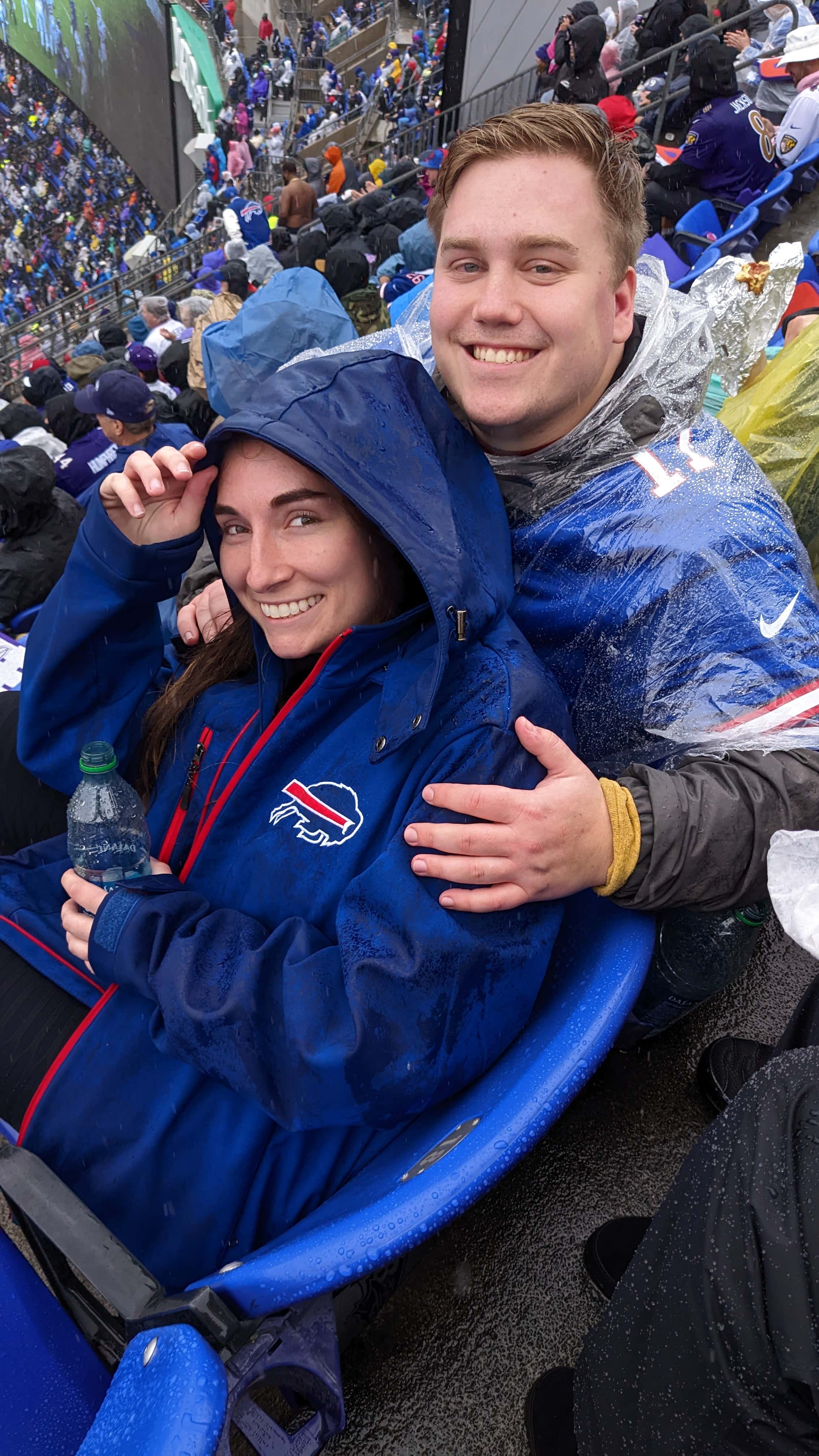 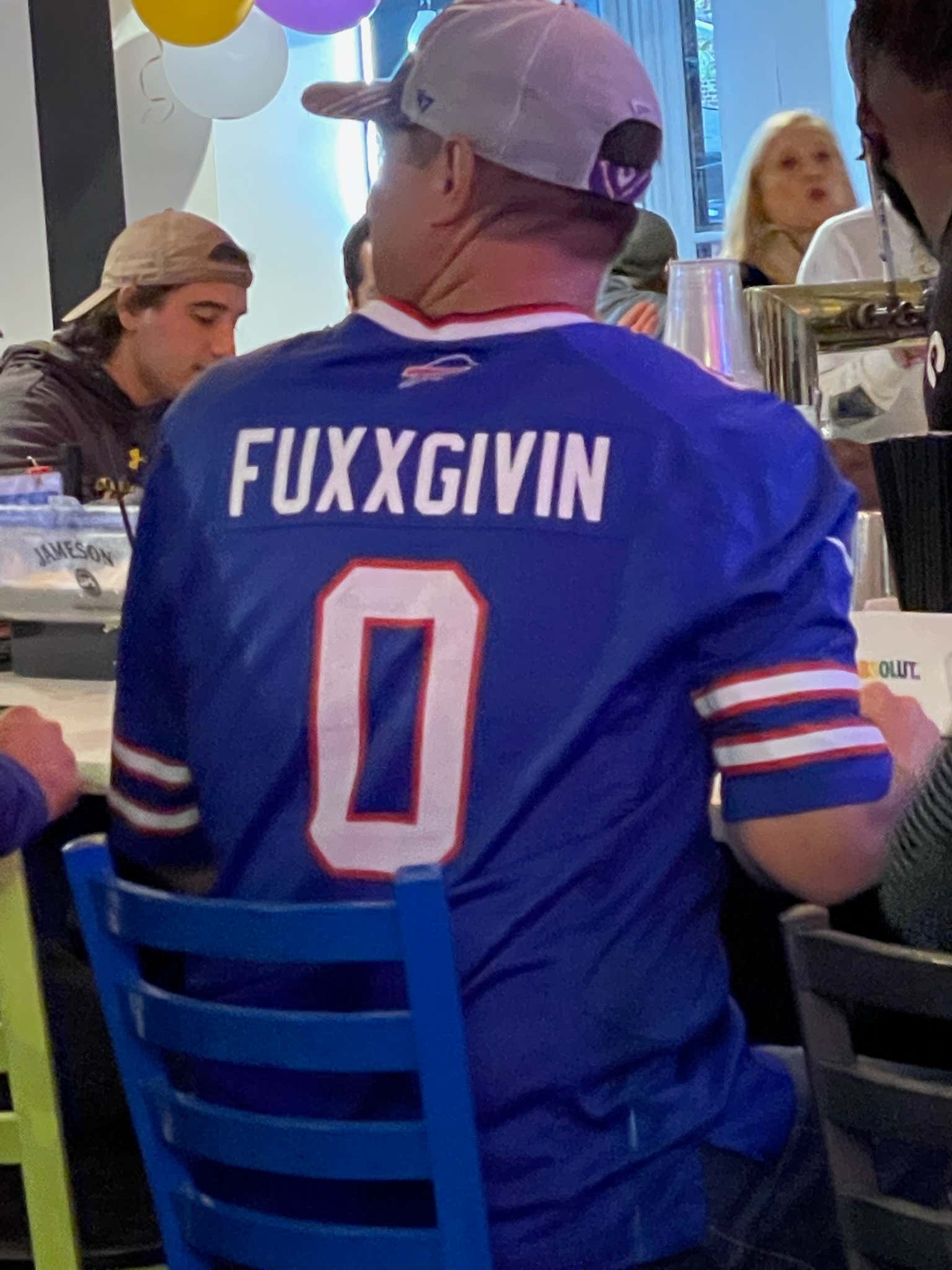 But all good flings must come to an end. This was a great weekend of lived fantasy but I know I'm destined to go right back to my main thing. I haven't started my weekly five sad NFL stats blog yet but I just know the Bears will inevitably force me to put them on it yet again. That's OK. I'll always have this memory now of being an honorary Bills fan. My brain isn't recovered enough yet for a witty call back blog ending so I'll go with this: The Bills will now be my Jack Dawson and my heart will go on without them in my life anymore. Only, I'll be the one sinking to the bottom while the Bills live a flourishing life.