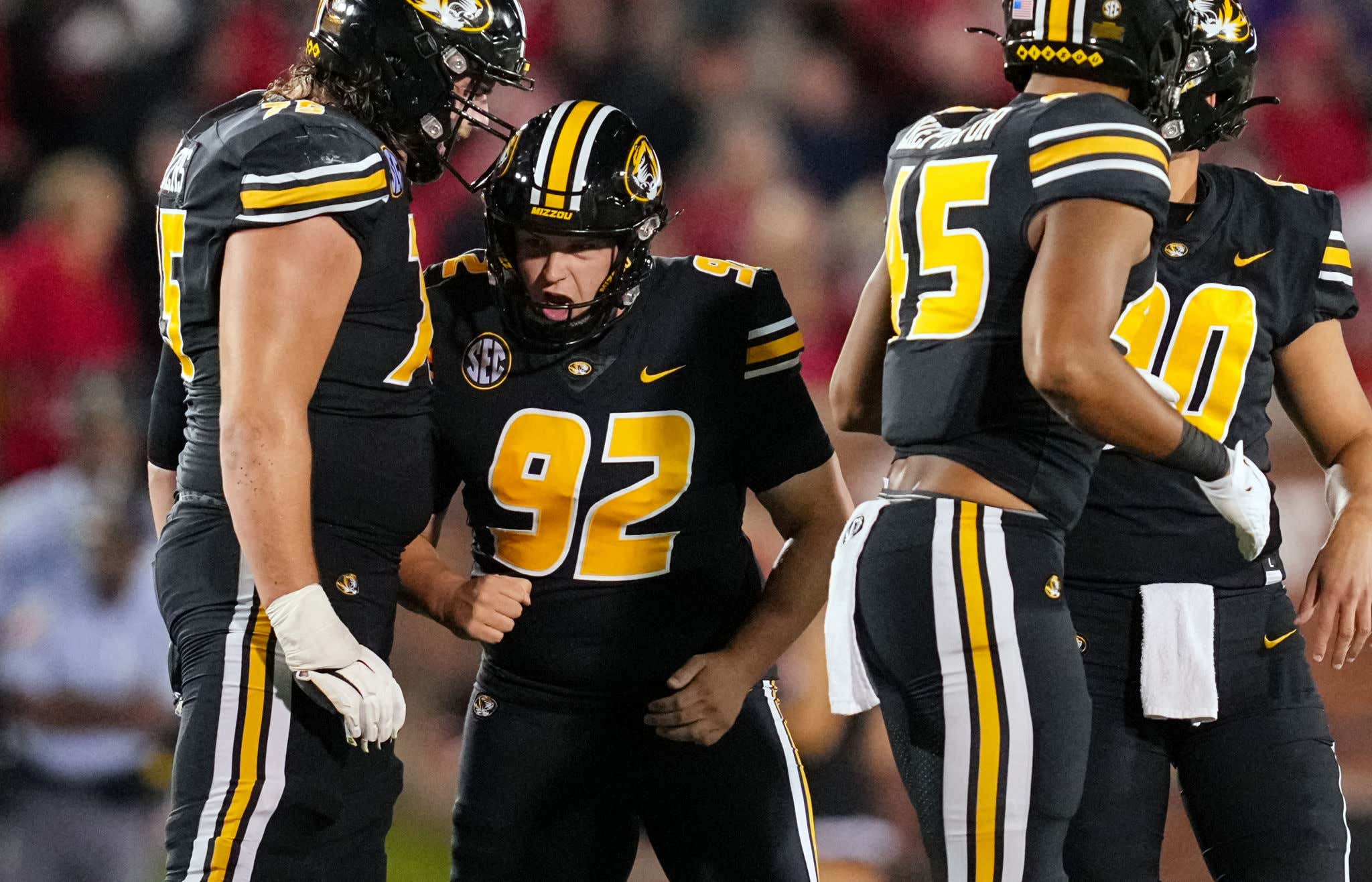 Thank you, Harrison Mevis, for saving us from college football's catastrophe of field goal-related ineptitude. To be fair, you contributed your fair share last week, but MORE than made up for it with a piss-missile placekicking masterpiece on Saturday night.

That first tweet and highlight above are a fitting summary of Mevis' redemption arc. He's an otherwise excellent who was wide right on a 26-yarder to beat Auburn in regulation. Total choke job. He only missed two of 25 FG attempts in 2021, three of 20 the year before, and that misfire was already his third of this year. To say the least, Mevis bounced back in a huge way against the top-ranked Georgia Bulldogs.

All Mizzou really had to do — easier said than done when facing Georgia, I realize — was move the ball not terribly far past midfield to give Mevis a chance for three points. Dude was locked in.

And before you jump all over me for poking fun at his unconventional kicker build, the "Thicc Kicker" moniker, as well as "Money Mavis", actually comes from the man himself:

I'm dying over the fact that Twitter tags the above media as "sensitive". Yeah trust me, you're not ready for the smut and sultry nature of those Mevis photoshoots in his Tigers uniform. He's listed at 5-foot-11, 254 pounds. No wonder he has a bazooka for a leg. Lotta momentum and force smashing those things through the uprights.

Credit Missouri for hanging tough with Georgia. It seemed inevitable that the Bulldogs would tightened the screws on defense, and once they committed to dominating the line of scrimmage, the hosting Tigers had little chance to hang on. Still, they damn near did thanks to BOMBS like this from Mavis:

Going 5-for-5 with basically three from 50+ is sick. Even with the one yard off on that 49-yarder, Mavis has set the Missouri program record with nine career field goals made from 50 or more out.

The hilarious subplot to all this was Big Cat, for some reason, decided to match NFL QB Chase Daniel's offer to pay the full bar tab for anyone at a local Columbia, Missouri, bar on Saturday if the Tigers won:

Mavis was making our guy sweat it out, that's for sure!

All ended well, though. I still think Chase Daniel should pick up that fucking tab. Dude is a glorified clipboard holder who's been hoarding wealth from the general American public. Counting his contract this season, Daniel will have accrued $41.8 million in career earnings for throwing 261 passes and making five NFL starts. That's a sweet gig if you can get it!

I'm just messing around. Good for Daniel carving out a career for that long after going undrafted in 2009. But seriously, sir. You better pay up sometime.