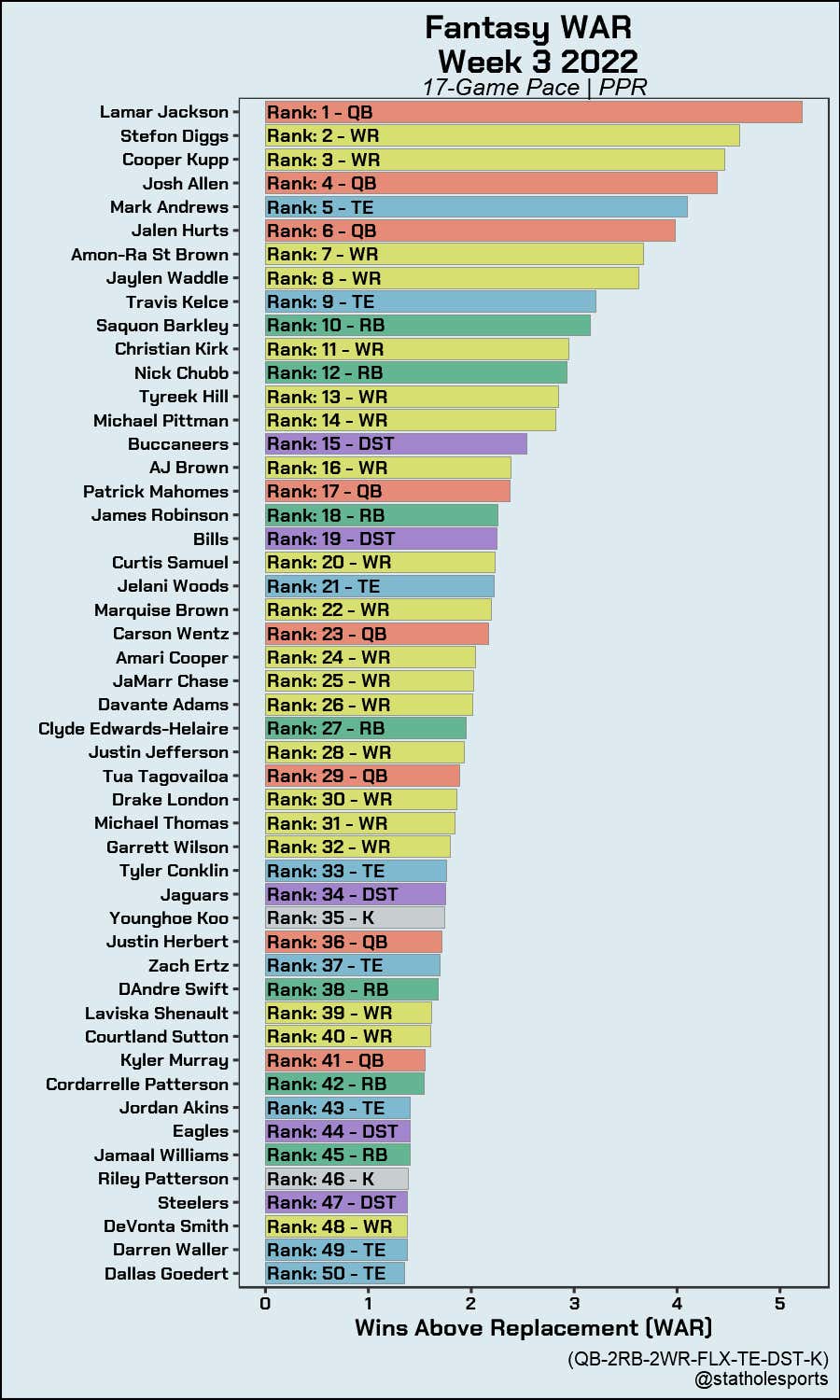 What you're seeing above is a ranked listing of value for the top-50 fantasy football players so far through three weeks. This is basically the one smart thing I've ever done with sports analytics programming and life in general. It's a wins above replacement statistic that tells you how many more head-to-head fantasy match-up wins your team is estimated to have won vs if you started a replacement-level player instead at the same position. For example, if Lamar Jackson keeps his ridiculous pace up for 17 games he'd win you about 5 games more than if you started a baseline quarterback. That's all you really need to know for this blog, but if you're interested in the nerdy details you can check it out here.

If you've followed me on Twitter for a while you know I stan rolling the dice on top running backs. Yes they break easy, but when they hit they send you straight into 6th gear on the Auto Ban. There's nothing like the reverberation of running back muscle motoring your team when you hit on the right ones. Meanwhile, the Zero RB stans select their boring ass Toyota C+ POD like wide receiver driven teams designed to limit any risk and any fun. These guys are buying 6 month CD bonds while us running back truthers are head first into meme stocks.

The thing about taking running backs early is you just have to hope you get the one or two who's transmission doesn't drop and send your entire team off a cliff. It's a bit of a crapshoot, but the rewards can be monstrous. Here's how that all turned out for us last season:

2022 has been a heaping pile of squirrel shit too, but at least most of the top names are still healthy (so far). Aside from Nick Chubb and Saquon Barkley, the top drafted running backs are nowhere to be found in this top-50 list which - to makes matters worse - includes two kickers. Where you at Jonathan Taylor? Christian McCaffrey, Austin Ekeler, Alvin Kamara, Najee Harris, Derrick Henry??? Are you all trying to work remotely this year like everyone else too?

Things are really going to need to change soon or the Zero RB guys are going to be dancing all over my grave. I can't have that. I need bragging rights for at least up to mid-October when I write my home keeper league's Midseason Report - a 12-team dossier roast of every one of my dumbass friends and father. If you ask me, I think it's every Commish's duty to draft such a document. My team is holding on at 2-1, but if things don't turn quickly and my running backs continue to eat poo, I might have to cancel plans of blogging the Midseason Report out of a sudden respect for my league's privacy.

Maybe Week 4 is when things start to turn around, but I get the sense that some of the top backs are hanging on by just a thread. McCaffrey is questionable. Taylor missed the first practice of his entire football career including high school. Things are just a bit tense. At least Joe Mixon got things off on the right foot Thursday night for us running back truthers so we'll see what the weekend brings. But wish my team that you don't care about luck because it will pay off for you when I blog about all the dumbassery I have to deal with and roast them all to hell.