Source - A Manny Machado fan pummeled a Dodgers supporter in a wild fistfight at the Padres game on Wednesday night -- connecting with haymakers over and over again.

The scrap went down at some point during L.A.'s 1-0 win at Petco Park -- when two rival fans started throwing hands at each other after getting into some sort of disagreement in the stands in right field.

Footage from the scene shows the Dodgers fan got the worse end of the deal almost immediately.

The footage appears to show a cop at the scene. We've reached out to the San Diego Police Dept. for comment on it all -- but so far, we haven't heard back yet.

Good GOD that's a punch. I'm honestly surprised that the guy's head didn't snap clean off of his body. Look at how far back his neck went after he took the shot... 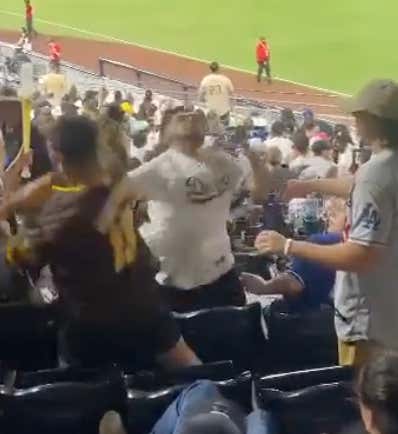 The fact that he's was able to not only survive, but hang in there for another minute is nothing short a miracle. Granted it helps when five guys jump in to stop the fight but still, the man has a concrete chin. Whenever I see videos like this I always wonder what caused the fight and the answer is always the same - booze. It really is that simple. People get so drunk that they can't control themselves. It's very sad to see. Makes for a great blog though. That's it for this one. Have a lovely Friday, friends.