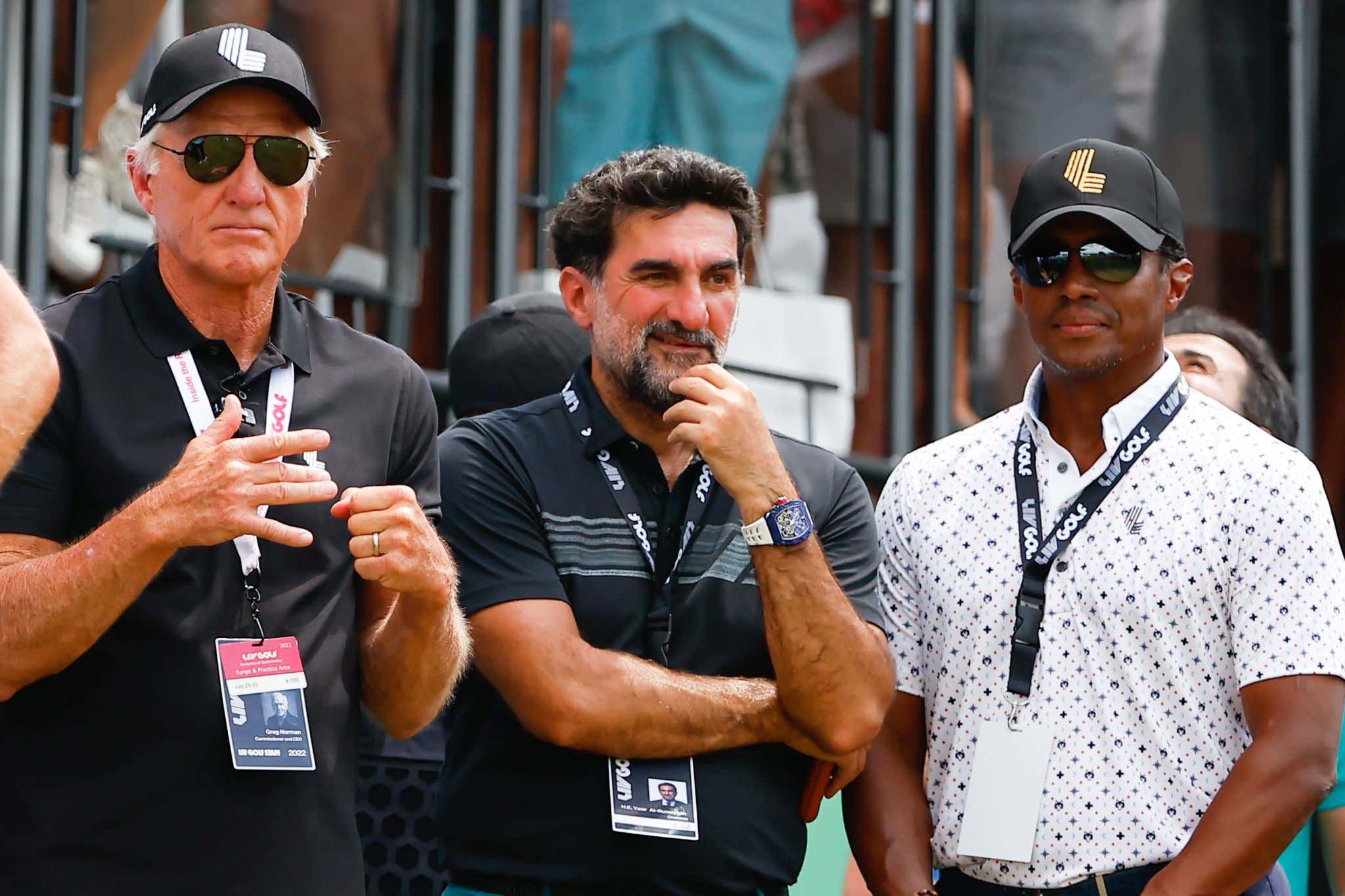 Golf industry insiders will tell you that the PGA Tour's model left it vulnerable for decades. The tour has long been constrained by the fiscal responsibilities that come with being a 501(c)(6) nonprofit corporation. The players were never guaranteed any money and the best ones didn't play against each other nearly often enough. What's more, the tour does not own the five biggest events in the professional game—the four majors and the Ryder Cup.

It's not how you'd design or structure a sports league if given the opportunity in 2022—and, in the past few months, they've begun guaranteeing players money and changing the schedule to ensure the best face off more frequently—but the PGA Tour continued virtually unopposed for 50-plus years. This run was thanks not to a hyper-efficient model but to a strong brand, ever-growing prize funds and gargantuan barriers to entry. It's no coincidence so many startup sports leagues have fallen flat on their face. You're going up against a known entity, which is always an uphill battle. And starting a league requires a ton of money, especially if the goal is to lure top-level talent away from the established leader. Consider the fate of the original USFL, which spent out the ass to attract stars like Herschel Walker only to fold after three seasons. It simply could not sustain its level of spending. Too much money going out, not enough coming in.

Which brings us to LIV Golf. On Tuesday evening, Golfweek's Eamon Lynch confirmed what we'd all suspected: that, with the major networks committed to the PGA Tour and the streamers wanting to avoid toxicity, LIV's only option to get on linear television would be to essentially buy their way onto it. Lynch is reporting that LIV is finalizing a "time buy" deal with FOX that would see LIV pay for airtime on Fox Sports 1. They'll also be in charge of funding their own production costs and finding corporate sponsors (commercials), two duties that would normally fall to the network. We don't yet know the ins-and-outs of the deal, and it's entirely possible that LIV could see some money if they reach certain viewership. Last week I asked LIV's chief of media, Will Staeger, about the media-rights process and he insisted that significant demand to broadcast LIV's product would result in a big-time broadcaster paying LIV for the right to show the action. But according to Lynch's reporting, LIV's Saudi Arabian backers will continue to write after check after check with virtually nothing coming back.

It's an imbalance that wound up dooming the original USFL. But LIV is a different beast entirely, one seemingly unconcerned with profit. At least for now. LIV executives have called themselves a "startup" throughout this inaugural year—and just like other startups, they're willing to eat losses in the interim in order to get their product off the ground. The Saudi government-owned Public Investment Fund, LIV's main financial backer, is reportedly willing to spend $3 billion to get the league going, but that number seems low given the sheer amount of financial commitments they've made. LIV reportedly committed between $500 million-$600 million to just four golfers—Phil Mickelson, Bryson DeChambeau, Dustin Johnson and Cameron Smith—and that doesn't include the other 44 who will play in the LIV league in 2023. They're also paying for: travel and accommodations for players, caddies, families, agents and coaches, which the PGA Tour does not; $20 million in purses every week; salaries to a full staff of employees and executives; hosting fees to each course that holds an event; infrastructure buildouts at tournaments; marketing costs; production costs; and, now, airtime on FS1.

All these are necessary spends to challenge a giant. What makes the LIV case so different, however, is they're able to do this with virtually no money coming in. The PGA Tour offsets its spending with a massive media deal, ticket and hospitality suite sales and corporate sponsorships. LIV does not have any of that yet. The action is currently broadcast free online, and the new U.S. media deal would appear, at least initially, to be a money-loser. Tickets for the four events in the U.S. could be had for a couple dollars, if not totally free, and they capped the number of fans at the first two. The first five LIV events have been completely devoid of corporate sponsorships. The only logo I saw on signage at LIV events was LIV's.

I asked Atul Khosla, LIV's Chief Operating Officer, about this imbalance back at LIV Bedminster. He left his role as the chief corporate development and brand officer for the Tampa Bay Buccaneers to join LIV.

“If you look at the investment portfolio of our primary investor, PIF, they have invested all over the world in incredibly large businesses that they believe will be profitable,” Khosla told me. “Their view of this is no different. That’s the expectation that we have from our board.

“Like any other startup, do we have upfront costs to get the product off the ground? Yes, we do. And it is no different than a burn rate that an Uber may have or any other startup tech might have to get the product off the ground with a vision of disrupting the space. We are fortunate, of course, to have an institution that has the patience to be able to go through this methodically and in the right fashion.”

That patience, Khosla said, is not unlimited.

“If you look at the investment portfolio of our primary investor, PIF, they have invested all over the world in incredibly large businesses that they believe will be profitable,” Khosla says. “Their view of this is no different. That’s the expectation that we have from our board."

But because the PIF has so much money—recent estimates have the the total value of the fund at $620 billion—LIV doesn't face the same time pressure to start delivering that, say, the USFL did. LIV executives talk about a 20- or 30-year vision for this. If they have to lose a couple billion in the meantime, well, they can afford to do that if the end result is dethroning the PGA Tour. There are also ancillary benefits that come with being involved in the golf space—by holding big events in the United States, the Saudis are hoping to de-stigmatize themselves. This is what's been known as "sportswashing," or using sports to gloss over the country's horrific human rights record. Saudi executives' hanging around the well-moneyed golf crowd could also lead to business relationships that pay off down the road. If LIV Golf itself could break even, these ancillary benefits might make the spend well worth it for the Saudis.

Still, LIV maintains that the golf business itself needs to be profitable if it is to survive. A key part of their business model is team ownership—there are 12 LIV franchises that, at present, are owned by the league and high-profile players that have equity. The plan is for those franchises to become valuable enough to sell them to wealthy individuals or corporations that want to own a particularly shiny and sexy toy. Formula One is the guiding light here—12 teams, each with the power to sign and trade players, each with its own staff and merchandise.

That's only going to work if there's demand for the teams, and that's why LIV is willing to pay to get on linear American television. Teams have no value if the public isn't aware of them, and LIV's recent YouTube numbers suggest not many people are following. Per Apex Marketing group, an average of just under 61,000 people streamed the final round of LIV's Chicago event. Such a modest audience is to be expected given the start of the NFL season, so the 39,538 average on Friday might be more concerning.

But with Tuesday evening's news, LIV will get in front of way more eyeballs. In February, Nielsen estimated that FS1 is shown in nearly 80 million households in the United States. The hope is that type of exposure builds value that'll eventually offset upfront costs. It's a microcosm of LIV's finances until now: spend now, hope it pays off later.