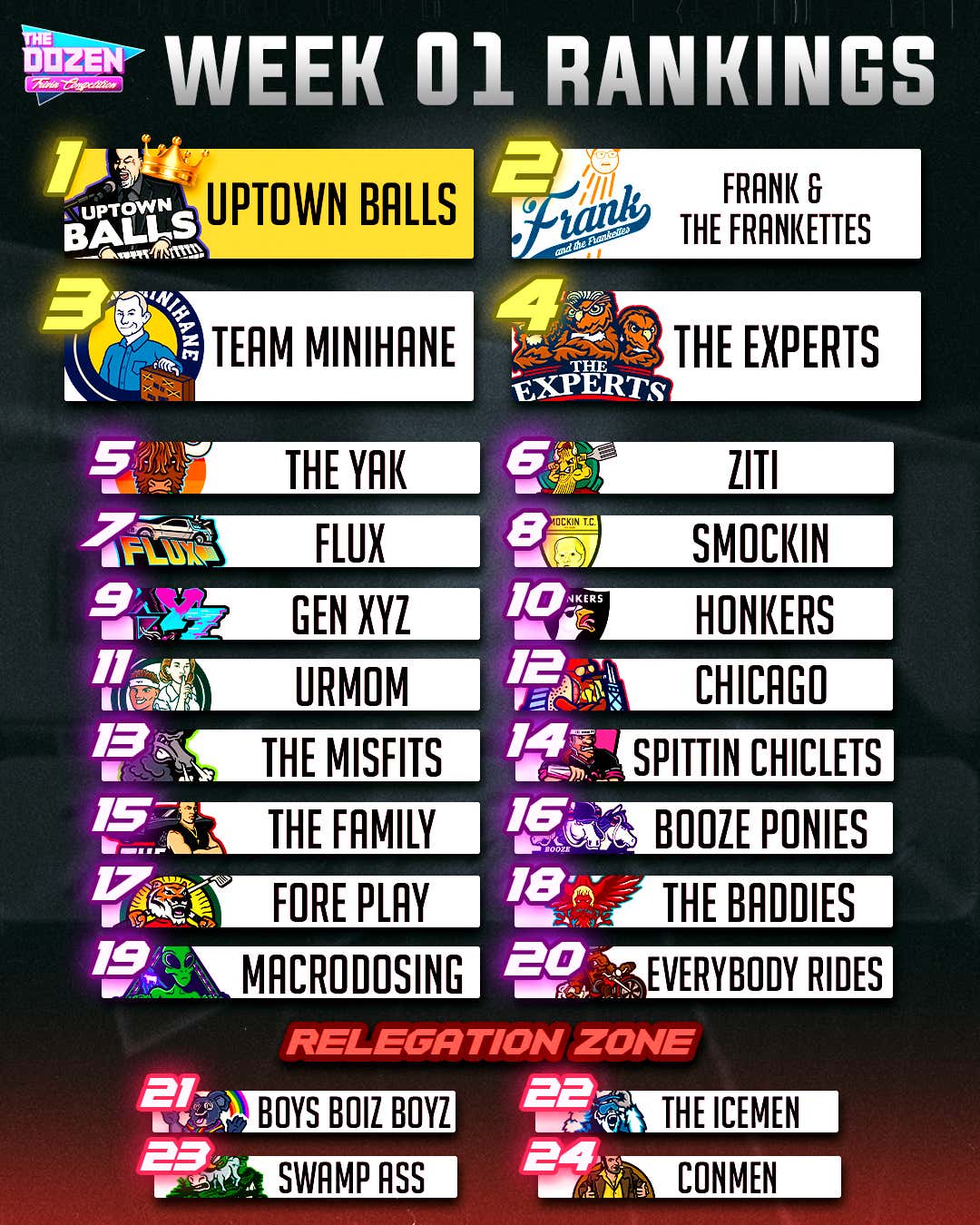 The Dozen Season 3 is just a week away (CLICK HERE TO BUY TICKETS TO SEE THE DOZEN KICKOFF EVENT LIVE FROM PHILADELPHIA ON OCTOBER 4th). The first batch of rankings for the leagues, all done by the fans, are here, and we have a breakdown from our insider & correspondent Scoops L'Aguirre...

--
What's up, Scoops L'Aguirre here. Y'all ranked the 24 teams in The Dozen as we get ready for Season 3. Here's my breakdown of those rankings:

You would’ve thought the honorary Crime Dog All-Star and the Nadu Crew would have been able to rise up and get more votes for the opening season rankings. Cons being the league's notorious villain clearly did nothing to help their status with the fan vote.

EBo is an analytics guy who runs the Barstool Sportsbook social media, among other duties. Considering he filters through a ton of sports names and info daily, EBo could come from out of nowhere to make this a dangerous team.

Waiting on pins and needles for the moment that Jeff announces what Stu Feiner’s niche category will be. Bodybuilding? Edible Inebriants? Oral Sex? Like and Subscribe! I am surprised they didn't open up with a stronger fan vote.

If I had to pick one team to come out of nowhere like urMom did last season, it’s Boys Bois Boyz. Jack Mac knows Sports, Joey knows Pop Culture, and Philly Mays has quietly told people that he thinks he will be great on the show.

---END OF RELEGATION ZONE--
(Bottom 6 ranked teams will play the first week of January 2023, with the four lowest ranked teams following the matches eliminated from Season 3 of The Dozen)

Murls has a solid cult following riding with him, and there’s a lot of hype behind him as a potential Rookie of the Year. Their team logo goes hard. With some early success, they could shoot up the rankings quickly.

Arian Foster and the Macrodosing squad seem perfect for a game like The Dozen where random internet browsing comes in handy. I wonder how Big T would have reacted five years ago if you told him he would be on two trivia teams in his life, one including Lisa Ann and the other Arian Foster. MadDog has also hyped up her celebrity-related skills off and on air.

On the one hand, Paddy will be at a distinct disadvantage in the more US-centric categories; on the other, Jeff will likely bring categories into the game we don’t typically see to be an equalizer. Paddy is going to be hit-or-miss in this league with no in-between. I am also surprised by how low they are in the fan rankings, as well.

Frankie & Trent have become massive Dozen fans, and Foreplay has a lot of fan support, yet they still got left on the outside looking in for last year’s tournament after going 0–1-1. If not for RDT filling in for Will Compton in their game last season, Foreplay probably would have made it in.

The Booze Ponies are loud, have a great logo, and have great fan support. Are they good at trivia, though? The fans think they are middle of the road. I will note, Dana is better than people give him credit for with trivia.

Nothing is stronger than family. Reags has always been one of the league’s top scorers, and John Rich is a weird brain made for The Dozen. Feits was the only bright spot on the sinking Nightmare ship last season as he averaged over 4 points per match and is one of the strongest players in Television & Movies. This is now Reags' third team ever on The Dozen, setting a record.

RA is a Top 10 player who doesn’t get the recognition because the Chiclets don’t play enough. Biz is awesome at Celebrity Mashups, and Whit is always good for a couple of points. Their fan ranking here at 14th is the lowest it has ever been, will they need to show out more this season to regain that support?

The newest version of the Misfits might be their best, with RDT, Keegs, and Dante as the starters and Hank as their head coach. RDT was 3rd in the league in Points Per Match last season as a replacement player! You put Dante as a role player who dominates and Keegs who kills it with Pop Culture around him, and you realize this team is a legitimate threat to go far. This team is being grossly underrated by the fans, in my opinion.

Oh, how the mighty have fallen. Chicago’s started with them holding The Crown and having multiple defenses. Then a cheating scandal… then getting blown out by the Yak live in front of their hometown… then losing in the first round of the tourney to Spittin’ Chiclets. Making it worse, each of those big losses came down to MLB guys missing MLB questions. Will the fans be wrong again with their early ranking of Chicago?

Rudy rightfully gets a ton of hype and love as urMom’s star player; however, KFC & Jack McCarthy have both had big point games where they carry their team. urMom is a good team. Are they elite? Not sure about that; at the very least, they put on entertaining matches. They had a crazy high fan vote going into the Tournament II last season, but the love seems to have worn off a bit as we enter Season 3.

Losing Coley is massive as he was one of the league’s top scorers and maybe the best in terms of lifeline usage and setting up his teammates. Francis will be a good player; it’s just difficult to expect them to gel as well as they did with Coley. It's hard to tell with this ranking how good the fans view Francis will be in the league, as all of the Top 10 teams are pretty good and separated by a hair.

Gen XYZ is like Texas Tech Football. There is no rhyme or reason to any of their strategies or much teamwork. They put up points and don’t care if their opponents are scoring too. But they also sand-bagged much of Season 2, after doing the same in Season 1. When they're locked in, they're a great team, let's see if they can sustain some success.

Titus and KenJac are both All-Star level players, and Donnie is an all-time glue guy. Smockin had their worst game ever in the tourney last year (against the Champs), but they will bounce back and put up another solid under-the-radar season. I expect big things from Smockin this season.

Flux has never played a game before; nonetheless, fans took one look at this team and said:

Ok, let’s rank them high, they said; they’ll probably do well. They also are going to be fierce rivals with Team Minihane.

Ziti finally gets some respect. Dave empowered his big boys and led to a crazy end-of-season stretch with them ripping off wins against the Frankettes, Honkers, Yak, and urMom. Clem is the Snack God, and Eddie was an All-Star level player during last season’s tourney. Nobody plays a schedule that rivals Ziti's when it comes to difficulty, and we saw that when they made their run in the Tournament.

One of the Dozen’s powerhouses, The Yak is coming off an up-and-down season. They won The Crown twice, had multiple high-volume scoring matches, and looked primed to go far in the tournament, but then a rogue Team Ziti and a “failed” KenJac phone-a-friend ended their season in the quarterfinals. It was a "down year" for The Yak, but I, along with the fans, expect a bounceback.

The Experts open the season 4th following their loss in last season’s championship. While Brandon Walker calls The Dozen his show, not enough talk got made about him scoring only two points in non-Niche during the Semifinals and Championship combined. Brandon is already upset by the fans not respecting them out of the gates.

Kirk is the reigning MVP, and with Big Ev replacing Pat, version 4.0 of Team Minihane looks like its best form.

The reigning champs deservedly enter the season ranked #1, which is a bit surreal considering that prior to this ranking, they’ve never been higher than 7th. Will they go back to chaos or dysfunction or continue the success?

--
Don't forget to buy tickets to see The Dozen kickoff Season 3 in Philadelphia!

We will release the preseason All-Dozen Teams tomorrow!