Before we begin addressing the dire situation as the Patriots entire season balances on a razor's edge, and address the elephant in the room. Eternal thanks are in order to Matthew Slater for point out what has been right under our collective nose for 14 years now. Longer, if you were following Michigan State football in the 2000s. Maybe some among us was aware that Brian Hoyer's real first name is Axel, but I can't honestly count myself among them. And it's not like I heard and forgot. No one forgets a name like that.

And it begs the question of why he'd go by Brian. Which, while a fine name and all, is a distant second to the one Mr. & Mrs. Hoyer chose to put first. Since he was born in 1985, just as Guns 'n Roses formed and turned one just as they signed with Geffen Records and went straight into the stratosphere, you'd think every kid he grew up with would've killed to have the kind of cool that came from that association. Hell, those of us old enough to remember when the Packers took Tony Mandarich No. 2 overall in the 1989 draft, there was no fucking escaping profiles of him that always pictured him pumping big iron with a bandana on his head and mentioned his close, personal friendship with the band and his dog named "Axl." I mean, only Peter Griffin names his dog "Brian."

But I digress. That's not why we are gathered together in this dark hour. We are here to discuss Axel Hoyer, and what he can do for us while Mac Jones' Wolverine-like healing power does its thing. And there is no telling how long that will take.

Of course Jones and Bill Belichick have each shocked the world by giving such detailed, medically accurate and complete disclosures of the condition of his high ankle sprain that the Pats organization may face criminal charges under the HIPAA statues. Belichick, in revealing that this time - this one particular time - he's not going to speculate wildly about a player's health, just to appease the reporters who are asking:

While Jones went all Broken Arrow, deviating from the team's cultural norms by saying he's taking things ... wait for it ... "day to day.":

Just to better serve you, my adoring public, I did a little research of my own. I went to WebMD to find out what I could about "pretty severe high ankle sprains." And according to what the latest medical science can tell us, they tend to be located high on the ankle. And in most cases, can be "pretty severe." I'll leave no stone unturned to get you the information you deserve.

In the past, high ankle sprains held players out for up to multiple months. However, the new ‘Tightrope‘ surgery made popular at Jones’ alma mater Alabama can cut that down to just a few weeks.

There's a diagram in that link, but it is not for the squeamish. The thought of a surgical implement being jabbed through my quarterback's plant leg three weeks into a long season is more than I can handle. So instead I'll just watch the 1980s Clint Eastwood film Tightrope, listen to the Stevie Ray Vaughn banger of a song by the same name, or just rewatch this crackpot again. The thought of some weirdo plunging to his death in the bottom of a gorge is less disturbing to me than heading into Green Bay 10.5 point underdogs with a backup under center.

Which brings us back full circle to Axel Brian. Because leave us not forget, this is not the first time he's been pressed into emergency duty as the Patriots starting quarterback. On the road. Against a quality opponent. Getting double digits against the spread. He's been with the team that brought him into the league as a UDFA for parts of seven seasons. And got that one start in 2020. At Kansas City, when Cam Newton came down with Covid. Here is that game in picture form: 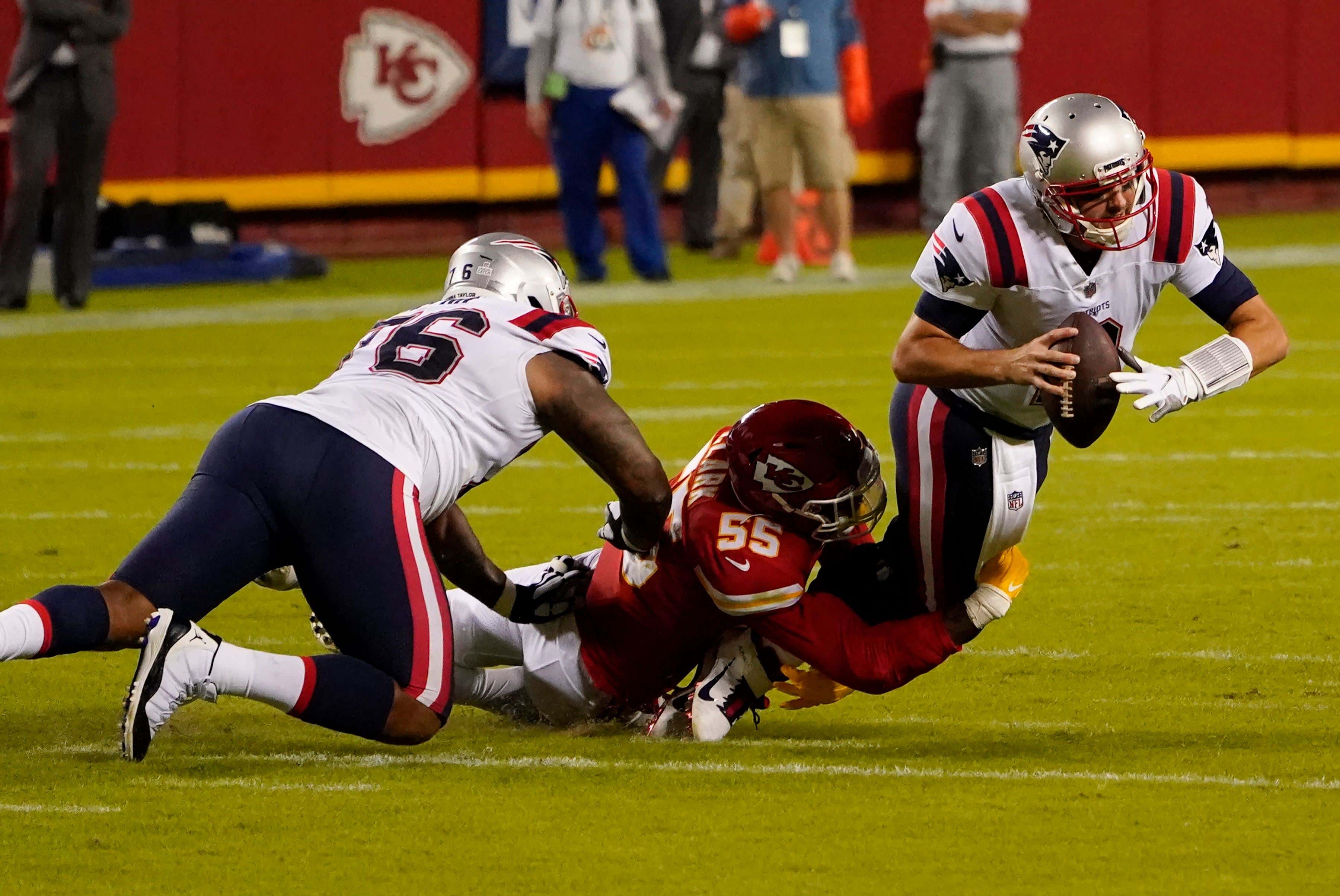 I exaggerate somewhat. But not a lot, if we're being totally honest.

The thing is, this game was actually close for a long time. Steve Belichick's defense kept it close for a good, long time. In the Chiefs' first six possessions they turned it over once and settled for just two field goals. They didn't get into the end zone until the final minute of the 3rd quarter. And Hoyer, with major contributions from Damien Harris, Rex Burkhead and James White put together two consecutive 13-play drives in the 2nd. The first stalled and had to end with a field goal. And the second? Ended in disaster.

After a catch and run by White put the Patriots in the Kansas City red zone only trailing 6-3, they used the last of their timeouts. And on 3rd & 6 from the Chiefs 13, he took this sack from Frank Clark and watched helplessly as the clock bled dry.

Then in the 3rd quarter and the game still 6-3, he led yet another sustained drive into the red zone, this one eating more than seven minutes off the clock. Only to take a sack from Taco Charlton and cough up the ball. Then Josh McDaniels (in happier times for him, believe it or not) metaphorically came out of the proverbial dugout and motioned to the abstract bullpen for Jarrett Stidham to come in in relief. On the day, Hoyer was 15 of 24, 62.5%, for 130 yards, 0 TDs, 1 INT and a passer rating of 59.4.

Here's what I wrote in the Knee Jerk Reactions:

--First we have to place the contactless delivery of this particular turd pizza on the front porch of the house where it belongs: Brian Hoyer's. Good guy. Great teammate. A true professional. The trust of his coaches to step in an emergency. All that. But he acted like in his 12 years in the league on seven different teams, he had never been in a meeting where they went over the importance of coming away with points in the red zone. I'm just astonished that on two possessions inside KC's 15, they scored zero points. First because he took a sack with no timeouts left after Bill Belichick called his third specifically trusting that Hoyer would know enough to either find an open receiver in the end zone or throw it off Andy Reid's windshield. And then he just made matters worse by feebly asking for time like he's Chris Webber, proving he'd lost count. He's lucky he didn't get called for a technical, with Mahomes shooting two. On the other failed red zone visit, he actually could've taken the sack and we would've applauded him for his sound judgment. Instead he once again did the one thing he couldn't do, which was lose the ball.

--When he wasn't doing that he was sailing throws, including that interception over Ryan Izzo's 6-foot-5 frame and 32 1/8-inch arms. On that one, Tony Romo tried going to his default setting as spokesman for the National Council on Excusing Bad Quarterbacking by saying what a great play Juan Thornhill made on the ball, but even he realized how dumb that sounded and changed the subject.

--To circle back to the Vice President analogy, when your leader is incapacitated for a while, all you want out of your No. 2 is to do no harm. The bottom-of-the-ticket candidate is just there to deliver some swing state and spend four years going to state funerals in other countries and that's it. If they get to sit behind the Resolute Desk for any reason, that's not the time to be making sweeping changes or take on some legislative agenda. Just take care of business until the boss gets back. That's not what Hoyer did. Instead of nice, safe swing passes to James White and quick, risk-free bubble screens, he tried to fling it. And he was not up to the task. For some reason he was fixated on Damiere Byrd of all people. Which I'd be all for if it were one of those "My favorite receiver is the one who's open" situations. But it wasn't. He was being covered as much as anyone. And now, to all the other things I didn't expect to happen in 2020, I can add that I'm typing the surreal sentence, "Patriots quarterback Brian Hoyer began forcing the ball to Damiere Byrd." At this point I've learned to embrace the weirdness.

Ouch. It goes on like that for paragraphs. Is that really how I write when things go bad? I might need to talk to my doctor about taking some of those prescription meds where the last 20 seconds of the commercial is just listing the side effects.

But the point being, this is what we're up against. This is the challenge at hand. Brian Hoyer, less than two weeks before his 37th birthday, forced to answer the Bat Signal in our hour of need and getting an improbable start. To steal a line from Julian Edelman, if he somehow can keep the Pats close enough that the defense, running game, special teams - or even in a perfect world, he - can somehow come back with this team 2-2, it's gonna be a hell of a story.