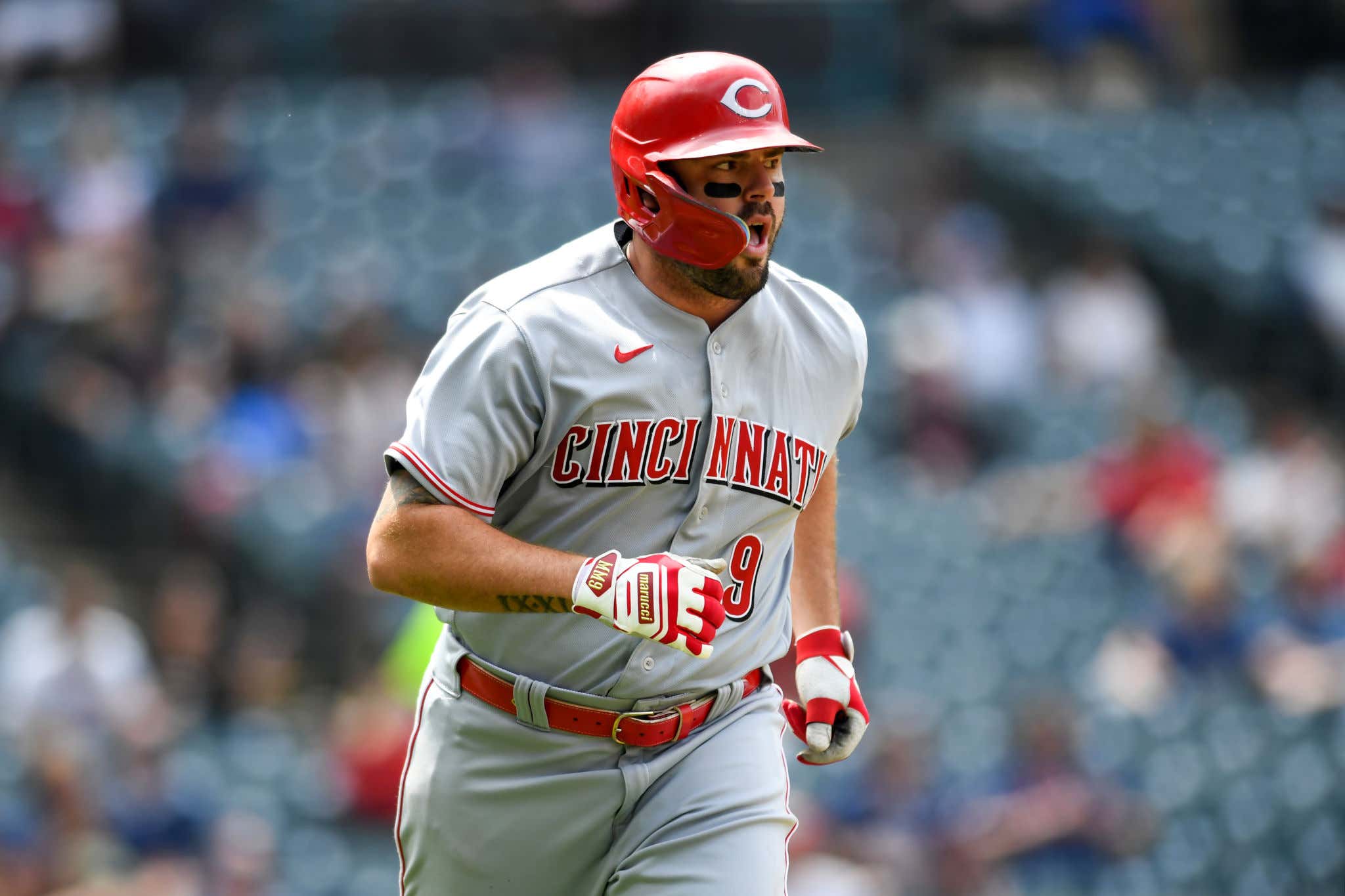 People are really giving me too much credit for going 5-1 on my picks for The Show Fantasy Football League last week, which is appreciated, but really not necessary. This week's games feature a heavyweight bout between 1st & 3rd place. 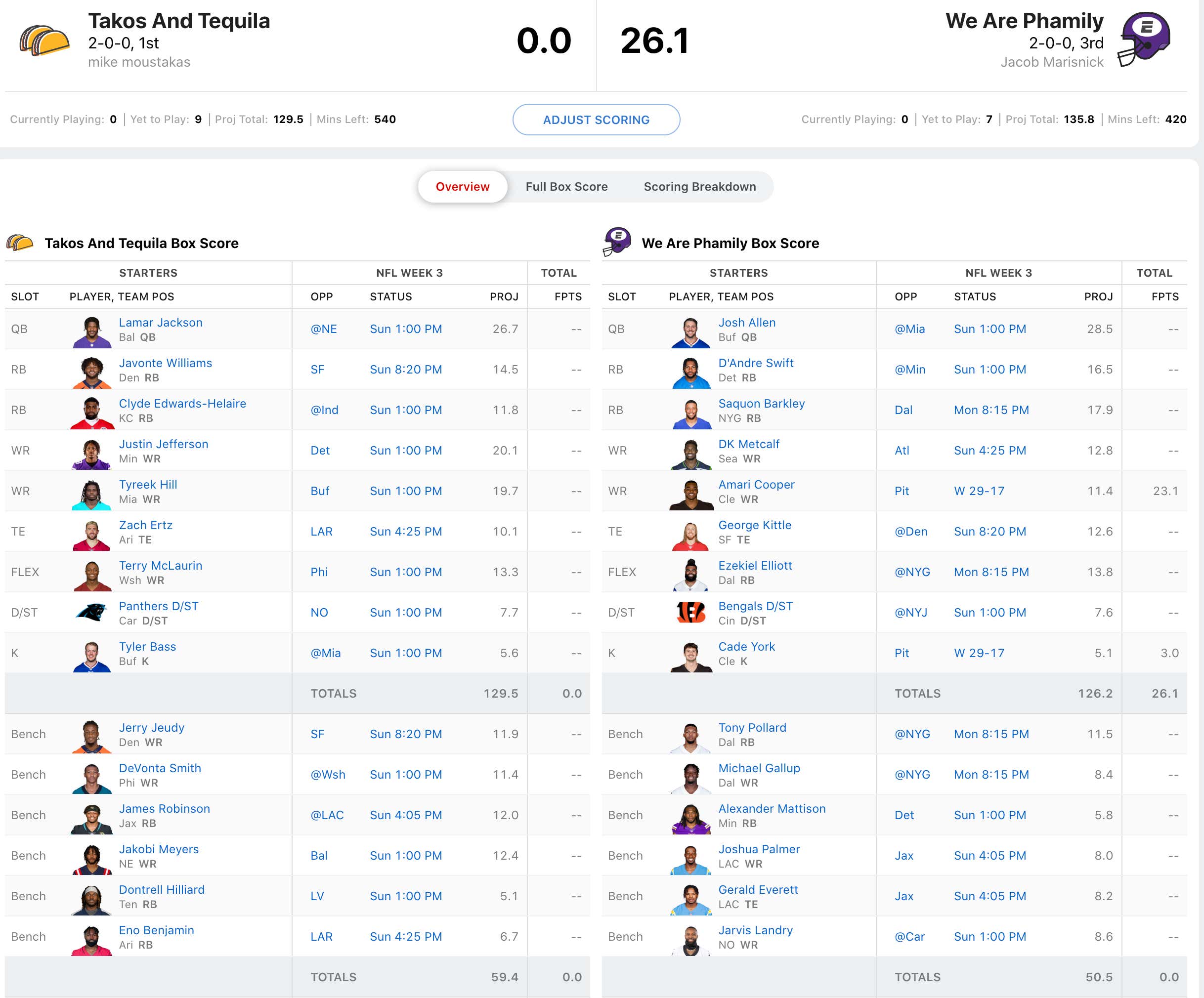 Mike Moustakas' team is an absolute wagon having scored 163 points in each of the first two weeks. His projection is quite a bit under that, but I wouldn't ever count his squad out. Although they do have a tough matchup this week with Jake Marisnick's squad that had Amari Cooper more than double his projection on Thursday Night. He'll also get his TE back in George Kittle this week. But this matchup will likely come down to Monday Night as Marisnick has both Saquon Barkley and Zeke Elliott in his starting lineup. Moose will ned big games from Justin Jefferson, who has torched the Lions, and Tyreek Hill who could see himself in a shootout vs. Buffalo. I will say that starting the Panthers D/ST is a bold choice, but I respect trying to get points for the inevitable Jameis Winston turnovers. 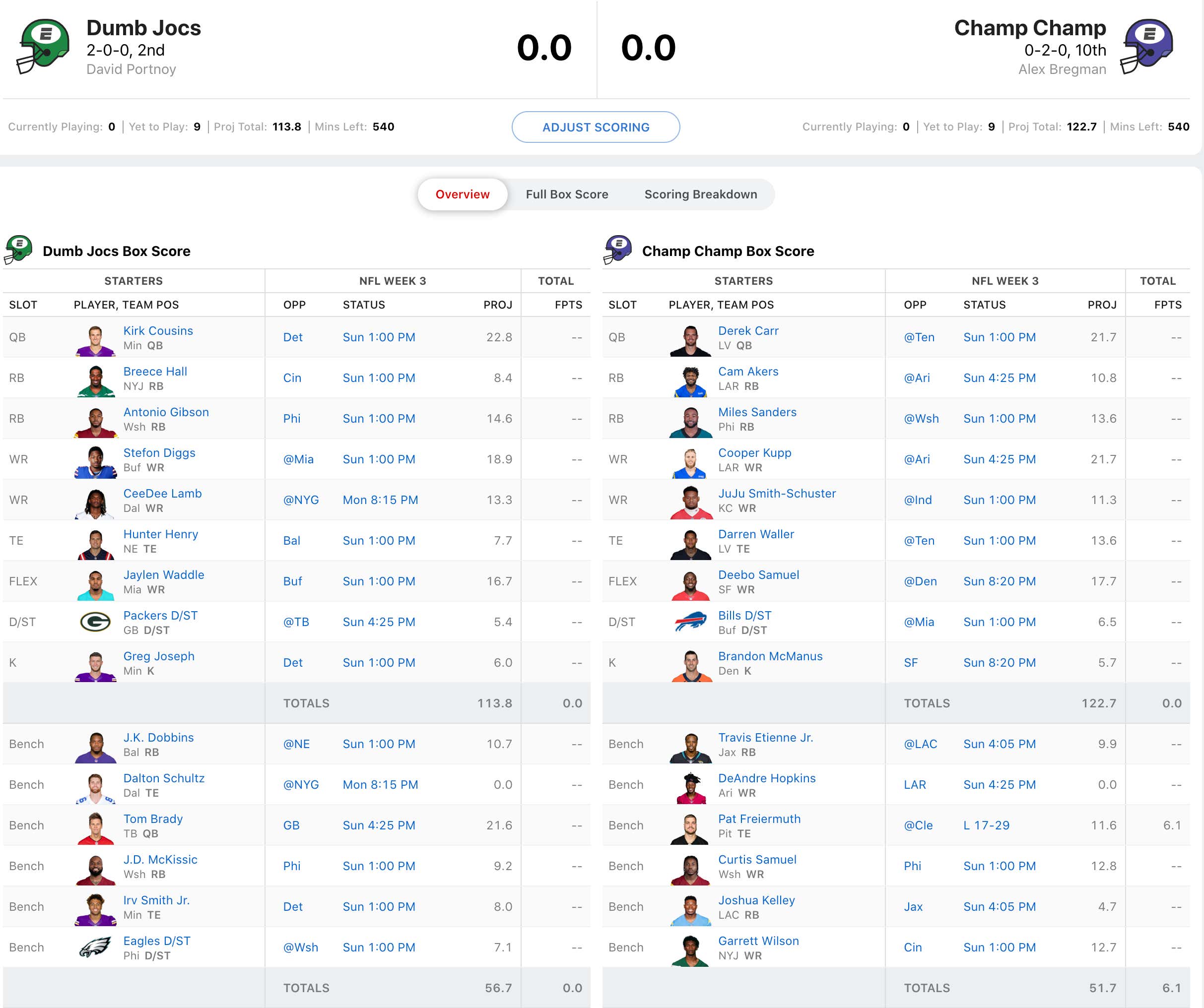 This is a pivotal game. Dave Portnoy has a chance to take 1st place in the league if this happens coupled with a Moustakas L. He'd also potentially put a stake in the heart of the defending champ, Alex Bregman. But Bregman's team has some pretty favorable matchups and is a 10 point favorite. His squad will likely live and die with the performance of Derek Carr and more specifically Darren Waller. But his WRs are terrific with Cooper Kupp, Curtis Samuel, and Deebo Samuel although Bregman is making the call to go with Juju Smith-Schuster over Curtis Samuel in a move that could make or break his week. The Bills D/ST could end up biting Bregman here in a potential shootout vs. the Dolphins and he did not make a move, choosing to keep a backup TE on his roster instead. Portnoy meanwhile has gotten stellar play out of his WRs, especially Stefon Diggs and Jaylen Waddle. Once Dak Prescott gets back, CeeDee Lamb should be jettisoned up the rankings and this squad will be a very tough out. Dave has an interesting decision this week at RB with JK Dobbins looking like a go vs. a New England team that Baltimore has fared well against historically. He did choose to go with his guy Hunter Henry at TE over Irv Smith Jr. in what could be a pivotal decision. Also at D/ST, does he go with the Packers, who should hold the Bucs to a lower point total, or the Eagles going against the turnover-prone Carson Wentz? This has a shot to be another Monday Night tightrope walk for Dave with Lamb closing the week out in under the lights on MNF. 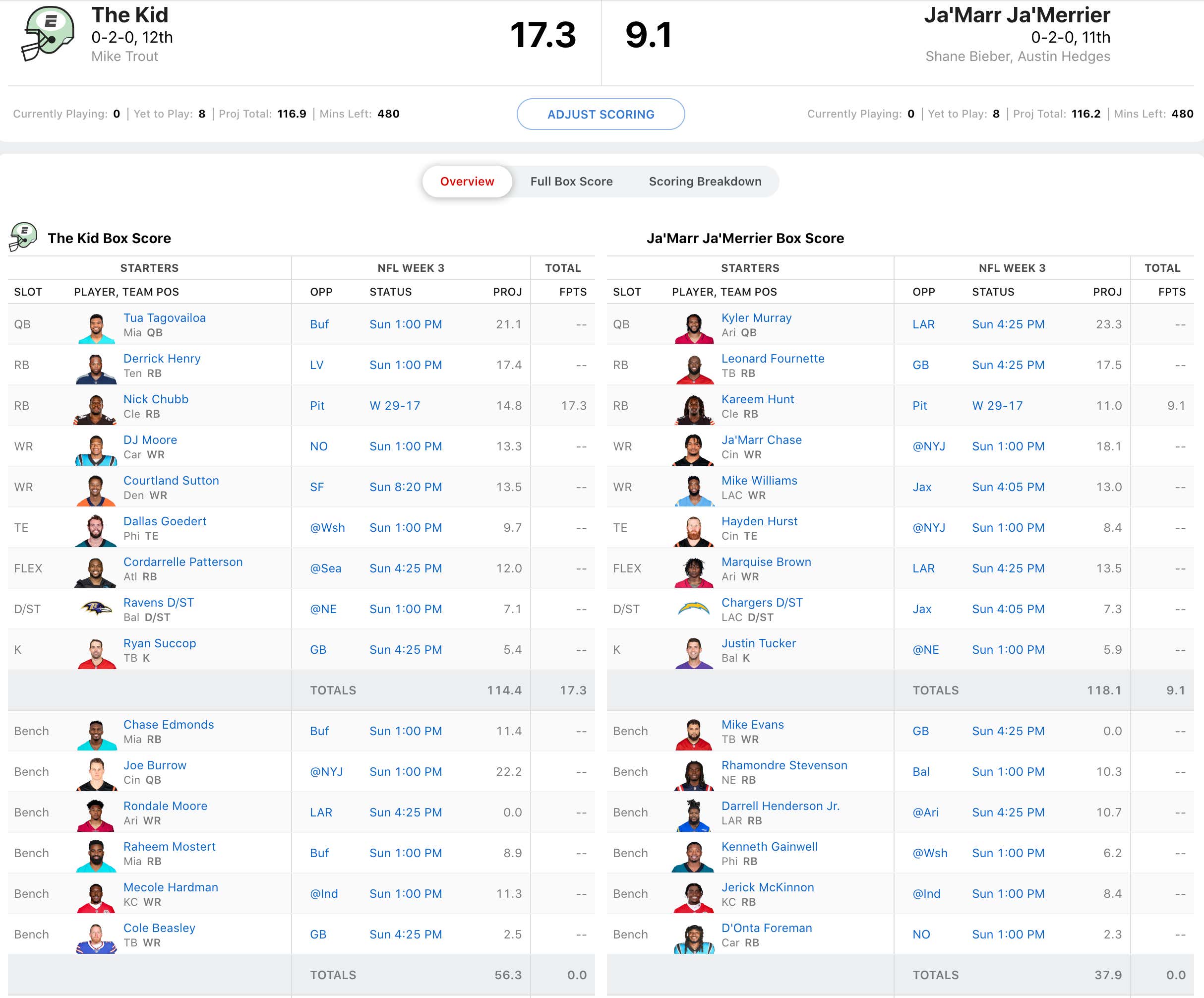 A battle of the two last place teams with both squads NEEDING a W. Mike Trout's team actually has a bunch of great matchups and already had their Browns RB outperform his projection on Thursday Night. The Cleveland Guardians duo of Shane Bieber and Austin Hedges weren't quite as lucky as Kareem Hunt fell 1.9 points below his projection. I actually love Trout's chances this week as Derrick Henry has a great matchup vs. the Raiders in a game I could actually see Tennessee winning. Burrow threw 3 TDs vs. the Jets last year and DJ Moore is waiting to go off. The Ravens D/ST gets a struggling Mac Jones too. Ja'Marr Ja'Merrier will need a big game from their stack of Kyler Murray and Hollywood Brown to pull this one out, which is certainly possible against a Rams team that has given up their fair share of points this season. 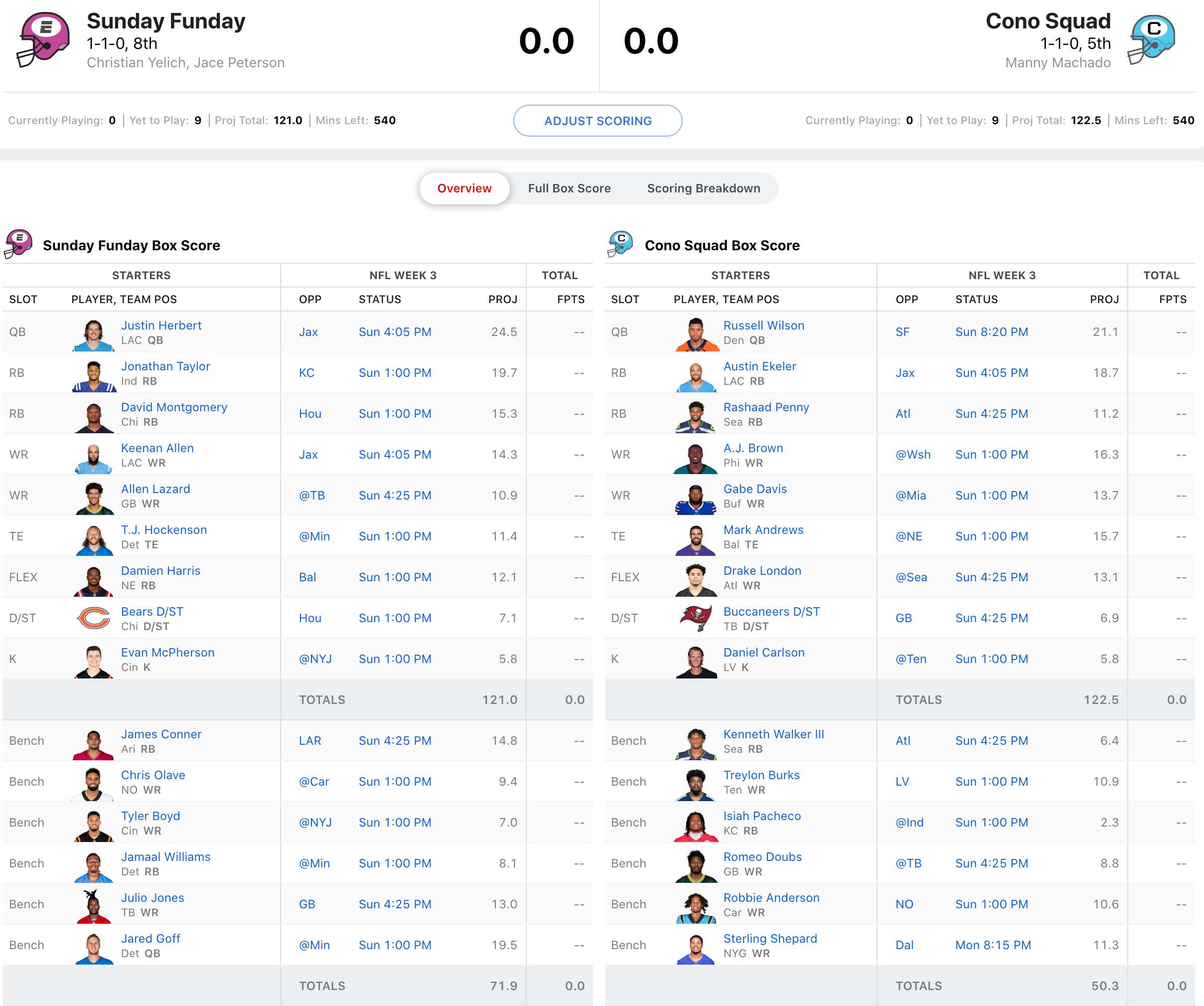 Don't look now, but the squad I wanted to give an incomplete to at Draft time because of all their unknowns managed by Manny Machado could be a juggernaught. If Russell Wilson can get it together, he'll have a good QB, top 5 caliber RB, and a monster WR unit with A.J. Brown, Gabe Davis, and Drake London. Romeo Doubs will get his shot to break out today with Sammy Watkins now on IR. He's my team to watch the rest of the way. Sunday Funday is in a tough spot with Justin Herbert's injury and with his game not til 4:05pm, Jared Goff as a backup isn't ideal. He'll likely move Herbert to IR and fill the roster spot Marcus Mariota, Trevor Lawrence, or Daniel Jones. All of which aren't very inspiring. The status of Herbert will definitely affect Keenan Allen, but I can see a huge game coming from Jonathan Taylor. The Colts got their brains beaten in last week and I expect a big time commitment to the run vs. KC. But will it be enough? 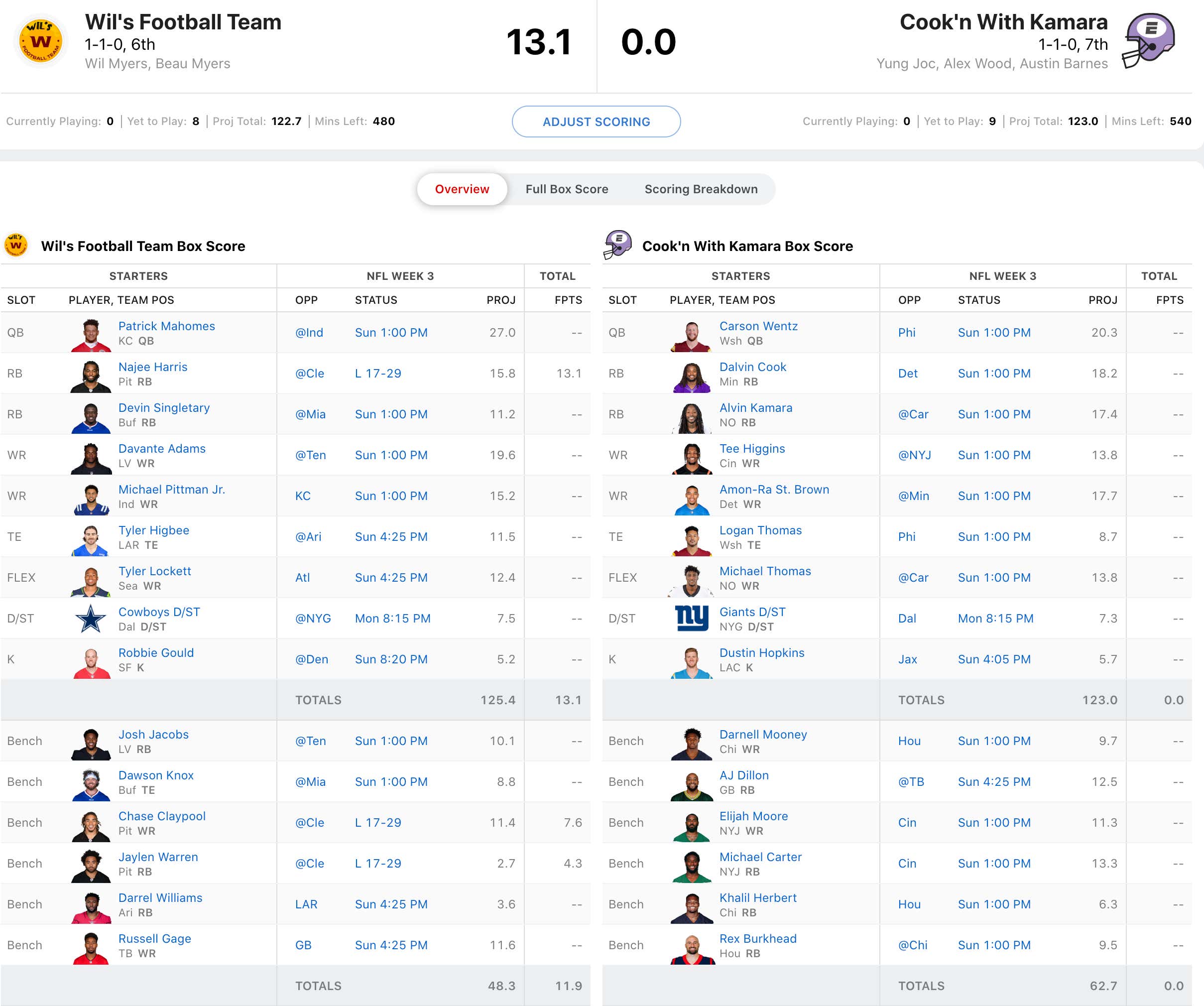 This game is essentially a dead heat between Wil Myers and Joc Pederson and a lot of it will come down to how well Carson Wentz plays in his first game vs. the Eagles since being dealt from them. Amon-Ra St. Brown is cooking, but Cook'n With Kamara almost has too much talent at some positions like RB and not enough at QB and TE. The FLEX spot is a weekly tough decision and this week they're sitting AJ Dillion. I do like the matchups on Will Myers team better, with Devin Singletary going back home to Miami, Davante Adams coming off a tough game, Michael Pittman Jr. was out last week and Tyler Lockett in what could be a sneaky high scoring game in the Pacific Northwest. Will changing Kickers (Mason Crosby => Dustin Hopkins) work out for them or is that too dangerous of a game? 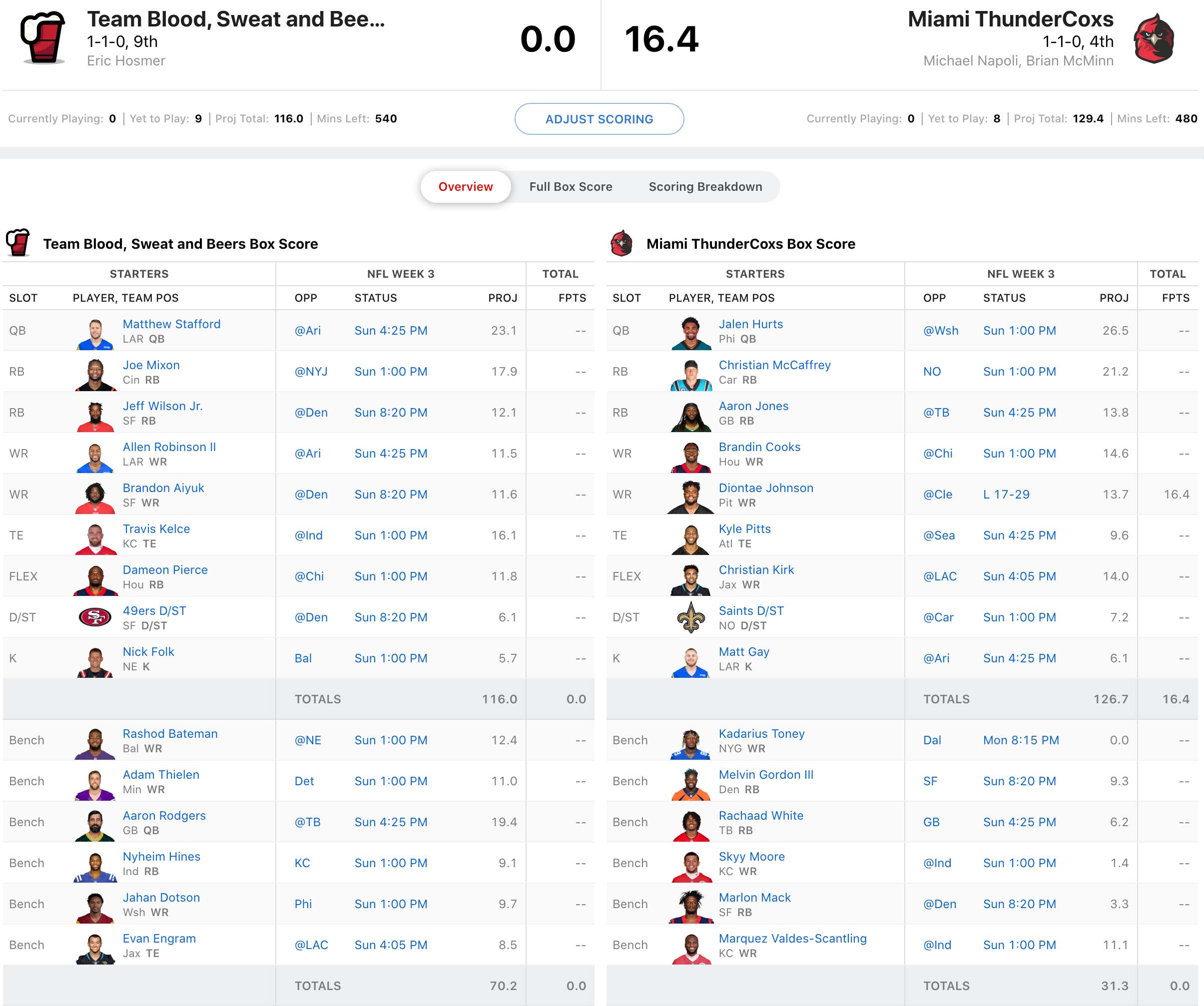 Eric Hosmer is reeling, and another guy to swap Kickers this week (Jake Elliott => Nick Folk). Outside of QB1, RB1, and TE1, his roster is void playmakers with very high ceilings. He may be best served trying to deal Aaron Rodgers or Stafford to improve in other areas, but he also needs Travis Kelce to be a top 2 TE every week to make up for the rest of his roster, which has potential, but is still growing. Mike Napoli's squad put on a show last week led by Jalen Hurts and Aaron Jones, but he'll need more consistent production out of Kyle Pitts to justify his Draft spot. But he got a nice performance on Thursday Night Football from Diontae Johnson who outdid his projection by 2.7 points.